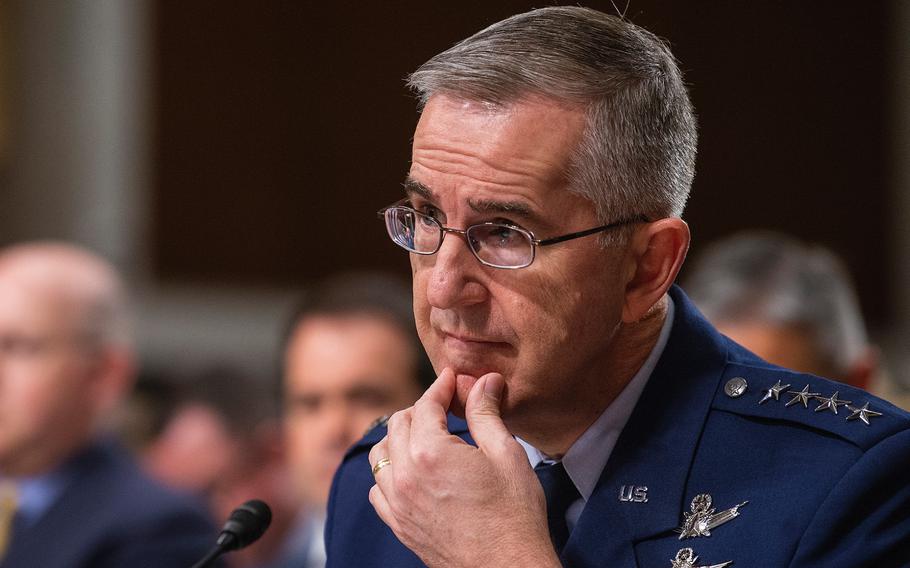 Buy Photo
Commander of the U.S. Strategic Command Gen. John Hyten listens to a question while testifying on Thursday, April 11, 2019, during a Senate Armed Services Committee hearing on Capitol Hill in Washington. (Carlos Bongioanni/Stars and Stripes)

Buy Photo
Commander of the U.S. Strategic Command Gen. John Hyten listens to a question while testifying on Thursday, April 11, 2019, during a Senate Armed Services Committee hearing on Capitol Hill in Washington. (Carlos Bongioanni/Stars and Stripes) 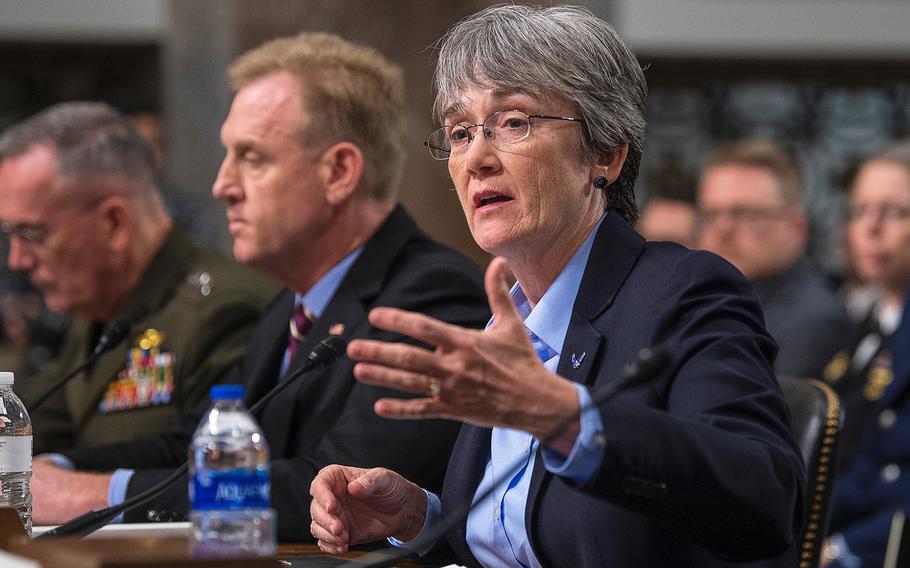 WASHINGTON — The Air Force wants some of its best officers to spend time recruiting or instructing future officers in ROTC and entrance training, and it is offering incentives designed to make such duties more attractive, service officials announced Thursday.

The Air Force secretary will instruct promotion boards to heavily weight officers’ experience in those duties away from their normal career assignments when they consider them for promotions, Lt. Gen. Brian Kelly, the service’s personnel chief, told reporters at the Pentagon last week. That new instruction will officially take effect next year.

“We’re trying to make sure that we as an Air Force are truly valuing the need and the emphasis on that baseline foundational instruction and recruiting [which is] really important to us in developing the Air Force that we need,” Kelly said. “We want the Air Force … to value those [recruiting and instruction] duties and understand the contribution those officers are performing. The contribution is large. It’s the key foundation for what we do as an Air Force.”

Other incentives that the Air Force will offer to officers selected to serve in recruiting and instruction include deployment exemptions while in those positions and assignments as short as two years when possible, the ability to enter a preference to serve at one’s alma mater when possible for officers selected for ROTC instruction, and they will receive preference for their next assignments, the Air Force said.

Kelly said the most talented officers in the Air Force have not been attracted to serving in recruiting or instruction in recent years because it was seen as potentially detrimental to their careers. Essentially, it looked better to promotion boards to take other assignments, such as in the joint force or in roles supporting combat operations. The general said it means future Air Force officers are not being taught by the best the service has to offer.

Serving in those jobs is also going to provide officers new skills that they can bring back to their normal career-field jobs including increased communication and teaching abilities, Kelly said.

He said the Air Force has already observed such increased skills for enlisted airmen who serve special-duty assignments as recruiters or instructors.

“When they come back out of that and come back into their functional career fields, the Air Force looks at them and their performance, and they typically get promoted at a higher level than their peers,” Kelly said.

The Air Force will soon ask its commanders to identify top officers and nominate them to serve in recruiting and instruction assignments.

The service has about 3,500 officers serving in recruiting and instructing positions, which it does not intend to change, officials said.

Officers interested in applying for such duties should update their preferences in the Air Force’s online personnel program, MyVECTOR, starting Monday until May 24. To be considered for those positions, officers must be endorsed by their commanders or senior raters, according to the Air Force.

“Being an instructor or recruiter helps to shape the future force, but, in the past, we have not rewarded officers who do this important work,” outgoing Air Force Secretary Heather Wilson said in a statement. “We gave it lip service. We’re changing that. This is just one more part of our effort to improve the way we develop, assign, evaluate and promote airmen.”