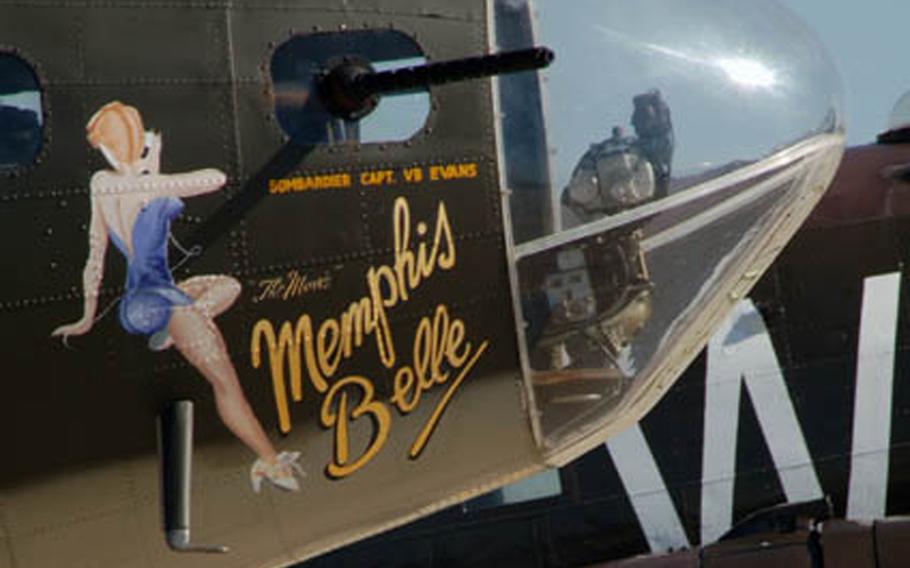 The painted nose of the Memphis Belle, a B-17 Flying Fortress. The Air Force announced Friday it had found hundreds of examples of pornography and tens of thousands of other inappropriate items, including photos of painted aircraft nose art, listed under "inappropriate/offensive." (Haley Zimmerman/Courtesy of the U.S. Air Force)

WASHINGTON — The Air Force announced Friday it had found hundreds of examples of pornography and tens of thousands of other inappropriate items in a recent sweep of bases and facilities worldwide.

Welsh’s order came on the heels of media reports of sexual harassment and hostile working conditions for female airmen, and in the midst of a growing scandal centered on Joint Base San Antonio-Lackland, Texas, over sexual misconduct by Air Force instructors toward trainees.

Gen. Larry Spencer, the Air Force vice chief of staff, told Stars and Stripes on Friday that the inspection was aimed at making sure current policies and standards on workplace conduct are being enforced. There were “no issues” found at most installations, he said.

The majority of 631 items deemed pornographic were uncovered in Air Education and Training Command, which oversees training at Lackland and other bases. While most were items like magazines or computer videos that were removed or deleted, investigators also identified 11 pornographic computer images that were “preserved for evidence,” according to a database provided by the Air Force.

Air Force officials said they could not comment the images, which could be part of a criminal investigation.

The Air Force found 3,987 examples of “unprofessional” items, including so-called “doofer books” maintained by squadrons that contain inappropriate content, and in one case, pubic hair in a log book kept in an office at Air Force Global Strike command.

“We don’t want to paint over the Memphis Belle,” said Air Force spokesman Maj. Joel Harper. But, he added, commanders had broad discretion to decide what crosses the line.

“You’re going to have folks view this in different ways,” Spencer, the Air Force vice chief, said. “I don’t view this as being politically correct. I see it as making sure our airmen are respected.”

That fact “intentionally or unintentionally provided servicemembers the time to hide the content, and the opportunity for commanding officers to not find anything,” Parrish said. “The sweep was executed by commanding officers who had an incentive not to find anything that would reflect poorly on the command climate they are charged with maintaining.”