Ahead of next week's live-broadcast forum, Trump and Clinton vie for veterans' votes 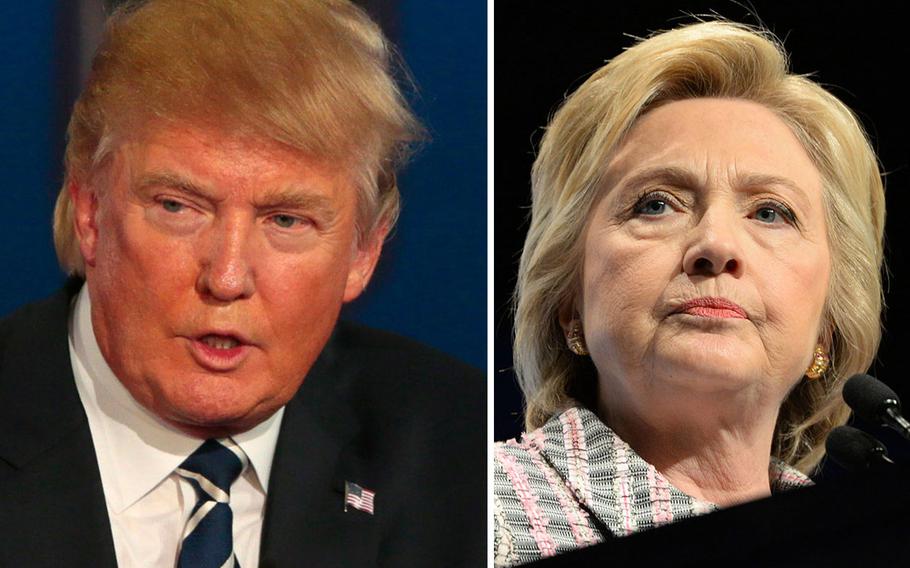 WASHINGTON — Donald Trump on Thursday followed his Democratic presidential rival with a speech to veterans in Ohio vowing to make U.S. schooling more patriotic, overhaul the Department of Veterans Affairs and rebuild the military.

A day earlier, Hillary Clinton appealed to Republicans in the crowd gathered for the American Legion national convention in Cincinnati, saying Trump threatens the United States’ standing as an exceptional nation and top global leader.

The dueling Ohio speeches put a spotlight on veteran issues and set the candidates’ tone as they prepare for a rare, live-broadcast forum Wednesday hosted by Iraq and Afghanistan Veterans of America. Trump and Clinton are scheduled to appear before an audience of active-duty troops and veterans.

On Thursday, Trump told the convention it is “very sad” how the American flag is treated, alluding to school controversies in recent years over the “under God’ phrase in the Pledge of Allegiance, and said one of his top goals is to work with the Legion to instill a new appreciation of patriotism among students.

The central focus on public schools and respect for the American flag is a new tactic to woo veteran voters, and it drew applause from the thousands gathered Thursday in Cincinnati. It might also be a preview of his approach at the coming forum with Clinton.

“In a Trump administration I plan to work directly with the American Legion to uphold our common values and to help ensure they are taught to America’s children,” Trump said. “We want our kids to learn the incredible achievement of America’s history, its institutions and its heroes. Many of whom are with us today, I can tell you, including by the way two special people -- Mayor Rudolph Giuliani and Sen. Jeff Sessions.”

Trump said he would unite the country under a common culture and values, which would include “always” saluting the flag. Giuliani, who was mayor of New York City during 9/11, and Sessions, an attorney and former officer in the Army Reserve, have been devoted Trump surrogates, even as his campaign has cleaved the Republican party.

The real estate mogul and reality TV star also told the audience in Cincinnati that he will expand veterans’ access to private health care through the VA to end sometimes dangerous waits for treatment.

“Never again will we allow any veteran to suffer or die waiting for care,” he said.

His 10-point VA plan, which Trump laid out in July speeches, also calls for replacing current VA Secretary Bob McDonald, a commission to investigate department wrongdoing, a 24-hour veteran hotline in the White House, and better care for female veterans.

For the military, the GOP nominee told veterans he will create a new foreign policy and end an era of U.S. nation-building in Iraq and Afghanistan, which he has called a failure. Instead, his administration would focus on drawing new allies into the fight against the Islamic State group in the Middle East.

Trump has said new U.S. allies could include Russia, which is a controversial move because many Republicans view it as a belligerent foe.

Clinton on Wednesday charged Trump with kowtowing to Russian President Vladimir Putin and said he would risk international alliances forged by American troops who fought and died — two issues that have rankled members of Trump’s own party.

Dozens of Republican foreign policy experts who back a more traditional role for the United States abroad have come out against Trump due to the GOP nominee’s brash foreign policy proposals and incendiary rhetoric, including his softer stance toward Russia.

Clinton took the opportunity before the politically mixed crowd of veterans at the convention to appeal repeatedly to anxious Republicans in a bid to draw supporters from the party.

Clinton told the veterans that Trump has abandoned the concept of American exceptionalism, which posits the country is so powerful and influential that it has a responsibility to lead, by striking a conciliatory tone with foes and threatening to back out of alliances such as the NATO pact.

Clinton sought to contrast Trump’s foreign policy proposals — and the Republican divisions surrounding them — with her work building the current U.S. foreign policy framework as a senator from New York who sat on the Armed Services Committee for about six years and served as secretary of state under President Barack Obama.

The Iran nuclear deal, reductions in Russian nuclear weapons and a national coalition to fight the Islamic State group without getting the United States involved in another group war in the Middle East have been successes during that period, according to Clinton.

“You don’t build a coalition by insulting our friends or acting like a loose cannon,” she said.

However, the Iran deal and ongoing war have been deeply criticized by Republicans as instances of failed foreign policy under the Obama administration.

As in past speeches, Clinton also pledged to reduce the national epidemic of suicides, help veterans get civilian jobs, put more resources into post-traumatic stress and traumatic brain injury treatment, and protect the VA health care system from privatization.

“We are going to reform and strengthen [the VA], not privatize it,” she said.