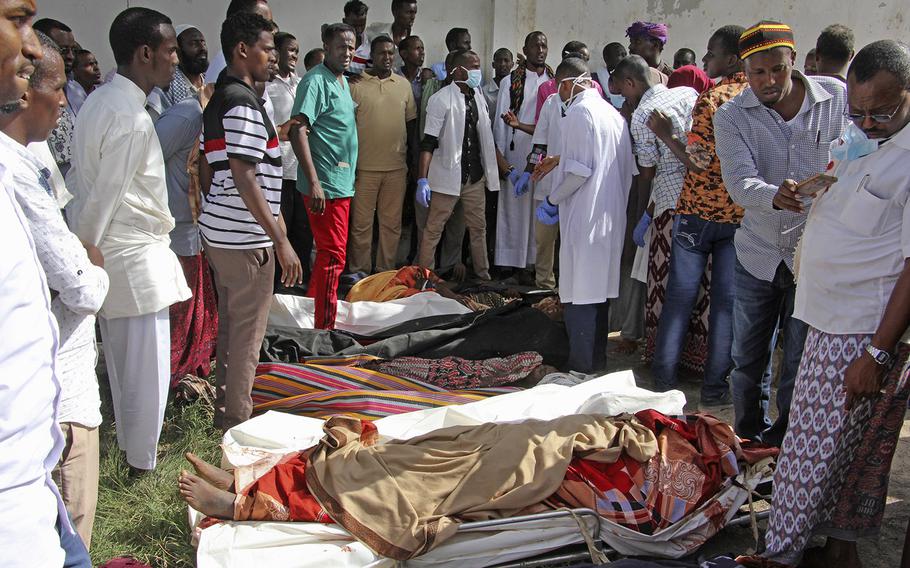 Somalis observe bodies which were brought to and displayed in the capital Mogadishu, Somalia Friday, Aug. 25, 2017. (Farah Abdi Warsameh/AP)

STUTTGART, Germany — Somalia officials said Friday they are investigating claims that civilians were killed in a raid carried out against al-Shabab fighters west of Mogadishu, a region where U.S. troops routinely accompany local forces in a supporting role.

U.S. Africa Command said it also is investigating the incident.

The Somalia government initially denied any civilian casualties, saying eight militants were killed in an assault on a farm in the village of Bariire, where al-Shabab is known to operate.

“Our security forces go to great lengths to prevent civilian casualties during all of our activities. No civilians were harmed or killed in this operation,” Somalia’s ministry of information said in a Facebook posting.

Hours later, the Somalia government amended its initial characterization of the operation.

“It appears that there were different security operations that took place in the same area,” the information ministry said. “We also understand that there are civilian casualties in which the federal government is investigating to find out the truth about this.”

A local deputy governor in Somalia’s Lower Shabelle region told reporters earlier that government forces accompanied by foreign troops on a raid killed 10 civilians, according to a report by The Associated Press.

AFRICOM confirmed U.S. forces were on a mission in the area with Somali forces as part of an effort to support the government in its battle against extremists in the country.

In its initial report, Somalia officials described the assault on the farm village as one focused on militants.

“Al-Shabab started shooting at [Somalia National Army] forces after our soldiers entered the farm,” Somalia’s information ministry said. “The individuals shooting at the SNA soldiers were al-Shabab fighters. They were not farmers. We talked to the farmers in the area and instructed them to put their weapons in their homes to avoid confusion."

In recent months, the United States has stepped up its support of Somalia’s fledgling government and its armed forces. For years, a collection of African militaries have battled al-Shabab inside Somalia. But forces involved in that effort, conducted under the African Union, are scheduled to begin withdrawing from Somalia in 2018.

Al-Shabab, which seeks to impose a strict form of Sharia law on Somalia, had been on the defensive in recent years but has begun to reassert itself with more frequent attacks in the past year.

AFRICOM has boosted its training mission in the Somalia, where U.S. special operations forces also are deployed along the front lines.

The aim is to ready Somalia’s military to conduct combat operations independent of the African Union force.

While al-Shabab has expressed a desire to conduct strikes against the West, to date its operations have been concentrated inside Somalia and its immediate vicinity.