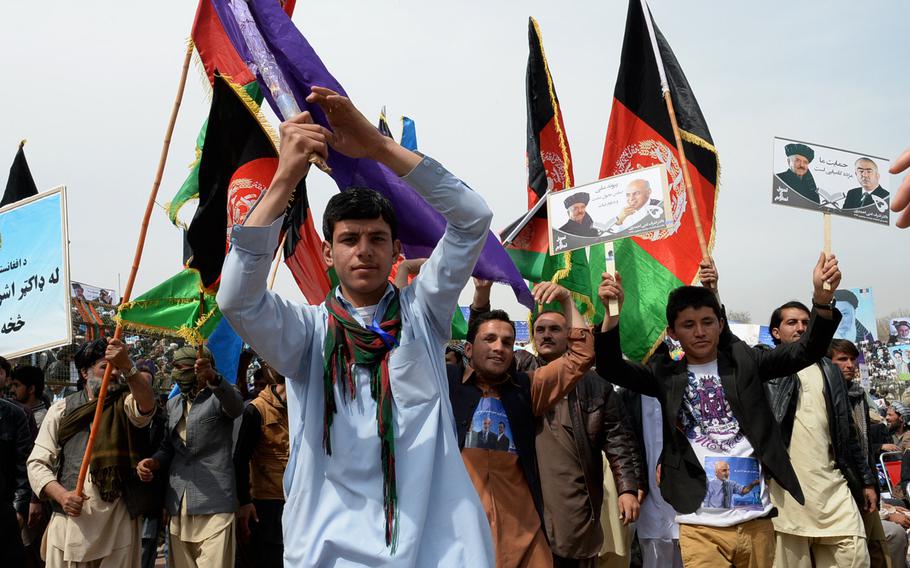 Afghans wave flags and banners as they march at a rally for presidential candidate Ashraf Ghani in Kabul on April 1, 2014. Jubilant rallies contrasted with fears of violence and concerns over corruption as Afghans went to the polls. (Josh Smith/Stars and Stripes)

Afghans wave flags and banners as they march at a rally for presidential candidate Ashraf Ghani in Kabul on April 1, 2014. Jubilant rallies contrasted with fears of violence and concerns over corruption as Afghans went to the polls. (Josh Smith/Stars and Stripes) 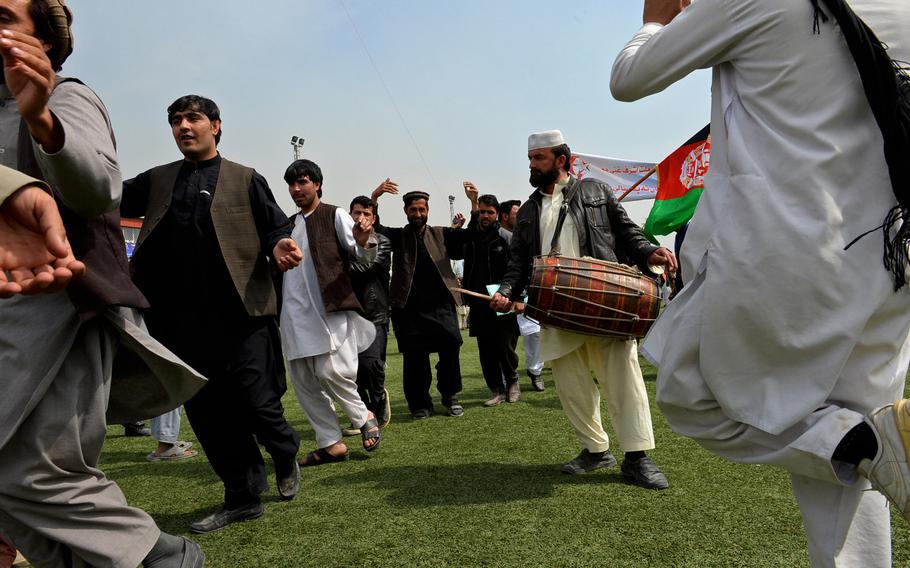 Afghan men dance to a drum at a rally for presidential candidate Ashraf Ghani in Kabul on April 1, 2014. Joyful rallies took place against the background of a rash of terrorist attacks in the run-up to the poll. (Josh Smith/Stars and Stripes) 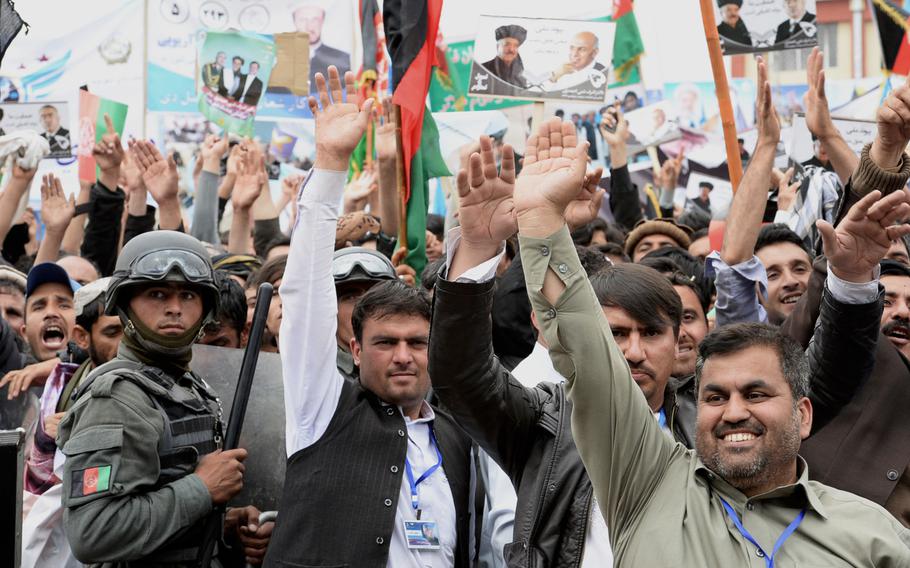 Afghans cheer at a rally for presidential candidate Ashraf Ghani in Kabul on April 1, 2014. Such rallies often attracted thousands in the larger cities, while in rural areas, security fears were expected to keep many would-be voters at home. (Josh Smith/Stars and Stripes)

KABUL — Afghans are facing Saturday’s pivotal presidential election with both hope and fear.

Following a series of high-profile attacks ahead of the election, the Taliban have threatened to target polling centers, election workers and voters. The insurgents have also launched a campaign of intimidation that has some Afghans — particularly in rural areas where there is still heavy Taliban influence — vowing to stay home.

But others — especially in better-protected towns and cities — are adamant that this election — the first democratic transfer of power in the country’s history — marks an opportunity to steer the war-weary country toward a more prosperous and peaceful future.

“If our country wants to go toward better democracy, then the vote of a single Afghan is very important, and I think that is why my vote is crucial,” said Hamid, a 24-year-old student who attended a rally for Abdullah Abdullah, one of the front-runners, in Panjshir, northeast of Kabul earlier in the week. “If we defended our country yesterday by guns, we can save our country today by votes. So that’s why I’m here.”

The election comes at a critical time for Afghanistan. NATO’s military coalition is planning to withdraw its combat troops by the end of the year and insurgent groups led by the Taliban remain an intractable presence.

President Hamid Karzai is barred from running again, opening the door for fresh leadership regardless of which of the eight candidates succeeds him.

In Afghanistan’s cities, campaign rallies by the major contenders have often attracted massive crowds celebrating, cheering and jostling for a chance to see their favorite candidate.

Messages of defiance make the rounds on social media as many Afghans with access to modern technology say they refuse to be intimidated by threats of violence. And many Afghans’ enthusiasm has not been dampened by concerns that rampant corruption could skew the result.

At a rally for another leading contender, Ashraf Ghani, in Kabul this week, hundreds of unveiled Afghan women joined the crowd, contrasting with the bloody history of the stadium where the event was held, which was once known for hosting public executions under the Taliban.

Even in the traditionally violent southern province of Helmand, where coalition and Afghan troops have fought a long and bloody war against the Taliban, many Afghans say they are ready to face the risks, Habiba Sadad, a member of parliament from the province asserted.

“We are not afraid of their threats,” she told Stars and Stripes by phone. She predicted that many more women would participate in Saturday’s election than in 2009.

Still, even optimists like Sadad acknowledge that Taliban intimidation and the threat of violence mean many Afghans in more rural areas will not cast votes.

The risks also make corruption in those areas more likely as observers are less able to monitor the polling stations.

“Each and every center and worker of these elections is in peril and wide range attacks are to be launched throughout the country,” the Taliban said in a statement released Thursday online. “Therefore, if anyone tries to participate in these elections and consequently he is harmed, he himself will be held responsible for it.”

Although the Taliban have so far failed to achieve their goal of fully disrupting the election, a rash of violence in recent months has led to a siege mentality in Afghanistan’s capital, where all the main highways running in and out of the city have been shut down. They will reopen only after the election.

That provides little comfort to Afghans in the most rural and dangerous areas.

In the Shultan Valley of Kunar province, a dangerous area on the border with Pakistan, members of the Taliban have been leaving letters at mosques threatening citizens who may decide to participate in the election, said a resident who asked to be identified only as Awalkhan for his own security. Imams at those mosques have been reading the Taliban threats to their audiences, he added.

“People are really worried about the security of the election,” Awalkhan told Stars and Stripes by phone. “No one feels safe to even tell relatives if they plan to vote.”

While some candidates have offered rides to take people to safer locations to vote, Awalkhan said that doesn’t help if the Taliban discover that someone has voted.

Mohammad Asif, a resident of Uruzgan province, expressed the mix of fear, defiance and hope that will mark the elections. He said he had moved his family to the provincial capital of Tarin Kowt during the election because of Taliban threats, but that he plans to vote.

“There is tension in our area,” he said. “The Taliban are very strong there, so we came to Tarin Kowt for safety and to freely vote during the election.”