Afghan president Ghani thanks US military for work, sacrifice 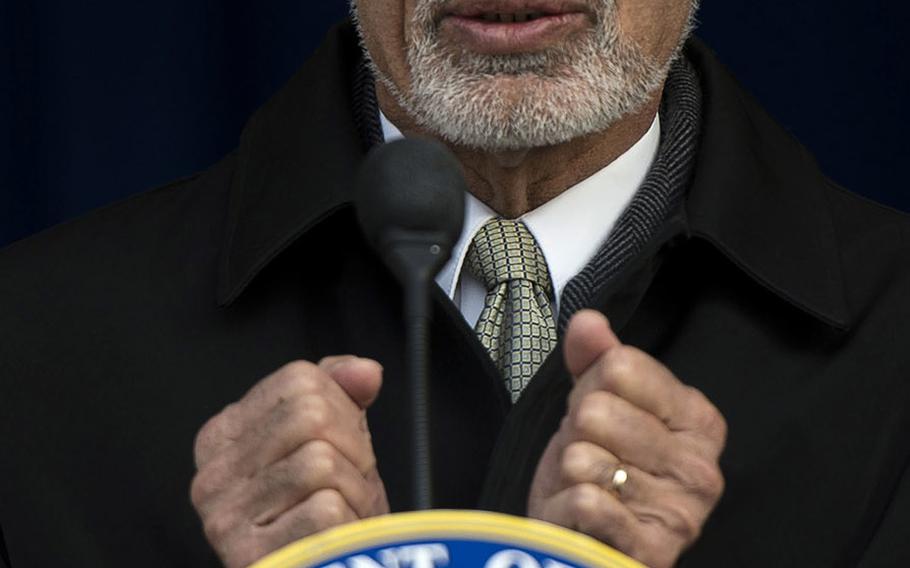 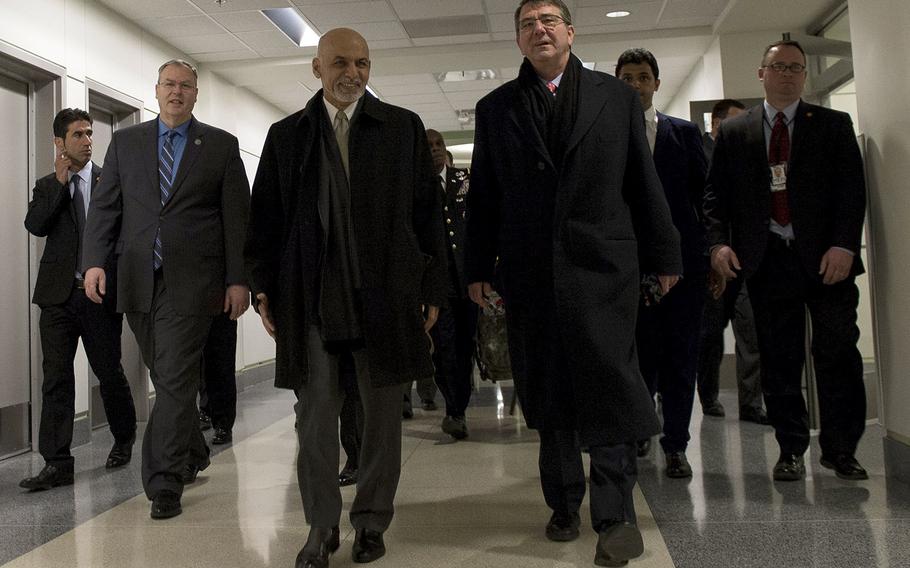 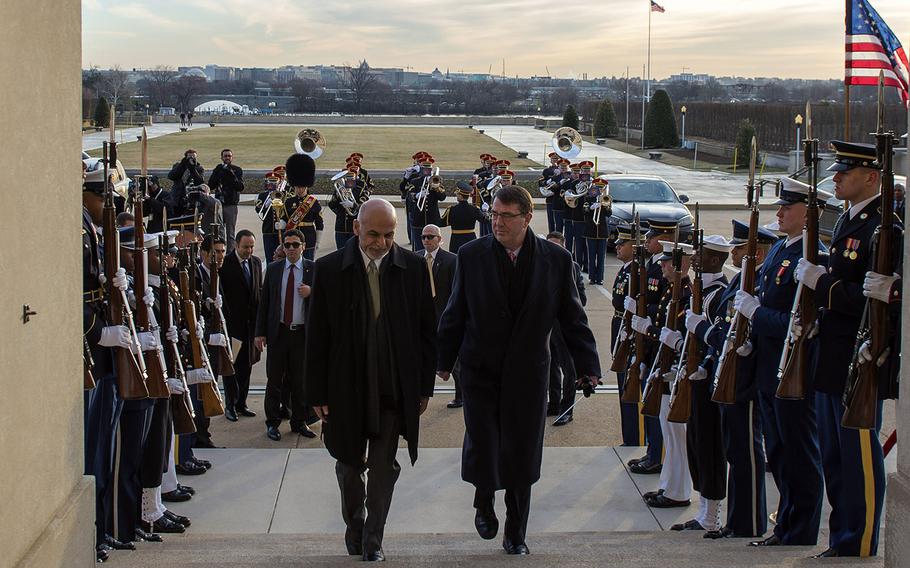 Secretary of Defense Ash Carter walks up the steps to the Pentagon with Afghan President Ashraf Ghani, March 23, 2015. (Sean Hurt/DOD)

WASHINGTON – Afghan President Ashraf Ghani visited the Pentagon on Monday to thank U.S. troops and veterans who served and sacrificed in Afghanistan.

“It’s a rare pleasure to be with you today … to say thank you on behalf of a grateful nation to people in this building and the larger U.S. community who have sacrificed continuously since September 11th to bring us freedom and hope,” Ghani told hundreds of servicemembers, veterans, military families and officials gathered in the courtyard of the Pentagon, where almost 200 people died after terrorists crashed a plane into the building in 2001. “Each one of you has left a legacy.”

In the audience was retired Army Col. Susan Myers, the widow of Army Maj. Gen. Harold Greene. Greene was killed last year in an insider attack at the Marshal Fahim National Defense University in Afghanistan, making him the first general officer killed overseas since the Vietnam War.

Also in attendance was Army Capt. Jeremy Haynes, who was severely wounded in the same attack that took Greene’s life. After multiple operations and a recovery period at Walter Reed, Haynes defied expectations and was able to walk again.

After pointing out the physical toll that the war has taken on the U.S. military, Ghani referenced the psychological wounds that many troops have suffered.

“I also understand that Afghanistan has marked you,” he said. “When you wake up at night, sometimes you’re not sure whether you’re back there or here.”

In addition to the price paid in blood, the American war effort cost nearly $700 billion, and more than $100 billion has been allocated for reconstruction projects.

Ghani highlighted the development efforts that U.S. troops and other Americans made, and thanked American taxpayers for contributing their “hard-earned dollars” to his country.

“You were not there just to fight,” he said. “You built schools, you built dams, you built roads … The physical infrastructure is great and it’s changed lives.”

He ended his remarks by saying he hopes Afghanistan War veterans will someday return to his country in a much different role.

“We hope to welcome you in Afghanistan as tourists, as civilians revisiting with your loved ones the peaks, the deserts, the valleys, the hopes of people that your loved ones touched so dearly,” he said. “Come back to us in some years and in that moment, our friends, millions of us will be able to say thank you to each one of you personally, shake your hands and invite you to our homes.”

Servicemembers who attended the event expressed appreciation that Ghani came by the Pentagon to thank them.

“It was especially moving to have him thank personally some soldiers and others that sat in the front with their families,” Army Col. Arthur Kaff, who served in Afghanistan in 2011 at the height of the troop “surge,” told Stars and Stripes.

The speech was an emotional event for Navy Hospital Corpsman First Class Crystal Purnell, who served in Afghanistan in 2003 and 2004.

“It made me remember the guys that I lost and the guys that I was able to bring back home,” he said. “Getting a thank you from the president of Afghanistan, actually it touched me. I had some tears up there in front. So I’m proud to be here and hear him say that… And it makes me feel like what I did and what my guys went through was somewhat worth it.”

On Tuesday, Ghani is scheduled to visit Arlington National Cemetery to pay his respects to the veterans buried there.

Expressing gratitude to the U.S. military community isn’t the only reason Ghani is visiting Washington. He’s also here to meet with high-level officials to discuss the future of the U.S. military presence in Afghanistan.

The U.S. combat mission officially ended last year, but 10,000 troops remain in Afghanistan, where they are training, advising and assisting the Afghan National Security Forces, and conducting counterterrorism missions.

Last year, President Barack Obama laid out a timetable for withdrawal calling for the U.S. troop presence to drop to about 5,500 by the end of this year, and then shrink to an embassy presence by the end of 2016.

Following his meeting with Ghani at the White House on Tuesday, Obama is expected to announce that he will slow the pace of U.S. troop withdrawals and base closures in Afghanistan, as Ghani has requested.

Obama’s willingness to change the drawdown plan is due in large part to Ghani’s emergence as the leader of Afghanistan last fall, according to U.S. officials.

Ghani’s predecessor, Hamid Karzai, often criticized American actions and was wary of the foreign troop presence in his country, placing significant limits on coalition military activities. In contrast, Ghani has embraced military ties with the United States. Shortly after taking office in September he ended Karzai’s ban on night raids and signed a bilateral security agreement with the U.S. He also appointed his political rival, Abdullah Abdullah, to a high level position in his government as a symbol of national unity.

Pentagon officials have said that Ghani’s commitment to thanking American troops for their sacrifices are symbolic of the new relationship.