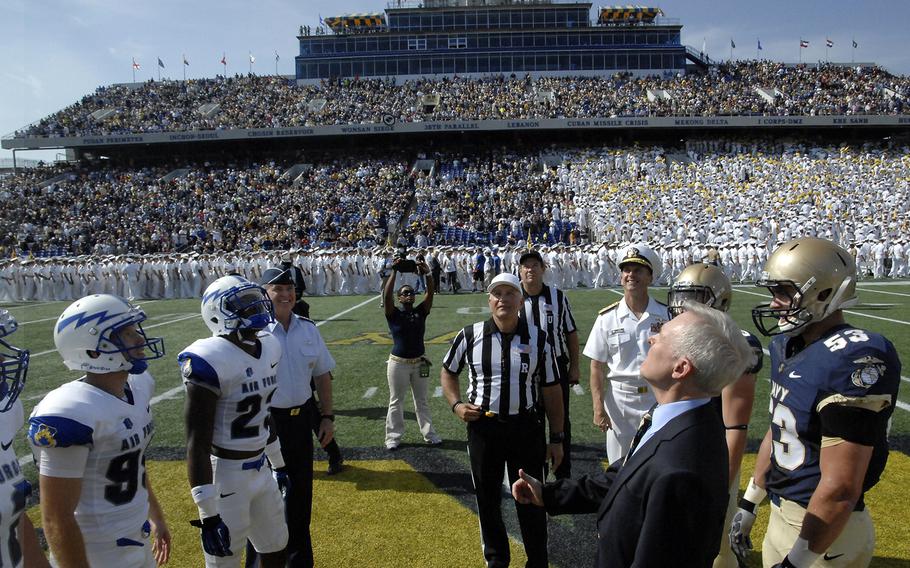 Buy Photo
All eyes are on the coin tossed by Secretary of the Navy Ray Mabus before the game between Air Force and Navy at Annapolis, Md. on October 5, 2013. (Joe Gromelski/Stars and Stripes)

The service academy football teams are preparing to play this weekend's scheduled games while still facing some uncertainty because of the partial government shutdown.

Navy athletic director Chet Gladchuk said Monday he and Naval Academy officials were providing more information to the Defense Department that shows the academy will not use government funds to play at Duke on Saturday.

"Today (Monday) I know that the Department of Defense is again reviewing addition information as it pertains to expenses and travel and no government spending. Hopefully we're gaining even more confidence in the fact that we're financially independent."

Gladchuk added, "No one has told us we can't play."

Air Force plays a home game against Mountain West Conference rival San Diego State on Thursday night. Army is at home against Eastern Michigan. Spokesmen for both academies said the teams are preparing to play.

Last week United Services Automobile Association, a Texas-based insurance and banking company that provides services to military members and their families, paid $230,000 to cover Air Force's travel from Colorado Springs to Annapolis, Md., so the Falcons could play Navy.

Air Force does not play another road game until Nov. 8 at New Mexico so travel expenses won't be an issue for a while. It's next two games are against Notre Dame and Army.

The Defense Department last week temporarily suspended sports competition at the service academies as a result of the budget impasse in Congress that led to the partial shutdown.

But the academies were all allowed to play their football games because no government funds were used.

Since that would be the case again this week for Navy, Gladchuk is hopeful it will be game-on.

"Duke has a clear understanding as of this moment that Navy will be heading south to Durham," he said.