A letter from home, red alert at Tan Son Nhut during Tet 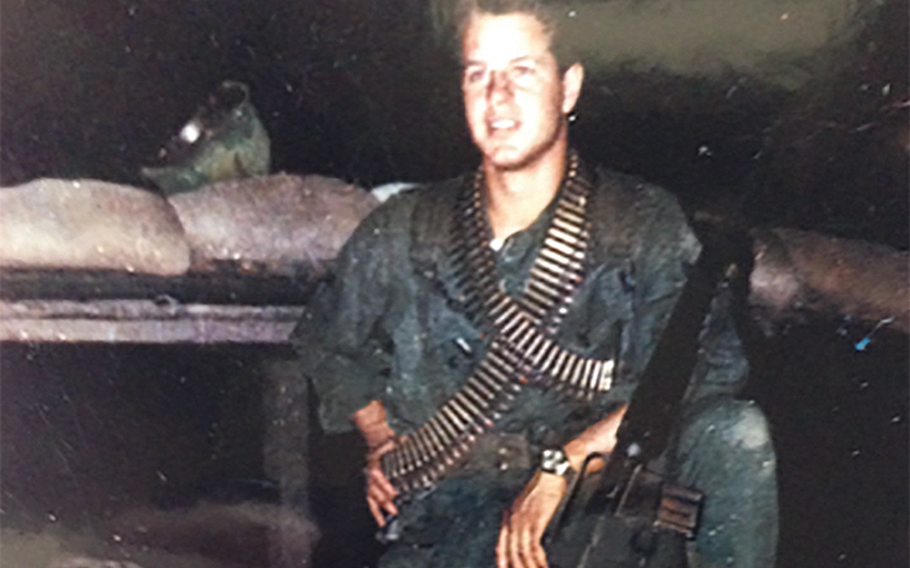 Army veteran Jim Markson served with the 377th Security Police Squadron at Tan Son Nhut Air Base in Saigon. He is co-author of “Vietnam & Beyond,” a collection of wartime letters he wrote to his mother from March 1967 to March 1968, along with his reflections added decades later after he discovered she had saved the letters. Jenny La Sala, his ex-wife, co-wrote the book.

This is his favorite story from the book, referencing the Tet Offensive and its aftermath.

I haven’t been able to write you lately and that’s because I’ve been working some pretty long hours here.

It looks like most of the trouble is over with, but Charlie is still out there and now the Army is hot on his tail. But they still don’t know just how many Viet Cong are out there.

The whole thing started at Tan Son Nhut Air Base on Tuesday, Jan. 30, when all of the Air Force bases in Vietnam were put on red alert. Red alert means that an attack is imminent. They had no intelligence reports at all that Tan Son Nhut was to be attacked, so everyone here was pretty calm.

We went to work at 7 a.m. that Tuesday and I didn’t get relieved until 10 a.m. Thursday. Charlie started his attack here at about 3:25 a.m. Wednesday morning. He started by firing at the fuel storage area at the northeast section of the base. This was a diversion, as at the same time a 727 World Airlines cargo plane was taking off. As it touched off and started to clear the west perimeter of the base, the sky turned red with tracer rounds fired at the 727.

This was the signal, and the stuff hit the fan all over the base. They sent missiles at the west side and mortared a gate there and started swarming in. They overran a machine gun bunker manned by five air police. They killed four out of the five men. The one they didn’t kill, they beat him up pretty bad.

After the second day, the air police had killed 109 Viet Cong on base. The Army and Air Force killed 400 on the other side of the perimeter. A few Army guys got killed too. But that’s a pretty good ratio in anybody’s book.

As for me, I didn’t kill any. I didn’t even get the chance to fire my weapon. The only trouble I had was a few snipers. They were in my area for three days. But I could never spot them when they would shoot at me.

The paper inside is a pamphlet the South Vietnamese dropped by air over the Viet Cong. It’s propaganda telling the VC how many have been killed and where, and that they don’t have a chance. I picked it up while we were making a sweep of where the VC had gotten on base. We didn’t find any VC, but we did find a few mines that they had planted on base.

That’s all for now. Send me some more clippings, will you? By the way, I received your salami today. Thanks.

P.S. There’s a whole bunch of weird things I could tell you about, but I’d have to write a book, and I’m tired.

Looking at the dates of the letters and the frequency I wrote home after the Tet Offensive, I’m a little amazed that I wrote as often as I did. The way I remember it, sleep was a very hard commodity to come by back during those days. It seemed like there was always something happening where the entire squadron would be called out and posted. My dates and times seem to be pretty accurate also. I can remember very well watching incoming machine gun fire that morning. I recall how whoever was firing wasn’t afraid of being spotted; this was my first inclination that maybe this was not a hit-and-run tactic.

Moments later my hunch became a reality as the cargo plane on takeoff roll lifted off at the west end of the airport. This was where the enemy had massed 4 battalions (2,000 men) to overrun the O-51 bunker. The sky lit up with tracer rounds aimed at the Boeing 727 — how they didn’t bring it down, God only knows.

I would bet the crew needed a change of underwear when they finally landed at their destination. As for me, like I said before, I did not go to West Point, but I knew for every tracer round being shot up in the sky, there was an enemy soldier on the ground with a rifle in his hands, and they were coming on base.

As I’m reading this letter — and keep in mind it’s written to my mother—I’m puzzled by the “I didn’t kill any. I didn’t even get a chance to fire my weapon.” We’re talking about people here, killing human beings, and I’m being apologetic. Like “Sorry Mom, maybe I’ll get a chance to kill some people another day.”

What’s wrong with this picture? Yet that was the mindset of the time. That’s what you do in a war, isn’t it? And during those chaotic moments that accompanied the assault, there were two episodes when I thought I was going to find out what it was like to kill a person or be killed trying to do so.

A sniper found his way on top of the roof of a two-story aircraft maintenance hangar not far from my bunker. It was during a lull, eerily quiet, when all of a sudden he let loose on full automatic and started spraying bullets at the aircraft parked on the flight line. He was to my 9 o’clock position and less than 100 yards away. I considered it an easy shot.

Without any thought, I left the bunker and set my M-16 sights for the roof, finger on the trigger, waiting for the illuminating flares to do their job. No sniper. He never fired another shot, and I never heard anything more about it.

One of the posts in my sector got on the radio, saying, “They’re headed for the F-4 (phantom fighter plane) parking area” The only thing between the post who made the call and the F-4 parking area was me, this time to the 5 o’clock position.

I had a wide open field of fire, all taxiway! It seemed like it took an eternity for the flares as they oscillated, causing moments of artificial daylight followed by seemingly neverending darkness.

This time my finger was on the trigger of an M-60 machine gun. And each time the sky lit up, I expected to see swarms of Viet Cong headed my way. I waited and waited, with an intensity and focus that I never knew before or since. Again, there was no enemy. I never heard another thing about it.

Although the base was declared secure Wednesday morning around noon, it wasn’t until Thursday that they figured out what was going on and could get people relieved. Indeed, there were snipers in and around the base. One of my biggest fears was when answering the calls of nature. I was dreadfully afraid that I would be shot when I had to leave the safety of the bunker to relieve myself. Nighttime was not any better because “spooky” was dropping flares all night long, continuously illuminating the base. All I asked was that if I was going to be taken out, please not with my pants down.

Part of being a Vietnam veteran — and the reception, humiliation and disdain we received when we arrived stateside — was the widely held belief that we were all drug- and alcohol-infused crazies. I’m sick of it.

Were we saints? No, far from it. When I was not on duty, did I abuse alcohol? You better believe it. Were marijuana, heroin and opium readily available within sight of the main gate at Tan Son Nhut? You can bet your life it was. Did some soldiers fall victim to what I call heavy drug use and bring it home with them? Unfortunately they did, but it was far from the norm.

But believe me when I say this: On the eve of the Tet Offensive and during the onslaught that followed, the only substance in our veins was adrenaline, heavily laced with a sense of duty and honor. The overabundant drug and alcohol use is a stigma that has followed us to the present day, and I would venture a guess that I’m not the only one who feels this way.

I’m amused reading my last line in the letter: “I’d have to write a book.”

Some things take 47 years to get done.