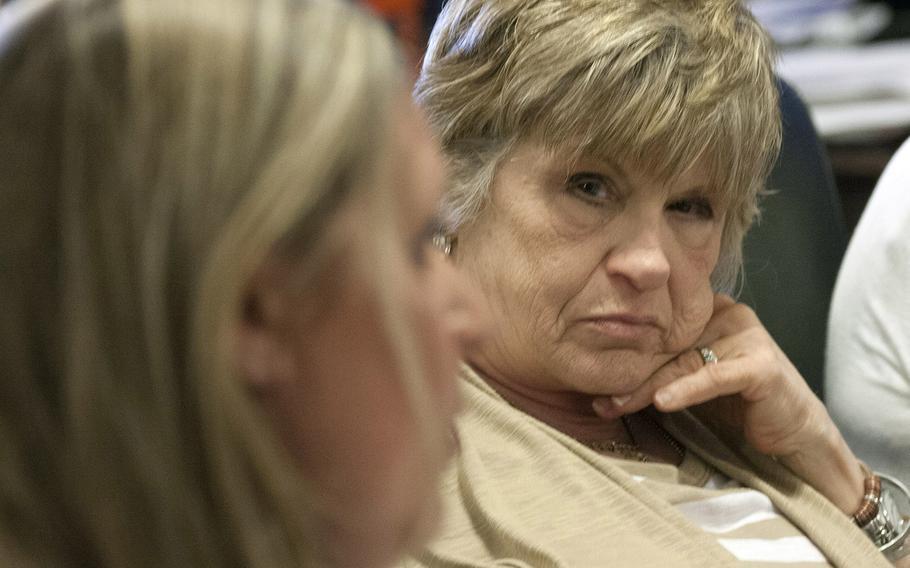 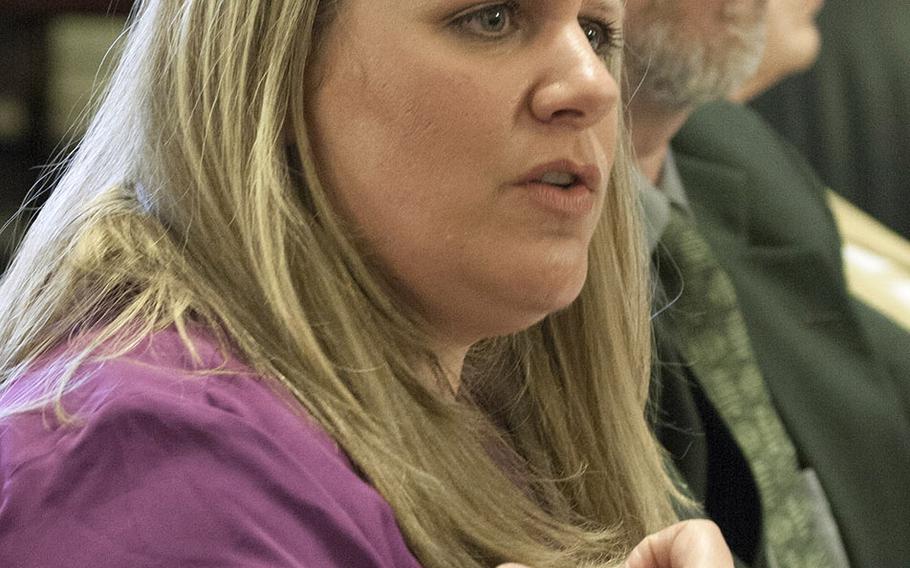 Buy Photo
Whistleblower Kristen Ruell testifies during a House Committee on Veterans Affairs hearing on problems at VA facilities in Philadelphia and Oakland, Calif. on April 22, 2015. Behind her is Joseph Malizia, president of Local 940, American Federation of Government Employees. (Joe Gromelski/Stars and Stripes) Buy Photo
Rep. Jeff Miller, R-Fla., chairman of the House Committee on Veterans Affairs, listens to testimony during a hearing on problems at VA facilities in Philadelphia and Oakland, Calif. on April 22, 2015. (Joe Gromelski/Stars and Stripes) 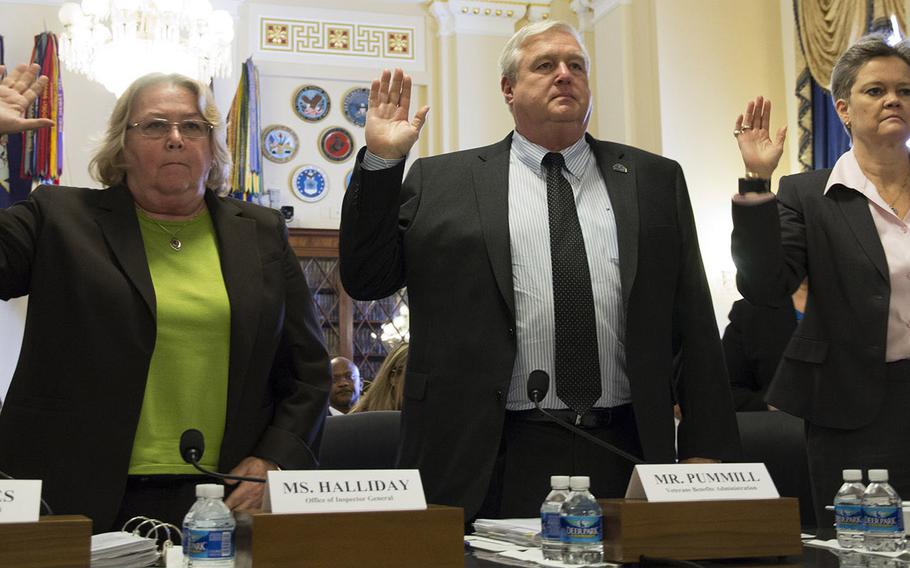 Buy Photo
Linda Halliday, Assistant VA Inspector General for Audits and Evaluations; Danny G. I. Pummill, principal deputy under secretary for benefits of the Veterans Benefits Administration; and Diana Rubens, Director of the VA's Philadelphia Regional Office are sworn in during Wednesday's House Committee on Veterans Affairs hearing on problems at VA facilities in Philadelphia and Oakland, Calif. (Joe Gromelski/Stars and Stripes) 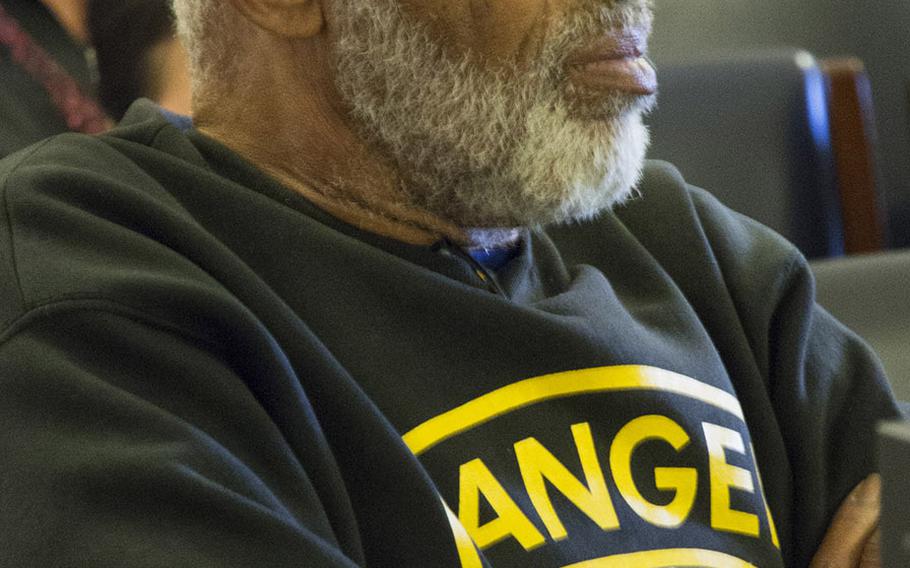 WASHINGTON — In an emotional hearing, whistleblowers described psychological abuse and wrongdoing that they say is ongoing at two VA regional offices, long after the Department of Veterans Affairs became aware of issues, and a government watchdog said it is investigating a controversial payment to the new director of one of the offices.

Despite VA claims that the situation is improving in the midst of a yearlong national health care scandal, malfeasance at the Philadelphia and Oakland regional offices continues, according to whistleblowers testifying Wednesday in front of the House Committee on Veterans Affairs.

“Without removing the officials making the bad decisions, this issue will continue to be a revolving door of taxpayer waste,” said Kristen Ruell, an authorization quality review specialist at the Philadelphia VA Regional Office.

The hearing came on the heels of a VA Office of Inspector General report that detailed a range of problems in Philadelphia, from failure to process thousands of pieces of mail to unsafe working conditions.

In one case, investigators found that 31,000 inquiries went unanswered for an average of 312 days even though staff is supposed to respond to each within five days. Investigators also found 48 boxes of mail with 16,600 of documents that were supposed to have been scanned into the VA’s virtual database, potentially affecting veterans’ benefits.

There’s also growing concern over $288,000 in taxpayer money paid to new Philadelphia director Diana Rubens for her move from Washington, D.C., to Philadelphia.

“Based on the IG’s reports describing the serious problems processing claims in both Philadelphia and Oakland, I think that the phrase ‘systemic failures and mismanagement’ might be a gross understatement,” Committee Chairman Rep. Jeff Miller, R-Florida, said at the hearing.

The VA scandal cost former VA Secretary Eric Shinseki his job, and continues to dog the agency as fresh stories of wrongdoing and incompetence surface. A large part of that problem has been retaliation against employees who report the problems.

VA officials, though, say the problems in Philadelphia are isolated.

“I don’t look at this as a systemic problem at all,” said Allison Hickey, the VA’s undersecretary for benefits, told the Associated Press. “While we may have some records management problems, some misinterpretation of guidance and may even have an individual or two do things they shouldn’t have done, it’s not a reflection of the tremendous work of the VA.”

A whistleblower from the Oakland VA Regional Office in California, which gained notoriety when more than 13,000 ignored claims were discovered, also testified at Wednesday’s hearing. Rustyann Brown says claims of elderly and terminally ill veterans were ignored and that many veterans had died by the time employees addressed their claims. She said sensitive cases of military sexual trauma were not treated in accordance with rules. As a survivor of military sexual trauma during her time in the Navy, Brown’s own post-traumatic stress was retriggered by reading the claims. But when she formally requested an exemption from working on such claims, it was denied.

“I would spend time in the restroom crying or hiding in a stairwell so I could be alone and not have anyone see the physical reaction I would have to these claims,” she said, her voice quivering.

“After months of being referred to as ‘snitch’ or ‘narc’ by other employees and being isolated with my department, I put in for early retirement,” Brown said.

Diana Blender, a 73-year-old employee at the Philadelphia office, said colleagues and managers singled out older employees for abuse, including making a point of sending them the hardest claims cases and dropping large boxes behind her to scare her. She said the mistreatment worsened when she started reported wrongdoing, such as mail manipulation.

“Sadly for me, when I unearthed the true happenings of this department and their gross unjust manipulations of others, I was sent on a journey of daily abuse, mental cruelty, emotional torture and undeserved corrective job actions,” she told the committee.

VA officials originally said the Inspector General’s report on the Philadelphia office detailed year-old problems that have been fixed and pointed to new leadership at the Philadelphia regional office. Later, they acknowledged there are ongoing problems.

Philadelphia employees said problems at their regional office are ongoing and were skeptical of the efforts of the new director.

Joseph Malizia, a Philadelphia employee and the president of the local union branch that represents many of the workers there, said Rubens has done nothing to change the culture.

“Her actions once again are indicative of a deny, cover up and repeat management philosophy,” he said.

VA Assistant Inspector General for Audits and Evaluation Linda Halliday told lawmakers that the IG is investigating the appropriateness of Rubens relocation compensation as well as the conduct of two Philadelphia regional office leaders.

“While VA took actions to fix problems in the VA (regional office), we recently received additional information that some of the problems identified in this report continue to negatively impact some areas of claims processing performance,” she said.

During intense questioning at the hearing, Rubins defended her record and her relocation compensation.

“Since my arrival in Philadelphia, I have been very actively engaged in understanding the challenges ... reaching out to employees and our stakeholders, the veterans,” she said.