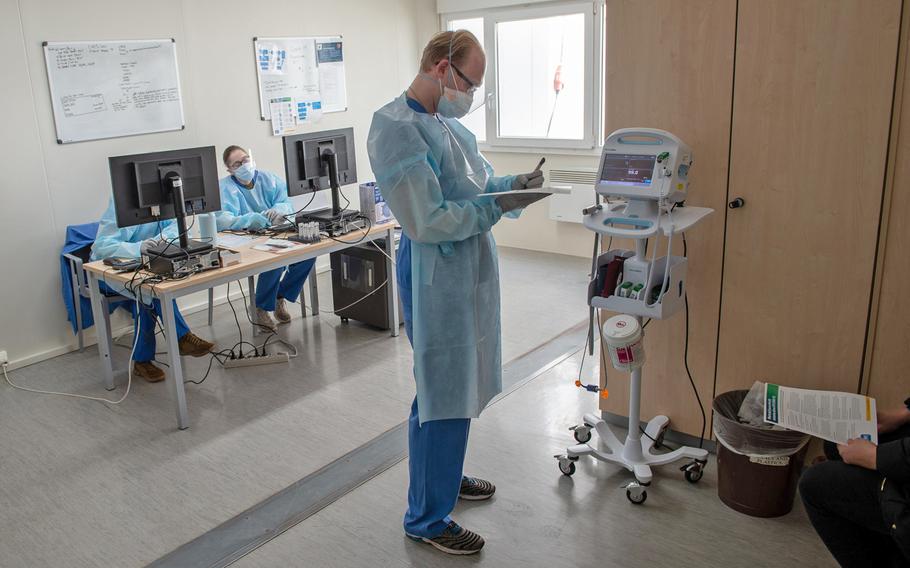 Buy Photo
Medical technician Spc. Thomas Ashworth watches a monitor as a patient is screened for coronavirus at Landstuhl Regional Medical Center in Germany, in March 2020. Most of the small number of active-duty soldiers who are seriously sickened with COVID-19 had underlying medical conditions such as obesity and high blood pressure, a study has found. (Brian Ferguson/Stars and Stripes) 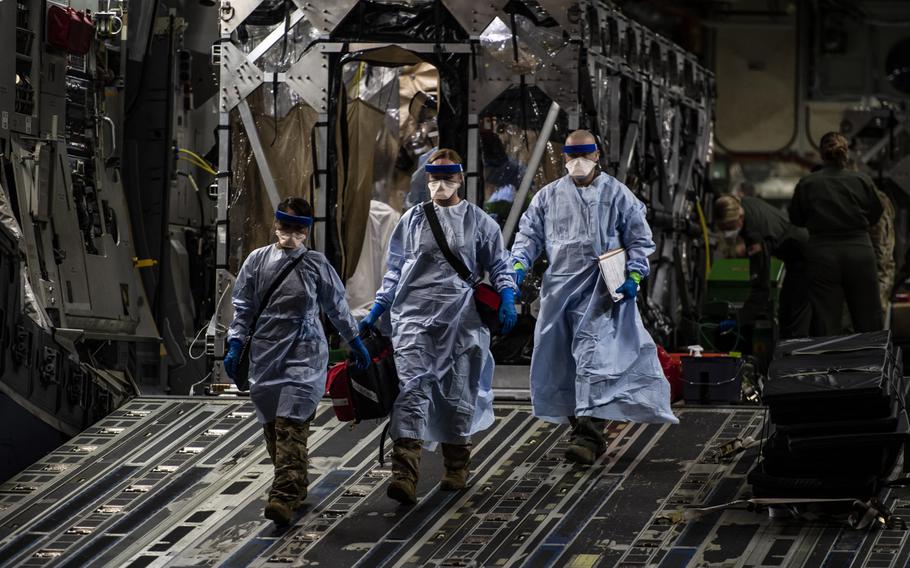 Three medical airmen exit a C-17 Globemaster III aircraft at Ramstein Air Base, Germany, April 10, 2020, following the first-ever operational use of the Transport Isolation System. A new study of active-duty members diagnosed with the coronavirus found that most had mild illness with no complications. (Devin Nothstine/U.S. Air Force)

Most of the small number of active-duty soldiers who became seriously ill after contracting the coronavirus had underlying health conditions such as obesity and high blood pressure, the first study to look at that group of service members has found.

The findings, which mirror what has been found among civilians, were “kind of a relief,” said Dr. John Ambrose, a senior epidemiologist with the Army Public Health Center.

“It tells us there’s no factor that’s changing outcomes in the military population. And so we know we can effect public health mitigation measures and interventions” that have been proven to work, he said, such as social distancing, mask-wearing and good hygiene.

More than 200 active-duty soldiers who were diagnosed with the coronavirus between Feb. 11 and April 6 took part in the study, the results of which were published in the current issue of the military’s Medical Surveillance Monthly Report.

Only 12 of the 219 soldiers in the study — just over 5% — were hospitalized, and of those, four were treated in intensive care units. None required a ventilator and none died. No active-duty soldiers had died of the disease as of June 21, Ambrose said.

In the general U.S. population, 14% of people who became ill with the coronavirus required hospitalization, 2% were admitted to an ICU, and 5% died, data gathered through the end of May and published last week by the Centers for Disease Control and Prevention show.

The lower rate of infection and death from coronavirus in the active-duty population likely has to do mainly with youth and “the healthy soldier effect,” Ambrose said. Active-duty troops are younger than the general population and tend to be fitter than civilians of similar age.

But a quarter of the 12 soldiers who had to be hospitalized had high blood pressure, nearly 60% were obese and half had a neurological disorder such as migraines or traumatic brain injury.

Of the eight soldiers who were hospitalized but not admitted to an ICU, two had three or more underlying conditions and three had none at all, it said.

All but one of the hospitalized soldiers were men, six were between 35 and 44 years old, four were at least 45 and two were under 25, the study said.

Similar results could be expected in larger studies, said Ambrose, warning young, healthy troops not to become cavalier about the virus.

“I think you should definitely take public health precautions,” he said. “You do put yourself at risk for severe outcomes and you can still put those you care about at risk.”

Despite findings about advanced age and underlying conditions making people more vulnerable to severe illness, there’s still much that remains unknown about the coronavirus, he said.