Patrick Gavin Tadina is pictured here in an undated photo wearing North Vietnamese Army fatigues and carrying an AK-47, as he often did as a long range reconnaissance patrol team leader over five years straight serving in Vietnam during the war. One of the most-decorated enlisted soldiers of the Vietnam War, Tadina retired as a command sergeant major in 1992. He died Friday, May 29, 2020, at age 77. (Catherine Poeschl) 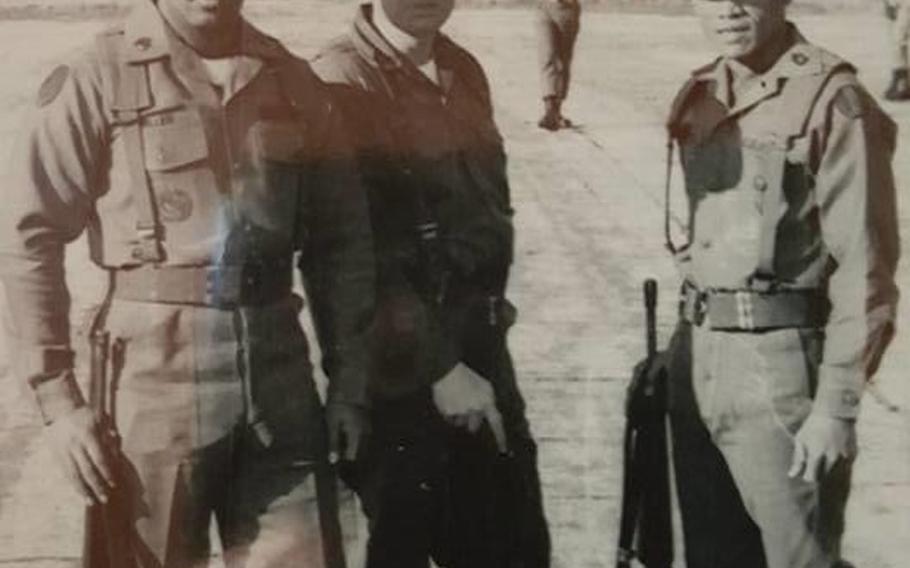 This undated family photo shows Patrick Gavin Tadina, far right, during his time as a drill sergeant at Fort Jackson, S.C., in the late 1970s. Tadina, a retired command sergeant major and one of the most-decorated enlisted soldiers of the Vietnam War, died Friday, May 29, 2020. (Catherine Poeschl) 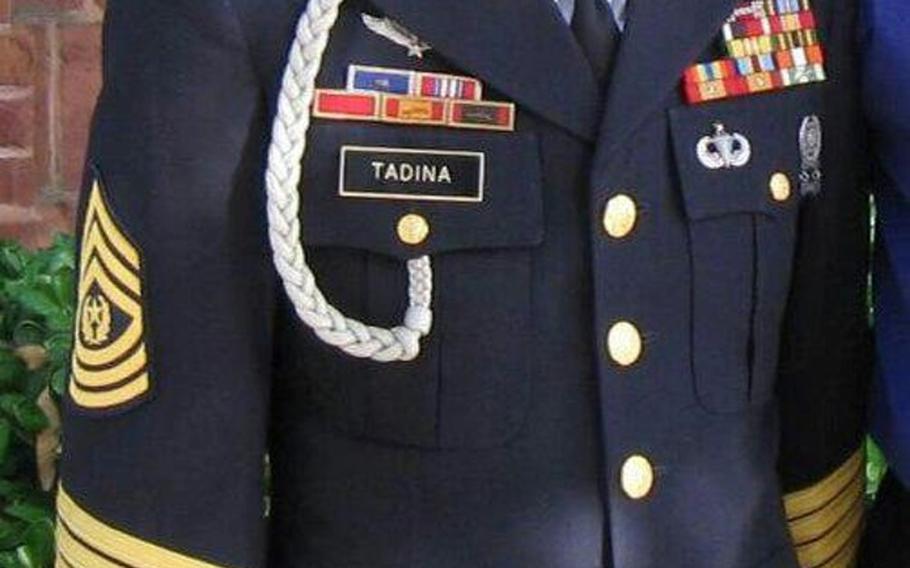 Retired Command Sgt. Maj. Patrick Gavin Tadina is pictured in an undated family photo his daughter said was taken sometime after about 2015. Tadina, one of the most-decorated enlisted soldiers of the Vietnam War, died Friday, May 29, 2020, at the age of 77. (Catherine Poeschl)

A 30-year Army veteran who was the longest continuously serving Ranger in Vietnam and one of the war’s most decorated enlisted soldiers has died.

Patrick Gavin Tadina served in Vietnam for over five years straight between 1965 and 1970, leading long range reconnaissance patrols deep into enemy territory — often dressed in black pajamas and sandals, and carrying an AK-47.

The retired command sergeant major died Friday morning in North Carolina. He was 77.

“Early this morning my Dad ... took his last breaths and went to be with all the Rangers before him,” his daughter Catherine Poeschl said on Facebook. “I know they are all there waiting for him.”

He is survived by his wife, two sisters, two daughters, four sons, six grandchildren and two great-grandchildren, the family said in a brief online obituary. A funeral had not yet been scheduled.

After the release of the second Rambo movie, he was profiled in Stars and Stripes, where he was contrasted with Sylvester Stallone’s beefy — often shirtless — portrayal of a Vietnam combat veteran.

“The real thing comes in a smaller, less glossy package,” wrote reporter Don Tate in December 1985. “Tadina stands just over 5-feet-5, and swells all the way up to 130 pounds after a big meal.”

His small stature and dark complexion helped him pass for a Viet Cong soldier on patrols deep into the Central Highlands, during which he preferred to be in the point position. His citations describe him walking to within feet of enemies he knew to be lying in wait for him and leading a pursuing enemy patrol into an ambush set by his team.

Tadina joined the Army in 1962 and served in the Dominican Republic before going to Southeast Asia. He also served with the 82nd Airborne Division in Grenada during Operation Urgent Fury in 1983 and with the 1st Infantry Division during Operation Desert Storm in 1991.

A 1995 inductee into the Ranger Hall of Fame, he served with “extreme valor,” never losing a man during his years as a team leader in Vietnam, a hall of fame profile at Fort Benning said.

Some 200 men had served under him without “so much as a scratch,” said a newspaper clipping his daughter shared, published while Tadina was serving at Landing Zone English in Vietnam’s Binh Dinh province, likely in 1969.

Tadina himself was shot three times and his only brother was also killed in combat in Vietnam, Stars and Stripes later reported.

The last time he was shot was during an enemy ambush in which he earned his second Silver Star, and the wounds nearly forced him to be evacuated from the country, the LZ English story said.

As the point man, Tadina was already inside the kill zone when he sensed something was wrong, but the enemy did not fire on him, apparently confused about who he was, the article stated. After spotting the enemy, Tadina opened fire and called out the ambush to his teammates before falling to the ground and being shot in both calves.

He refused medical aid and continued to command until the enemy retreated, stated another clipping, quoting from his Silver Star citation.

“When you’re out there in the deep stuff, there’s an unspoken understanding,” he told Tate in 1985. “It’s caring about troops.”

He was not one to boast of his experiences, his daughter said in a phone interview Monday.

After retiring from the Army in 1992, he continued working security jobs until 2013, Poeschl said, including stints in Iraq, Afghanistan and Pakistan.

In recent years, he’d been struggling with dementia and other ailments, she said, and he often believed he was back in the Army with his buddies.

He always seemed most at home with his “Ranger family,” his daughter said. She was trying to get word of his death to as many as she could.

“He was my dad, but he belonged to so many other people,” she said.