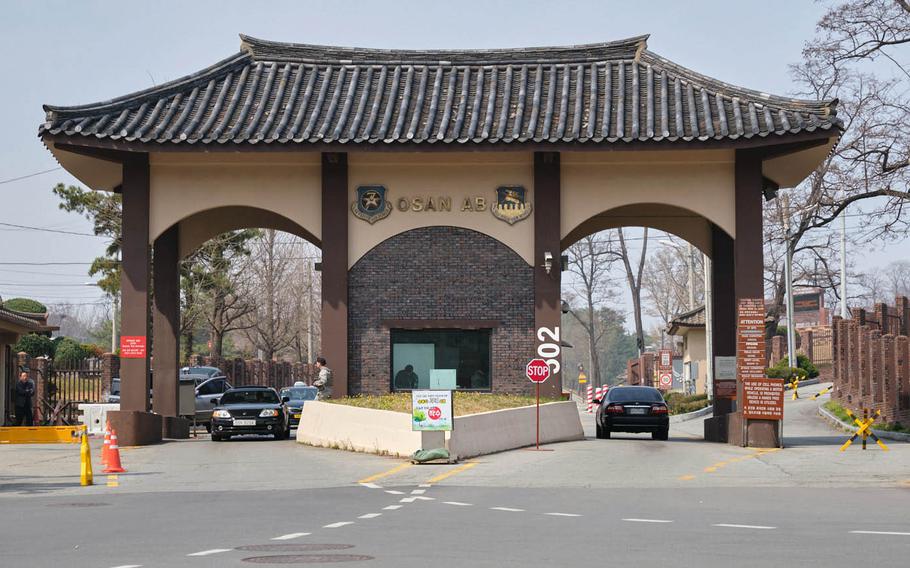 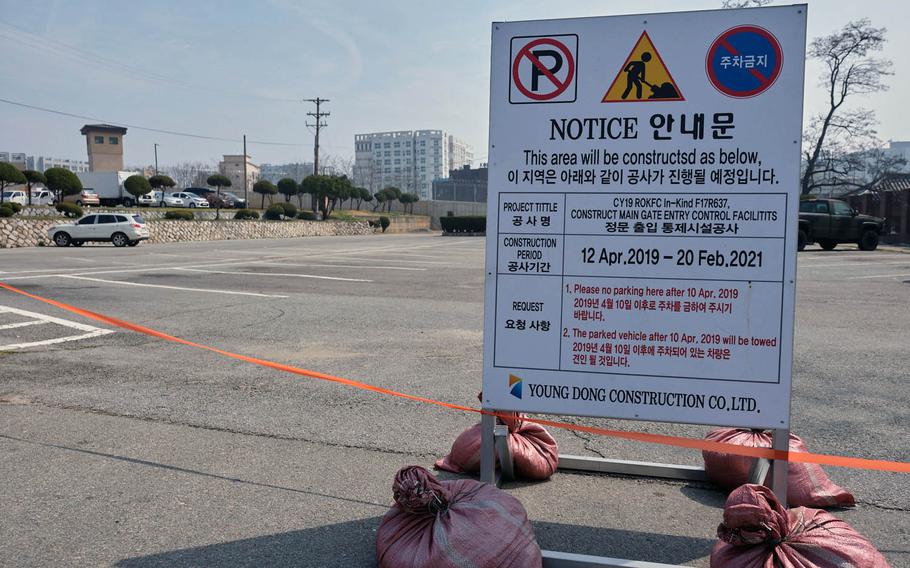 Buy Photo
A sign and orange tape alert drivers to coming renovations at the main gate at Osan Air Base, South Korea, on Thursday, April 11, 2019. (Matt Keeler/Stars and Stripes) 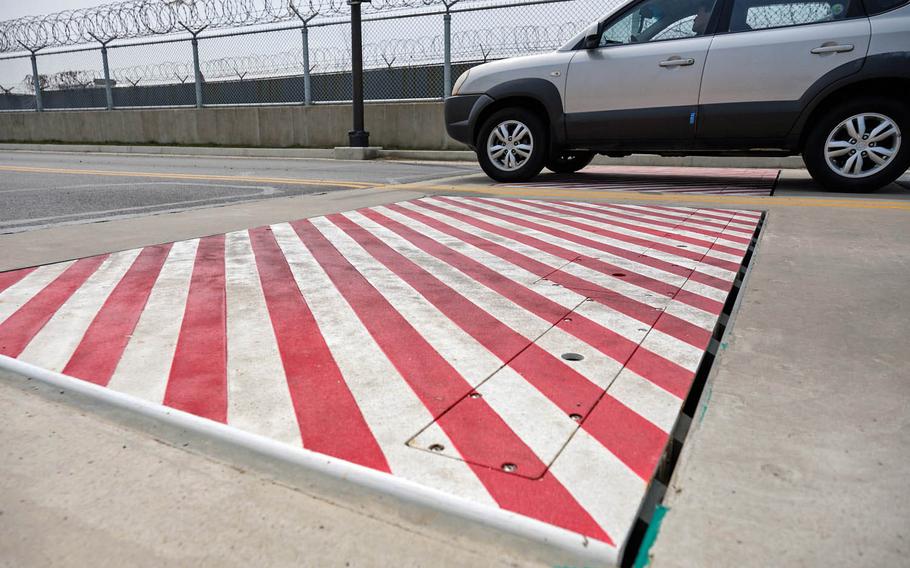 Buy Photo
The same type of barrier seen here at the Morin Gate, Osan Air Base, South Korea, on Thursday, April 11, 2019, will be installed at the base main gate. (Matt Keeler/Stars and Stripes)

OSAN AIR BASE, South Korea — Years of planning has paid off for the 51st Civil Engineer Squadron, which designed and advocated for funding the complete overhaul of the installation’s main gate that begins Friday.

The two-year project by Korean contractors will bring the main access control point, constructed over three decades ago, up to standards for anti-terrorism force protection implemented after 9/11.

“The way it is set up now is just not hitting the mark,” said Lt. Col. Timothy Fryar, commander of the 51st Civil Engineers. “The gate is too close to the perimeter, so our defenders don’t have enough time to determine if someone is trying to run the gate or not.”

An ideal control point setup consists of serpentine entry roads that force drivers to slow down to an acceptable speed, and a deployable barrier system that prevents potential threats from reaching the base perimeter.

The current control point already puts visitors inside the perimeter before they’re screened by security forces. Should the driver attempt to bypass the control point, a manned, up-armored Humvee is signaled to block access and quickly increase the security response.

“Coming on base, for security forces to be able to defend us, there is just no time,” Fryar said. “Once a defender determines someone is attempting to run the gate, they are on the installation already.”

Less than 100 yards beyond the gate is the new Osan Elementary School, where hundreds of children and educators spend their days, and a possible point of interest in the event a gate runner does make it beyond current security measures.

At a price tag of nearly $11.3 million, the 21st-century access control point will provide the protection essential to roughly 11,000 servicemembers, families, and civilians that work and live on base, Fryar said.

The new gate will include serpentine roads, guard towers, a deployable barrier system, three lanes of inbound traffic, two lanes for outbound, a visitors’ center, a separate vehicle inspection area and a new pedestrian entrance over twice the size of the current facility.

All this may sound great from a security perspective, but it can’t be so simple.

The renovation is going to eliminate substantial parking on the north and south sides of the current layout.

“We already have a big enough parking issue on this base as it is,” said Hope Borseth, a military spouse residing in Osan base housing. “Taking out more parking isn’t helping the situation.”

Base residents typically drive to the main gate, park at those lots, and walk to the shopping district just outside the gate.

The construction is broken down into three phases. During phases one and two, the first 17 months, the gate will retain normal operations allowing both vehicles and pedestrians to enter. During the last seven months, phase three will only allow pedestrians to enter the installation. Morin Gate has been recommended as an alternative.

Fryar said for the servicemembers and families that will be here for the construction, this is going to be a change. Near the end, however, new arrivals will accept the new entry way as just the way it is.