Sheriff: Marine veteran killed 12 in California nightclub before killing self 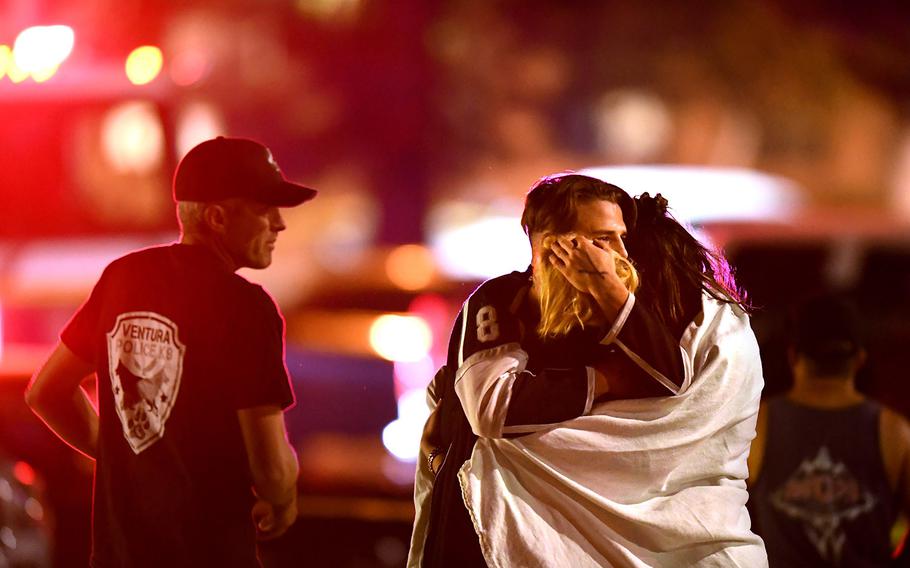 People comfort each other after a mass shooting at the Borderline Bar & Grill in Thousand Oaks, Calif., late Wednesday night, Nov. 7, 2018. The shooter has been identified as a 28-year-old Marine Corps veteran who apparently killed himself after killing a dozen people. (Wally Skalij/Los Angeles Times/TNS) 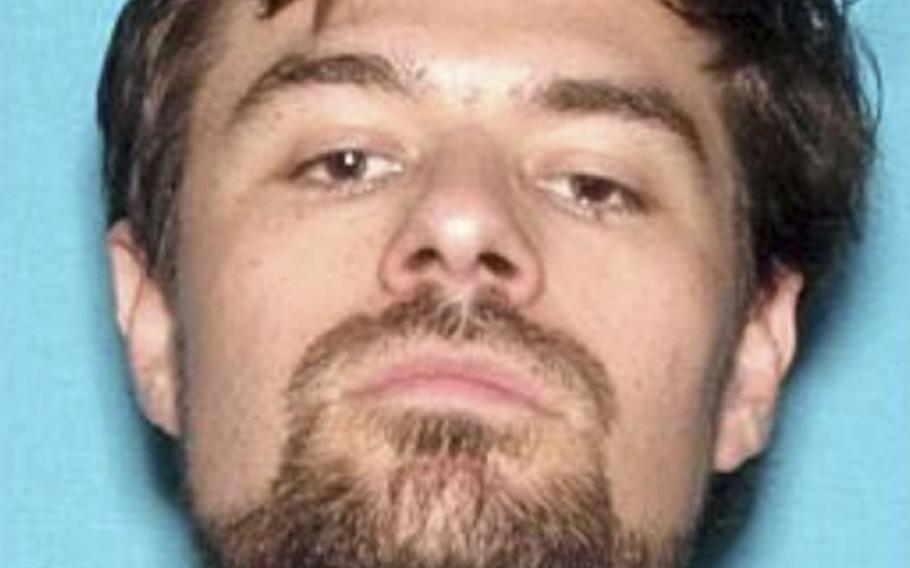 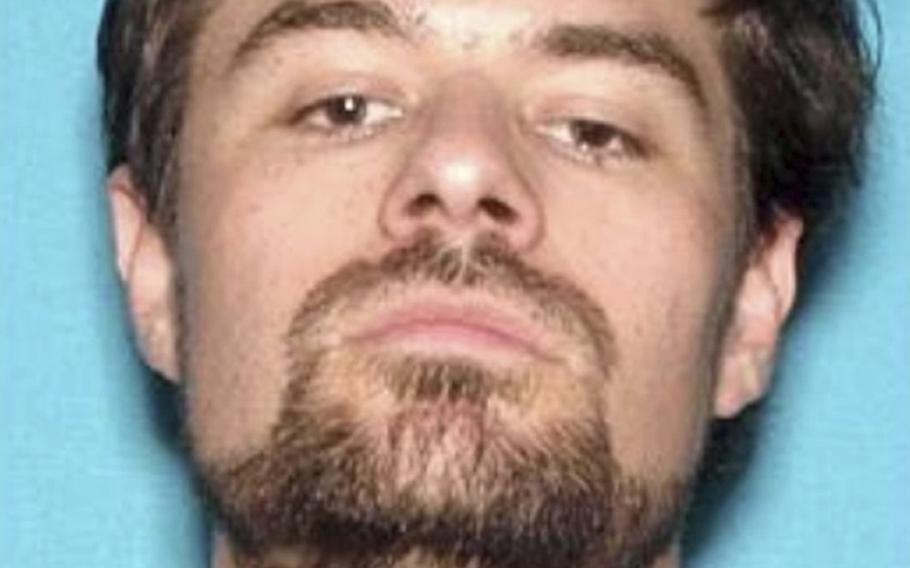 WASHINGTON — A 28-year-old Marine veteran who had served in Afghanistan as a machine gunner is suspected of killing 12 people and himself late Wednesday at a Los Angeles-area nightclub, police and military officials said Thursday.

Ventura County Sheriff Geoff Dean told reporters that law enforcement officials had not determined why Ian David Long carried out the mass shooting at the Borderline Bar and Grill, a country-themed nightclub, in Thousand Oaks.

Long served in the Marine Corps from August 2008 to March 2013, attaining the rank of corporal, according to his service records. He was a machine gunner who served a deployment to Afghanistan from November 2010 through June 2011, his records show.

He had most recently served with 2nd Battalion, 3rd Marine Regiment at Kaneohe Bay, Hawaii.

“The Marine Corps extends its deepest condolences to the families of the victims in this senseless tragedy,” Capt. Joseph Butterfield, a Marine spokesman, said in a statement.

Long received two administrative disciplinary actions while in the Marines for shoplifting at a store on an unidentified military base some time before his deployment to Afghanistan in 2010, according to the Los Angeles Times. Despite the infractions, Long eventually received an honorable discharge in 2013 and was also awarded a handful of standard military commendations during his time in the Marines, including a Combat Action Ribbon.

After leaving the Marines, Long had a few “minor” run-ins with local police, Dean said, including a traffic ticket and an April incident in which deputies responded after he was reported to be acting “irate and irrationally” at the home he shared with his mother, Colleen, in the nearby suburb of Newbury Park.

He was not arrested as a result of that incident, Dean said, but mental health experts who responded determined he “might be suffering from” post-traumatic stress disorder. The sheriff did not provide evidence Long had been diagnosed with PTSD nor did he say whether investigators suspected Long was suffering Wednesday from PTSD symptoms.

“We have no idea what the motive was at this point,” Dean said Thursday.

Little additional information about Long’s life both before and after he left the Marine Corps was available Thursday.

An obituary in the Santa Ana Orange County Register said Long's father, David Bruce Long, died in 1999 of liver failure. Orange County court records obtained by the Los Angeles Times indicated Long’s parents divorced in 1991, when he was an infant.

In 2006, Long and his mother moved into their Newbury Park home, according to property records obtained by the Washington Post.

According to The Associated Press, court records indicate Long was married while living in Honolulu in June 2009, but that the relationship had deteriorated during his deployment to Afghanistan in June 2011. Long and his wife, who has not been identified, cited irreconcilable differences in divorce papers filed May 2013 — two months after he left the Marines.

Long's cousin AJ Schramm told CBS News that Long's deployments changed him, and that he also became distant from family upon leaving the service. Schramm also said Long's mother recently complained about issues she was having at home with her son — leading some relatives to wonder if Long suffered from PTSD.

Officials at California State University, Northridge confirmed Long had attended the school, which is just northwest of Los Angeles.

In a statement, officials said he had last attended the university in 2016.

Blake Winnett, 35, who knew Long as a roommate several years ago, said he initially thought Long might have been a victim in the shooting. But when he called a former mutual friend to share the news, that person suggested Long might be the shooter.

“I was shocked,” Winnett told Stars and Stripes on Thursday. “That’s not something you hear of every day and I don’t know people like that.”

He said he first learned of Long’s connection to the incident after receiving a call from a news outlet.

Winnett said he and Long shared an apartment for about six months in 2012.

“He was younger, he was still kind of a party animal,” Winnett recalled. “He was always bringing his military buddies over and drinking.”

Winnett moved out and two years later was living in the same area with a new roommate who knew Long. That roommate told Winnett that Long would be moving in and they lived together for about a year.

“He was very quiet, he kept to himself and always had his earbuds in,” Winnett remembered. “He would go in the garage and practice [Electronic Dance Music] moves. It was weird.”

Winnett said Long would talk about his time in the Marines occasionally, but otherwise he “wouldn’t talk much about anything.”

AP spoke to several of Long's neighbors who described the young man as an introvert prone to aggressive outbursts.

In 2017, an internet user identifying himself as “Ian” posted on ShadowSpear, an online community for special-operations forces, about life in college after the military. The Washington Post, which discovered the postings written under the pseudonym “Doorkicker03,” noted that the user’s service records aligned with Long’s.

"I am graduating with a B.S. in Athletic Training in two months," the user wrote. "I found out a little too late that just wasn't the job for me.”

The individual explained that he hoped to become an Army Ranger, claiming his prior military service would make it easier “to get into the regiment rather than going to the dark side.”

Witnesses to the shooting, speaking to media organizations, said the perpetrator appeared to know what he was doing. Long wore all black and used some kind of smoke device to conceal his movement, they told local news outlets.

“He shot quick,” Tim Dominguez, a Borderline regular who was in the bar Wednesday evening, told the Los Angeles Times. “He was good at it, like he knew what he was doing.”

Dean said Long used a Glock 21 .45 caliber handgun in the shooting, which was purchased legally. The sheriff said the firearm, which typically holds 11 rounds, had an extended capacity magazine.

“It appears he walked up to the scene, he shot the security guard [who] was standing outside, he stepped inside, it appears that he turned to the right and shot several other security and employees there and then began opening fire inside the nightclub,” Dean said.

In addition to the 12 killed, more than 20 were injured. Long shot himself in the nightclub, sheriff said.

Among the people killed was Sheriff's Sgt. Ron Helus, a 29-year veteran of the Ventura County Sheriff’s Department who was responding to the shooting call, Dean said.

Helus and another officer were the first to arrive at the scene, just minutes after the 911 call came in about 11:20 p.m. local time. Dean said Helus was shot multiple times and died Thursday morning at a local hospital.

"Ron was a hardworking, dedicated sheriff's sergeant who was totally committed," Dean said of the sergeant who was close to retiring. "And tonight, as I told his wife, he died a hero because he went in to save lives."

Several other victims, including a Navy veteran and Marine Corps veteran, were publicly identified Thursday, as law enforcement officials said the next-of-kin notification process was underway.