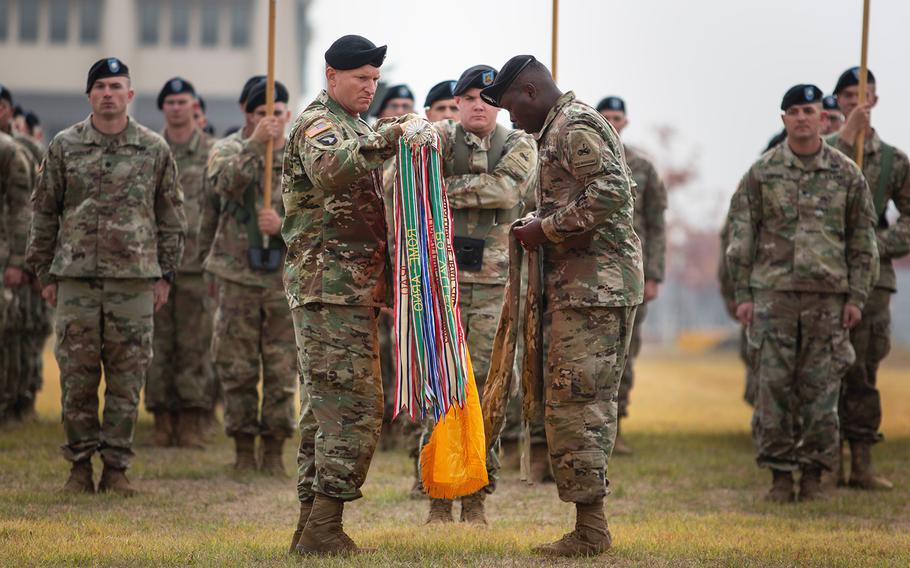 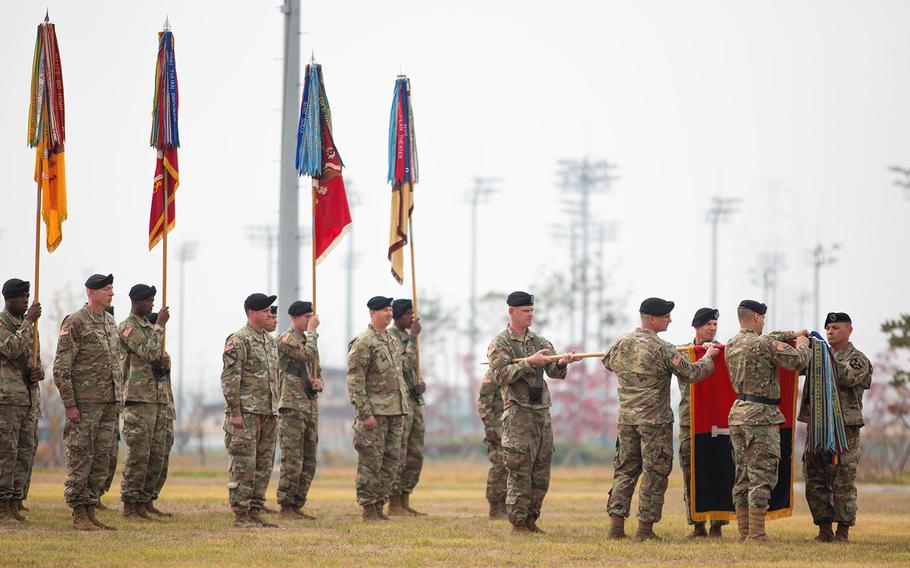 Buy Photo
U.S. soldiers take part in a transfer of authority ceremony at Camp Humphreys, South Korea, on Oct. 22, 2018. According to reports on Jan. 12, 2019, U.S. negotiators are asking Seoul to pay roughly 50 percent more towards the cost of hosting U.S. troops on the Korean peninsula. (Marcus Fichtl/Stars and Stripes) 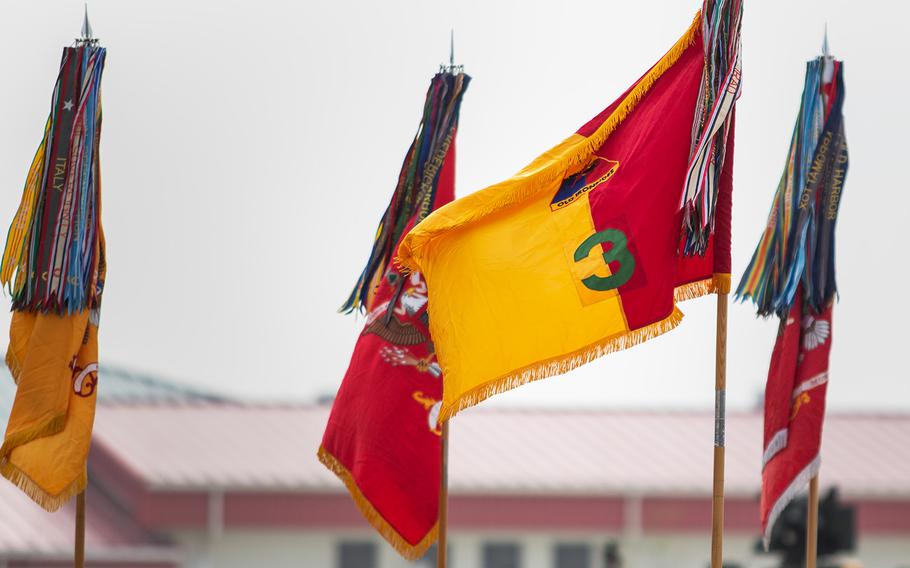 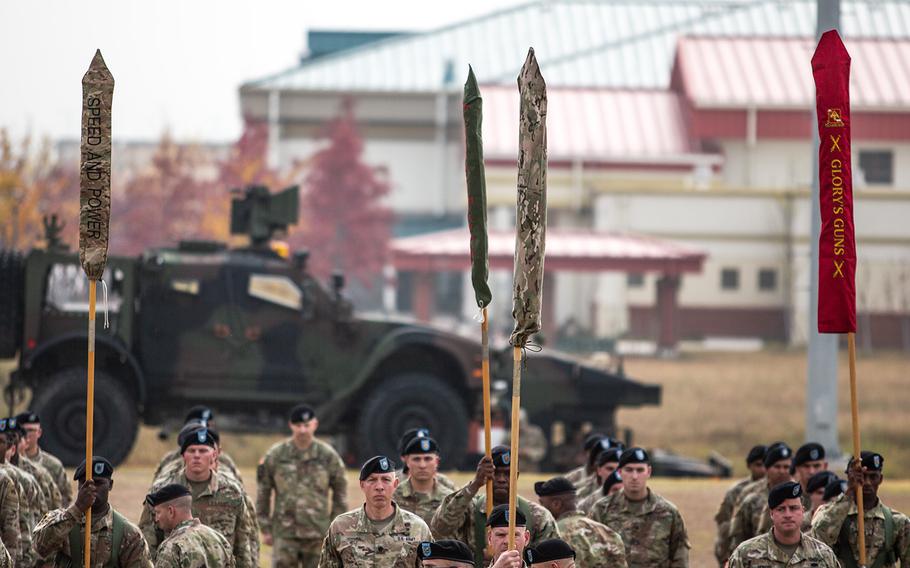 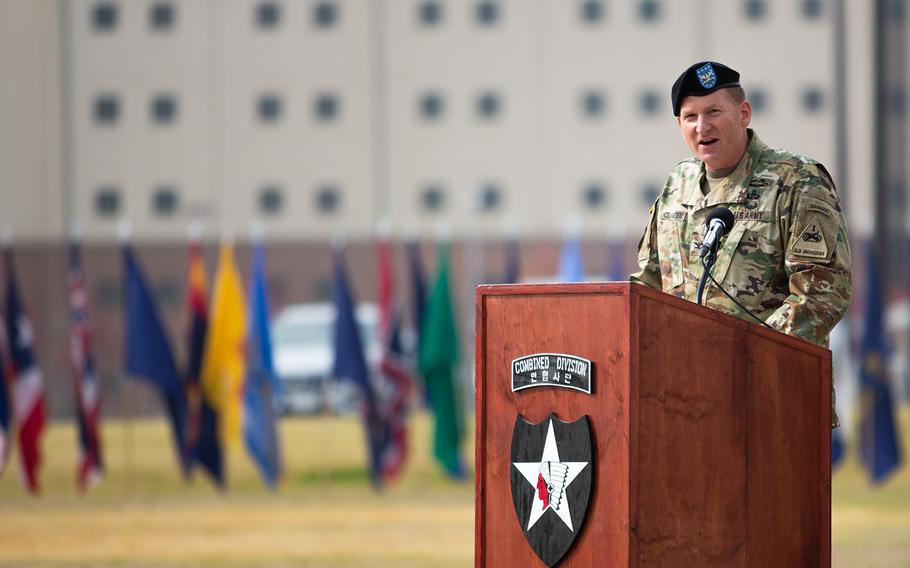 CAMP HUMPHREYS, South Korea — The 1st Armored Division made its debut on the divided Korean Peninsula on Monday when its third brigade took the mantle as the U.S. military’s armored spearhead, unfurling its unit colors at the new home of the 2nd Infantry Division.

The Bulldog brigade will begin a nine-month tour as the sixth rotational armored brigade since the Indianhead division inactivated its last organic brigade combat team in 2015.

Its arrival comes as tensions have ebbed amid a diplomatic push to persuade North Korea to give up its nuclear weapons.

“This is one of the most strategically significant deployments in our recent history,” Col. Marc Cloutier, 3ABCT commander, said during the ceremony. “We live in interesting times and it’s promising to see negotiations ongoing toward a better peace.”

“We all hope this year is a breakthrough year, but we stand ready nonetheless to deliver a lethal capability to our [South Korean] partners if circumstances warrant it,” he added.

The rotation to South Korea also marks a first for the unit that spent most of its history in Europe, fighting in North Africa and Italy during World War II, then spending most of its time in Germany before moving to Texas in 2008.

2nd ID commander Maj. Gen. Scott McKean welcomed the Bulldogs, saying their tanks and troops will bring “fire, maneuver, shock effect to dominate any battlefield it encounters,” and he expects them to live up to division’s mantra of being ready to “fight tonight.”

McKean also thanked their Raider brigade predecessors, who came to South Korea last February when “the clouds of war were dark and looming.” He credited them for helping ensure peace on the peninsula.

Cloutier later told Stars and Stripes that he and his brigade, which includes fresh M1 Abrams tanks and M2 Bradley infantry fighting vehicles deployed from Fort Bliss to replace aging vehicles in South Korea, will conduct a series of training events to keep their “knives sharpened” during the deployment.

Cloutier, who is on his first assignment to the peninsula, said he’s excited to work with South Korean troops who will be integrated for the first time at the brigade and battalion level. 2nd ID already includes South Koreans in positions at the division level.

Cloutier said he and his soldiers “follow the news very closely” and welcome their new role on peninsula.

“We understand that our political and elected leaders will dictate the terms of the negotiations [with North Korea],” he said. “Our job as an armored brigade combat team is to provide that lethal deterrent and, if deterrence fails, a lethal punch.”

Roughly 28,500 U.S. troops are stationed on the divided peninsula where the two Koreas are technically at war after the 1950-1953 Korean War ended with an armistice instead of peace treaty.