Fountain, church, monument among the sites on a stroll through Kaiserslautern 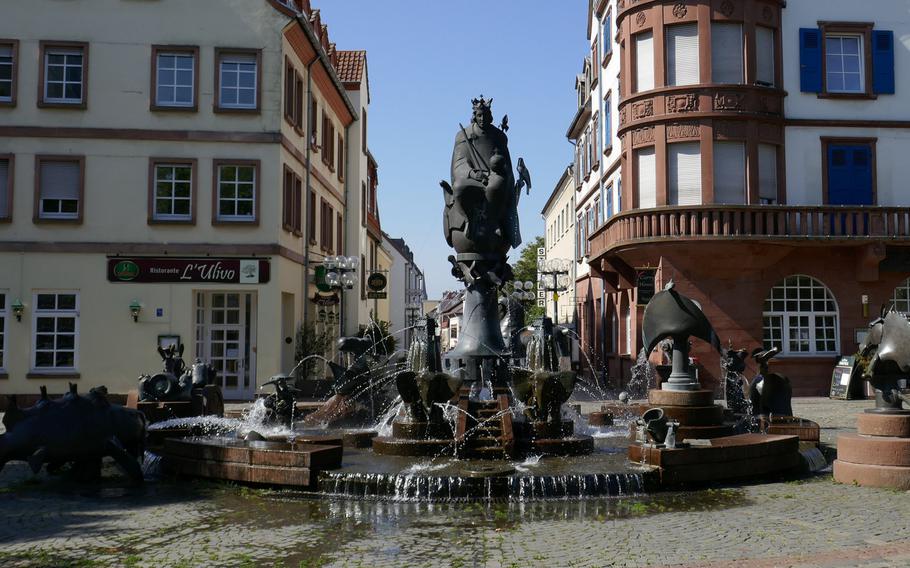 The fantastic Kaiserbrunnen, topped by Emperor Frederick Barbarossa and King Rudolf von Habsburg, is full of symbols of the history of the city. The fountain is more than 16 feet tall and stands on Mainzer Tor square at the end of Steinstrasse. (Michael Abrams/Stars and Stripes)

The fantastic Kaiserbrunnen, topped by Emperor Frederick Barbarossa and King Rudolf von Habsburg, is full of symbols of the history of the city. The fountain is more than 16 feet tall and stands on Mainzer Tor square at the end of Steinstrasse. (Michael Abrams/Stars and Stripes) 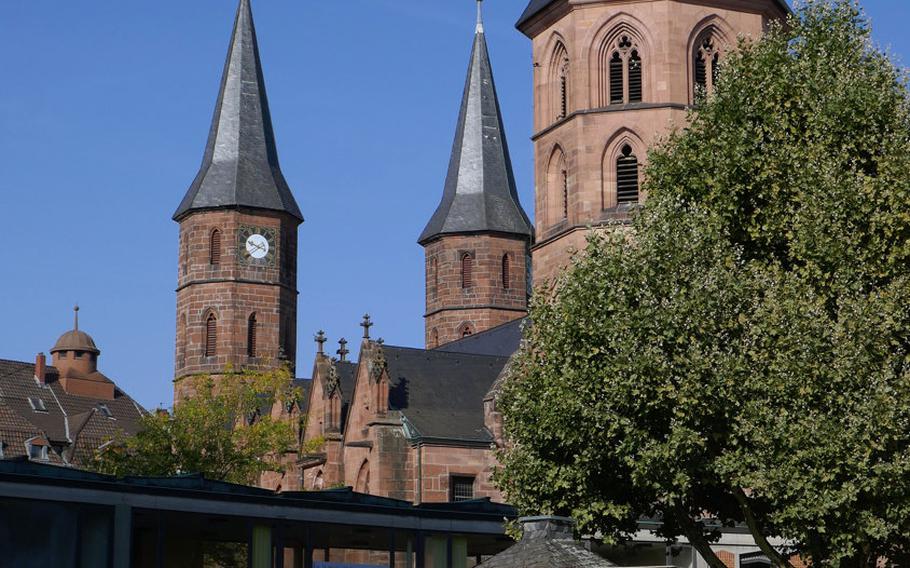 There is a farmer's' market Tuesdays and Saturdays on Stiftsplatz in Kaiserslautern, Germany. In the background is the church that gives the square its name, the Stiftskirche, or Collegiate Church. (Michael Abrams/Stars and Stripes) 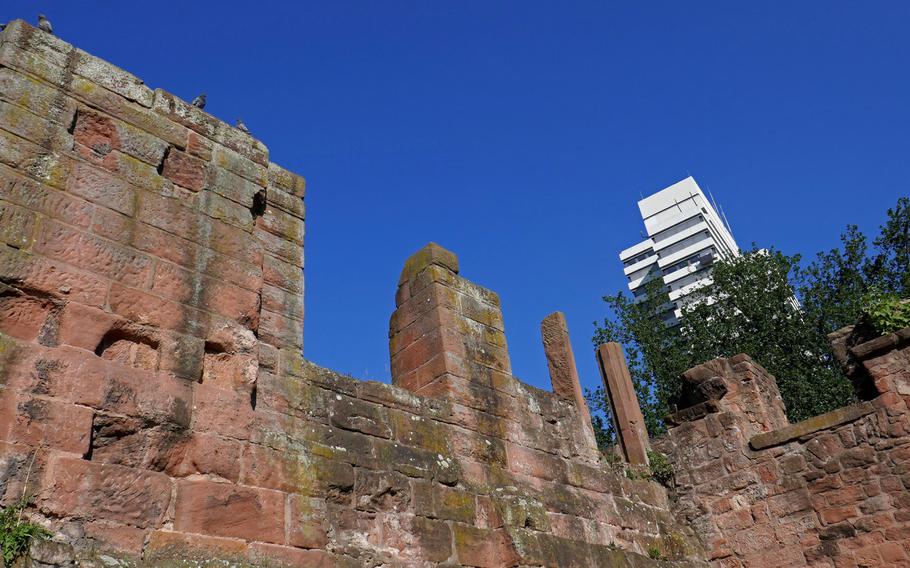 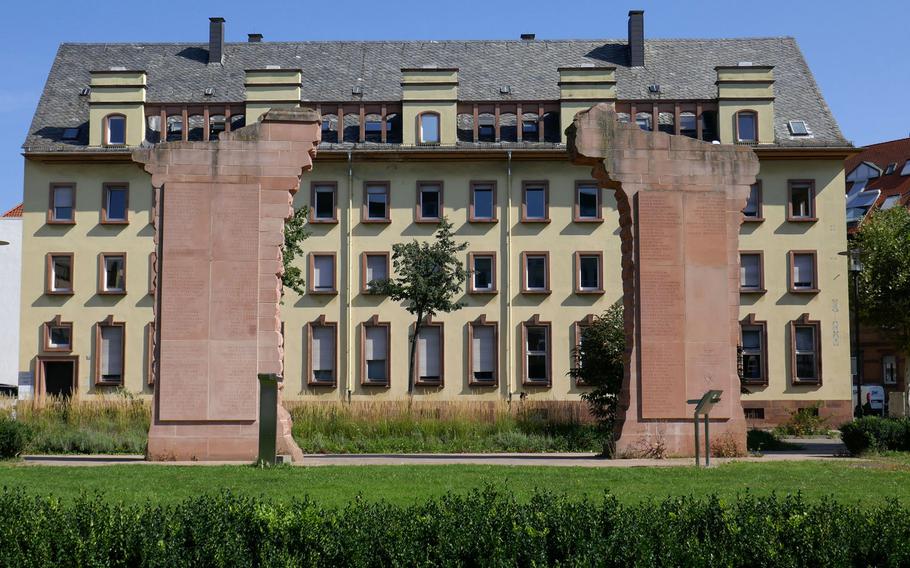 The memorial on Synagogenplatz, where the Kaiserslautern synagogue stood before being destroyed by the Nazis in 1938. It is a reconstruction of two pillars from the north entrance of the building. Inscribed on them are the names of the 192 victims of the Holocaust from the city. Through binocularlike viewers spread across the square you can see what the synagogue once looked like. (Michael Abrams/Stars and Stripes) 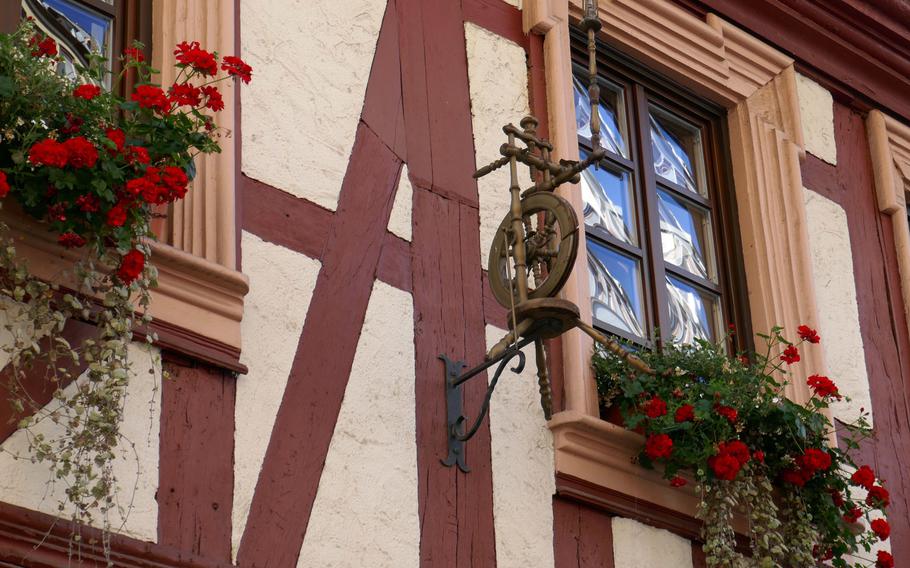 A spinning wheel adorns the facade of the half-timbered building that houses the Spinnraedl restaurant. It dates back to at least 1742, and the building is one of the oldest half-timbered houses still standing in Kaiserslautern. (Michael Abrams/Stars and Stripes) 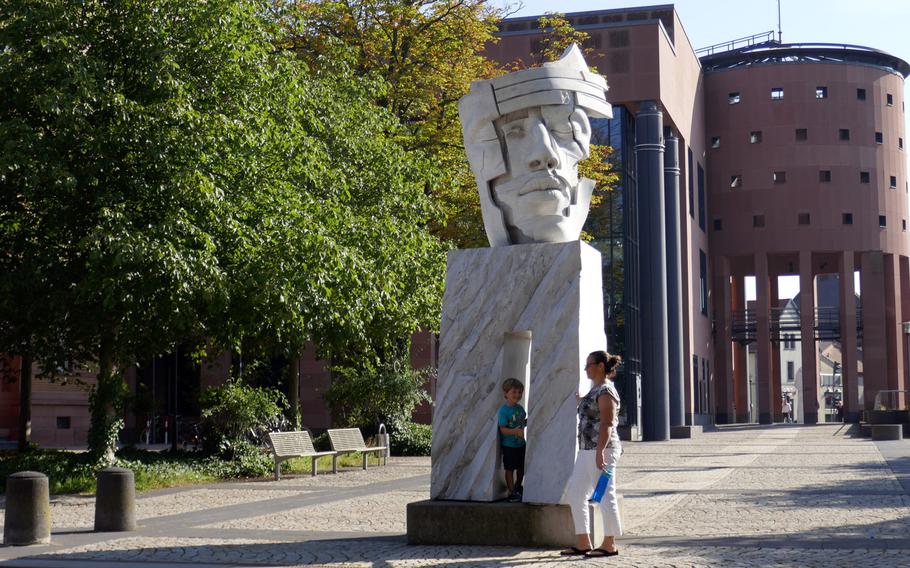 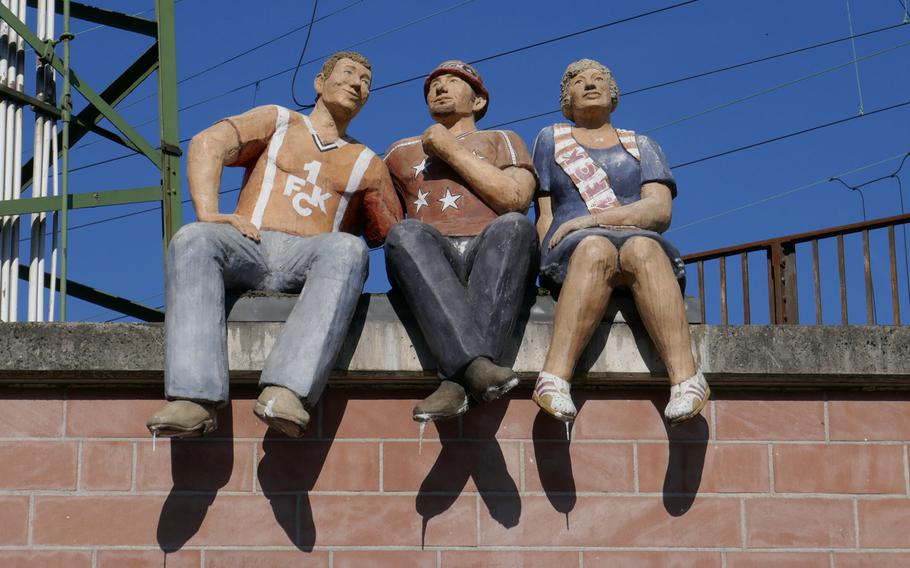 Three 1. FC Kaiserslautern fans sit on a wall near the train station, looking down at a team that is part of an installation on a traffic circle at the foot of the road leading to the legendary Fritz Walter Station, home to the city's popular soccer team. (Michael Abrams/Stars and Stripes) 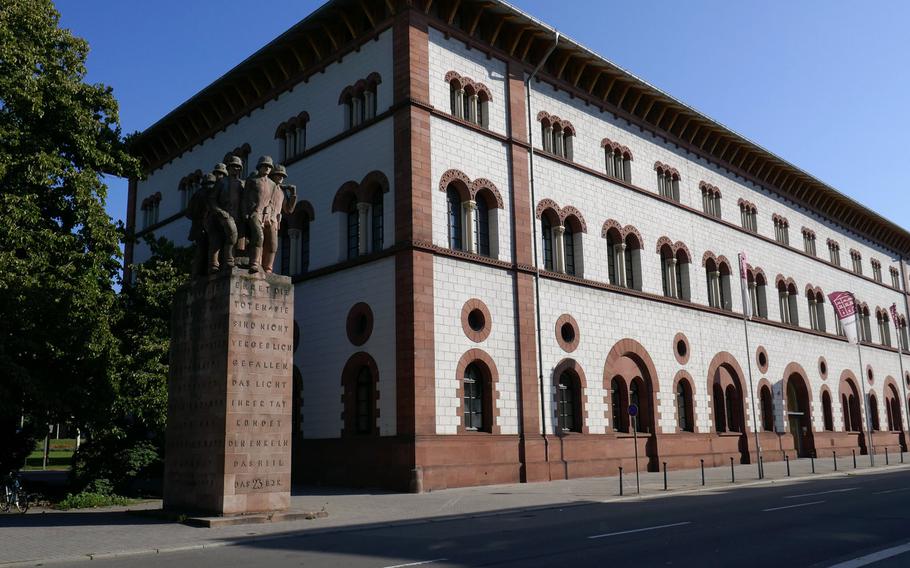 The 23rd Monument, dedicated to the soldiers of the 23rd Bavarian Infantry Regiment, stands next to Kaiserslautern's 19th-century Fruchthalle, a concert and exhibition hall. (Michael Abrams/Stars and Stripes) 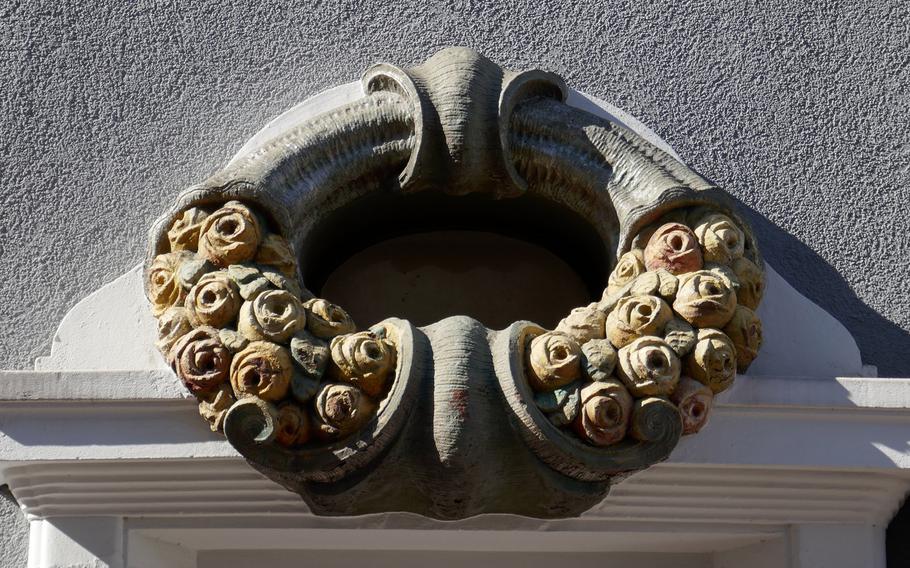 Sometimes you have to look up when you are walking through the streets of Kaiserslautern, Germany, to see things like this ornamental decoration above a doorway. (Michael Abrams/Stars and Stripes) 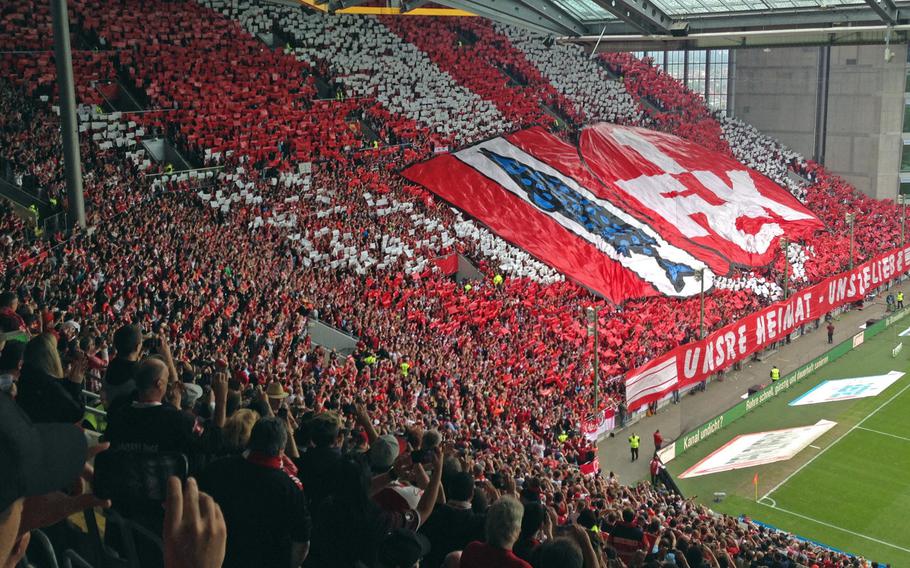 The Westtribune, the fans' grandstand at the legendary Fritz Walter Stadion before the start of a 1. FC Kaiserslautern soccer game.The team has been relegated to the third division this year, but it can still expect the league's highest fan turnout. The stadium was used during the 2006 World Cup, where the U.S. and Italy played to a 1-1 tie. (Michael Abrams/Stars and Stripes)

I used to say the only good thing about Kaiserslautern is that it is a stop on the express train to Paris.

After a recent visit, I have to admit I might have been a little tough on this German city, nestled in the hills of the Palatinate Forest. There are some interesting things to see while walking through the downtown area of what Americans call K-Town.

Let’s start at the fantastic fountain known as Kaiserbrunnen, topped by Emperor Frederick Barbarossa and King Rudolf von Habsburg, two figures important in the town’s chronicles. The structure is more than 16 feet tall and almost 40 feet in diameter. It is a myriad of symbols, large and small, representing Kaiserslautern’s history. A nearby sign explains it all.

Stroll from here up Steinstrasse and you come to St. Martin’s Square along with the church of the same name. Once part of a Franciscan monastery, today it is the Catholic parish church.

Take a left onto Spittelstrasse at the end of the square and walk until you come to a binocularlike contraption. Look through it and you’ll see what the synagogue that once stood across the street looked like.

The two pillars that stand here are reconstructions of ones from the original building, which the Nazis destroyed in 1938. Inscribed on them are the names of the city’s 192 victims of the Holocaust.

Nearby is the expansive but boring Stiftsplatz — except on Tuesdays and Saturdays, when a wonderful farmers’ market takes place here.

Behind it is the medieval Stiftskirche. Check out the fountain in front of it and the stained-glass window inside.

On the more modest Schillerplatz is the Spinnraedel, a restaurant that has been around for centuries in one of K-Town’s oldest half-timbered houses.

On Fruchthallstrasse you can see the World War I monument, dedicated to the 23rd Bavarian Infantry Regiment. (This part of Germany once belonged to Bavaria.)

Next to it is the 19th-century Fruchthalle, a concert and exhibition hall.

Cross Burgstrasse and you come to the ruins of the medieval Kaiserpfalz (Imperial Palace), and subsequent royal buildings built here. The high-rise towering over it is city hall.

Nearby, two large masks made of Carrara marble flank Kaiserslautern’s Pfalztheater. It offers musicals, operas, ballets and plays on its two stages.

Looking back across the ruins you can see the town’s newest palace of commerce, the K in Lautern mall.

More shopping can be found on Marktstrasse and Fackelstrasse.

After dusk, and especially on weekends, you can’t help noticing K-Town’s nightlife.

With Army posts and a university in town and an air base nearby, it probably has more bars and cafes per capita than most cities its size.

Walk to the other end of downtown near the train station. Before you get to the railroad underpass, you will see statues of soccer players — including an American — which were erected in 2006, when the city hosted World Cup games.

Pass under the tracks and you come to another set of statues. This one represents the 1. FC Kaiserslautern soccer team and its fans. From here a road leads up to the team’s legendary Fritz Walter Stadium. The hilltop on which it’s erected offers a splendid bird’s-eye view of the city you’ve just strolled through.

DIRECTIONS: Kaiserslautern is off the A6 in west-central Germany. From Wiesbaden, take the A671, A60 and A63; from Stuttgart, take the A81, A6, A61 and A6 again; from Baumholder, take the A62 and A6. You can also go by rail, but that usually means a change of trains from most destinations.

TIMES: Anytime, but Tuesdays and Saturdays are market days. The market is open 7 a.m. to 1:30 p.m.

COSTS: There is practically no free parking in Kaiserslautern. The Altstadt parking garage is one of the cheapest at 1 euro per hour.

FOOD: There are plenty of places to eat in all price ranges. The Spinnraedl is an old restaurant serving typical German food.

INFORMATION: The city’s website, which has a lot of info in English, is kaiserslautern.de. If you want to see a 1. FC Kaiserslautern soccer match at the Fritz Walter Stadium, go to fck.de.