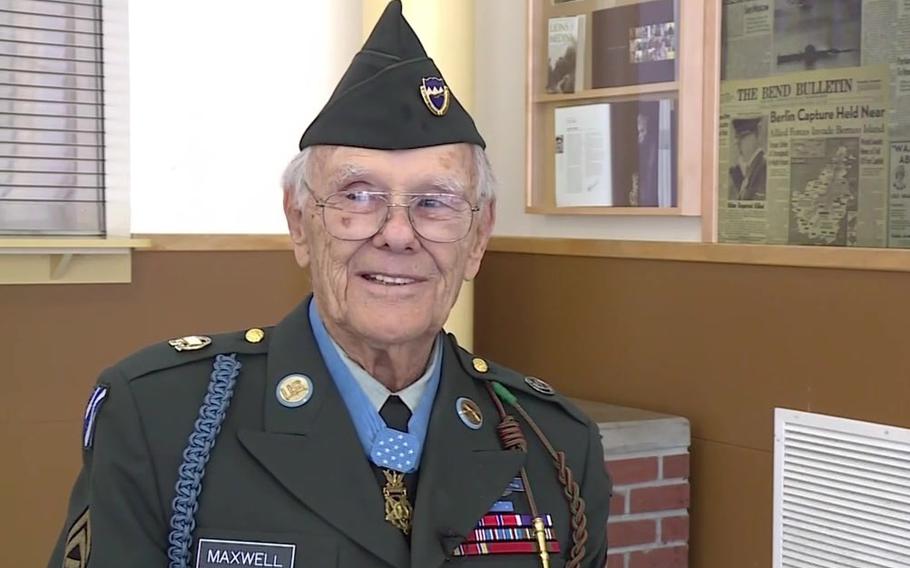 Robert Dale Maxwell, shown here in 2017, is the oldest living Medal of Honor recipient. On Sept. 7, 1944, near Besancon in eastern France, Maxwell was one of four soldiers, armed only with .45 caliber pistols, defending an observation post against enemy machine guns and grenades. When a grenade landed amidst the squad, Maxwell threw himself on it, shielding the others from the blast and permanently maiming himself. (Screenshot via YouTube) 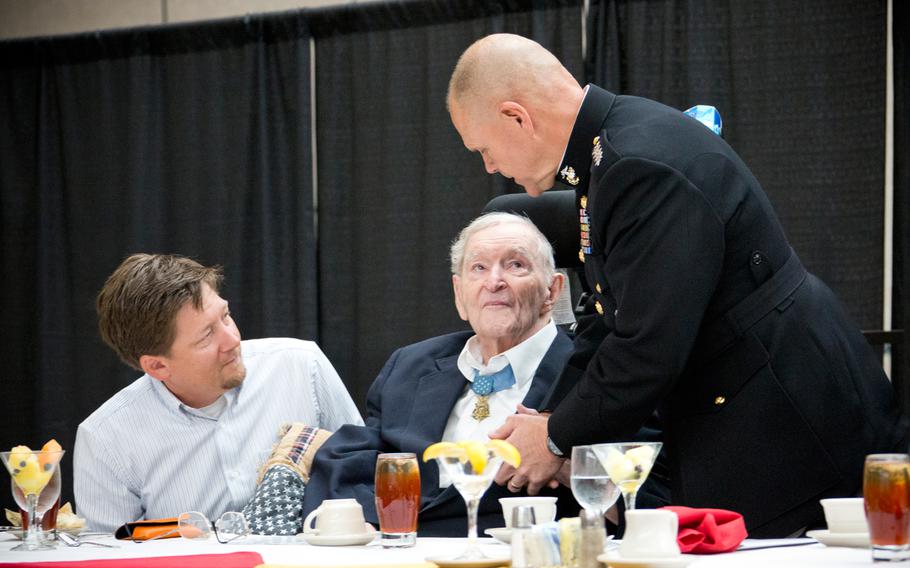 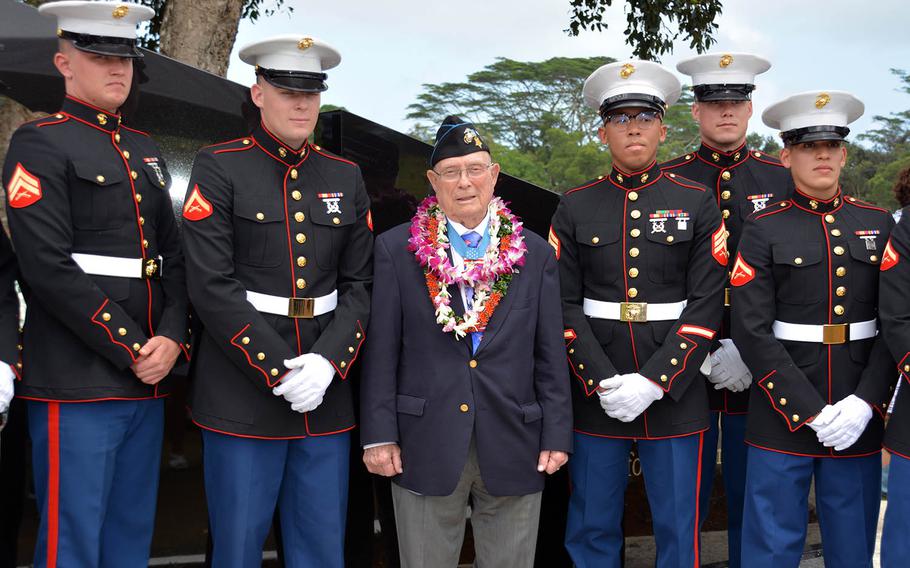 The United States awarded 464 Medals of Honor, the nation’s highest recognition for acts of valor in battle, during World War II. Almost three-fifths of the medals were awarded posthumously.

The 198 surviving recipients have now dwindled to four, the youngest at 92 years old.

Now, an organization is preparing a petition urging that a state funeral be held for the last of them when he dies.

“We are petitioning the president that when the last of these four heroes leave us, they be given a state funeral in Washington, D.C.,” said Bill McNutt, chair and co-founder of State Funeral for World War II Veterans.

“America hasn’t had a state funeral in 14 years, since [former President] Ronald Reagan died,” he said. “Most people don’t know what a state funeral is. The country is so desperate for something that is unifying, not political, yet patriotic. This is all of those things.”

The ceremony would also serve to honor the 16 million men and women who served in America’s military from 1941 through 1945, he said.

As of March 30, more than 3,800 people had signed the petition posted on www.change.org.

The president and CEO of the National World War II Museum in New Orleans has formally endorsed the petition drive.

McNutt’s idea for a Medal of Honor state funeral began with the February 2014 death of Walter Ehlers, who had been awarded the Medal of Honor for actions as an Army sergeant during the D-Day invasion of France.

Ehlers was the godfather to McNutt’s then 10-year-old daughter, Rabel.

As the family prepared to attend Ehlers’ funeral, McNutt wanted to show his daughter what to expect to see during a military funeral so he showed her footage of Reagan’s state funeral on YouTube.

“She turned to me and said, ‘Daddy, aren’t they going to do a big funeral in Washington, D.C., for Uncle Ehlers and his friends?’” McNutt said, describing it as a “from-the-mouth-of-babes” moment.

He set about researching the protocol surrounding state funerals and learned that while presidents and presidents-elect are eligible for state funerals, a sitting president can also designate individuals for that honor.

Non-president state funerals have been held infrequently in America’s history. The last was in 1964 for five-star General of the Army Douglas MacArthur. President John F. Kennedy had authorized the state funeral, and his successor, Lyndon Johnson, carried out the designation after Kennedy was assassinated in 1963.

McNutt said he has “no idea” how President Donald Trump and the White House staff will respond to the petition. McNutt, who worked in the White House during the final year of the Reagan administration, said that job experience gave him some idea of “how the game is played.”

“Everyone who works in the West Wing, they all have their own pet initiatives, which have nothing to do with their jobs,” he said. Such staffers can foster or smother initiatives, he said.

“We’re in a game without rules. We might get 100,000 names on a petition and he might say no. But maybe some member of his family will think this is a worthy cause and they’ll pick up our banner and charge into the Oval Office with it.”

The group has organized in 26 states, meaning either a state chair or board members are in place.

“We’re trying to get a state chair and eight state board members in every state,” McNutt said. “Then they organize their states any way they see fit.”

Donald Ballard, a Vietnam War-era Medal of Honor recipient, is on the petition group’s national board and is treasurer of the Medal of Honor Society.

“I know all the World War II guys, and when the idea came up to do this, I was in favor of it,” he said. “I know the recipients quite well, and they would be deserving. It’s something I support.”

He said Williams was particularly enthusiastic about the idea.

“We think it’s an important step to recognize the Medal of Honor recipients — and veterans as a whole — at that level of dignity and respect,” he said.

Ballard said he is “optimistic” that Trump will be moved by the petition.

“He’s very supportive of the military,” he said. “I don’t think it costs the government anything, or very little, to allow this to happen. It elevates the presidency.”

McNutt noted one other significant milestone this state funeral would represent.

“Our nation has had many state funerals for generals, but never one for an enlisted man, and all four of the remaining Medal of Honor recipients from World War II are enlisted men,” he said. “We’re going to change American history.”

Surviving Medal of Honor recipients from World War II Charles Henry Coolidge, age 96 As an Army technical sergeant heading a group of machine-gunners and rifleman, Coolidge was charged with holding a hilltop position in southern France near the German border on Oct. 24, 1944. He and his men held off a fierce enemy attack for four days, including repelling two German tanks using grenades. One tank targeted Coolidge with five separate rounds.

Francis Sherman “Frank” Currey, age 92 As a member of a rifle squad, Currey was charged with guarding a bridge crossing on Dec. 21, 1944, in Malmedy, Belgium. During an attack by German infantrymen, Currey used a bazooka and anti-tank grenades to disable four tanks. He rescued five fellow soldiers pinned down by enemy fire.

Robert Dale Maxwell, age 97 Maxwell saw combat in north Africa and then Sicily, where he was wounded. After recovering, he rejoined his Army unit to see further action in France. On Sept. 7, 1944, near Besancon in eastern France, Maxwell was one of four soldiers, armed only with .45 caliber pistols, defending an observation post against enemy machine guns and grenades. When a grenade landed amidst the squad, Maxwell threw himself on it, shielding the others from the blast and permanently maiming himself.

Hershel Woodrow “Woody” Williams, age 94 The sole surviving Marine Corps Medal of Honor recipient from the war, Williams was tasked with clearing a network of Japanese pillboxes using a flamethrower on Iwo Jima, Feb. 23, 1945. He spent four hours blasting flames into the pillboxes that had stymied advance for days, racing back to the Marine Corps lines to refuel the flamethrower, and then running again into the breach – all while being fired upon. At one point, he mounted a pillbox, stuck the flamethrower’s nozzle through an air vent and killed the enemy inside. He repelled a bayonet attack against him by enemy riflemen.