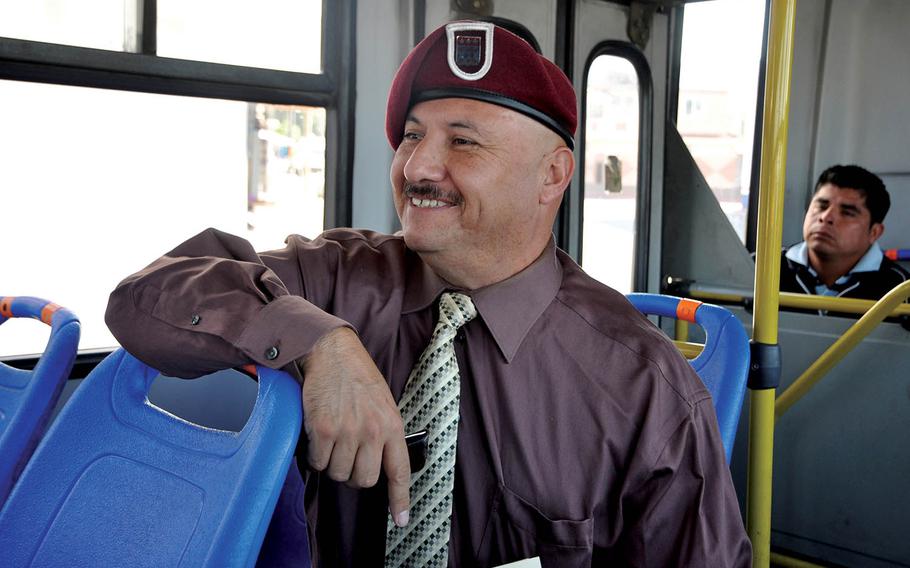 Buy Photo
Hector Barajas, founder of the Deported Veterans Support House in Tijuana, Mexico, takes a bus to the Mexico-U.S. border on June 2, 2016, where he was meeting U.S. immigration officials for fingerprinting. (Dianna Cahn/Stars and Stripes) 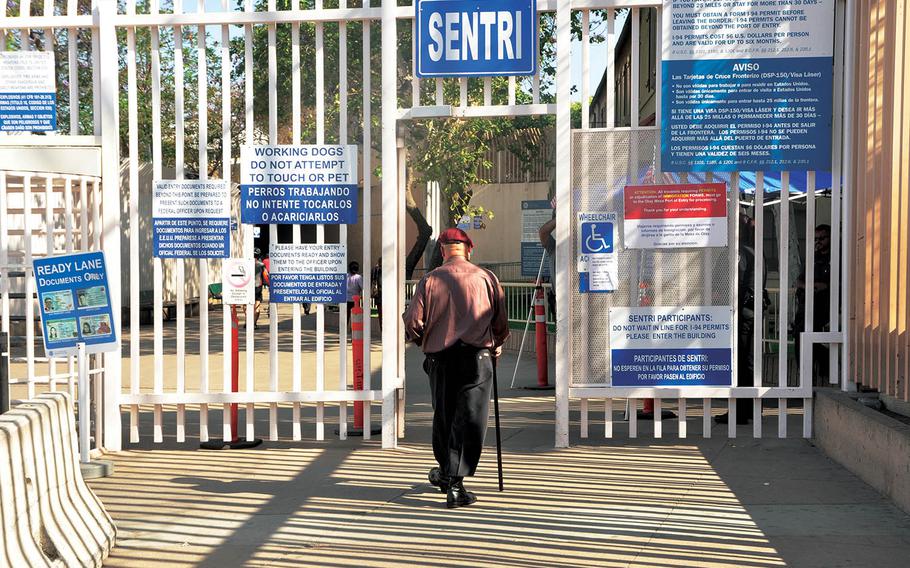 Buy Photo
Hector Barajas, founder of the Deported Veterans Support House in Tijuana, Mexico, walks through the gates at the Mexico-U.S. border on June 2, 2016, where he was meeting U.S. immigration officials for fingerprinting. (Dianna Cahn/Stars and Stripes) 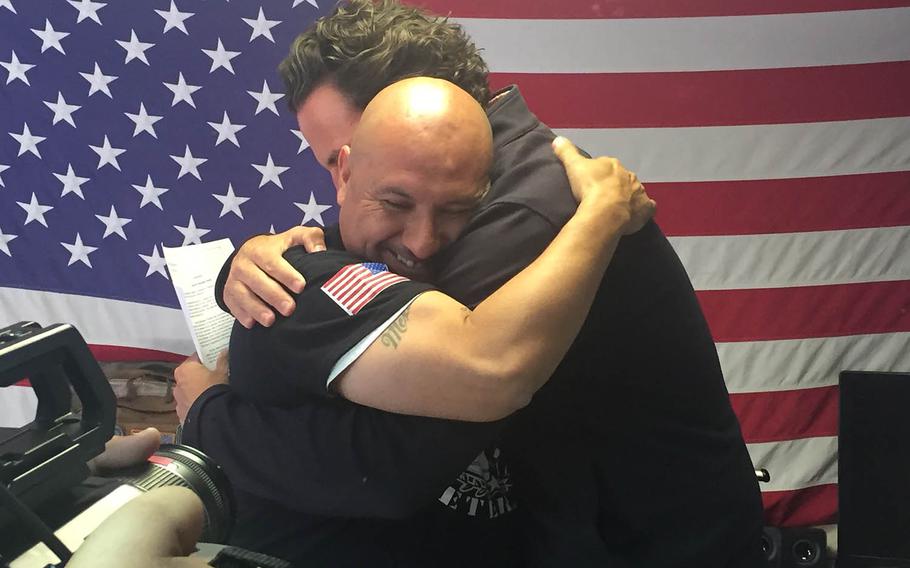 Deported Army veteran, Hector Barajas-Varela, hugs former state Assemblyman and Marine Nathan Fletcher on April 15 at the shelter for deported veterans in Tijuana, Mexico, after learning that he'd been pardoned by the California governor. (Courtesy of Hector Barajas-Varela) 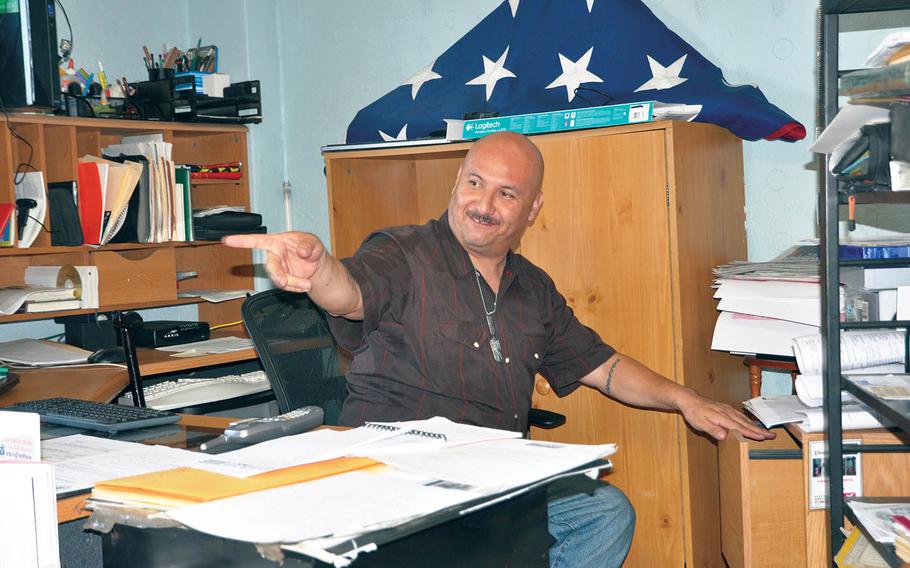 Buy Photo
Deported veteran Hector Barajas, is busy at his desk at the shelter he founded in Tijuana, Mexico on June 1, 2016. Barajas is being considered for naturalization after seven years of deportation. (Dianna Cahn/Stars and Stripes) 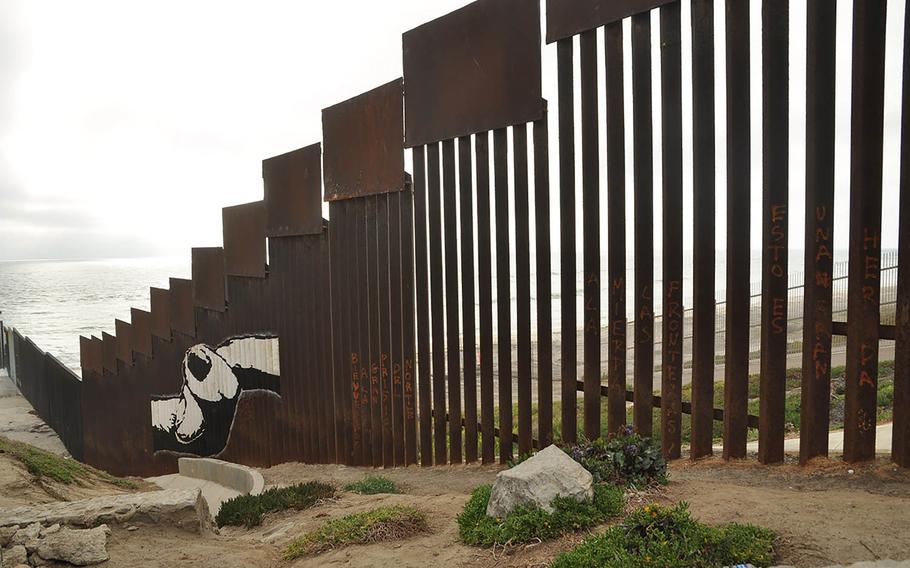 Buy Photo
The fence demarcating the border between Tijuana, Mexico and San Diego, California plunges deep into the Pacific Ocean. When families are allowed to meet on opposite sides, they reach through the tiny steel grating and link pinkies. (Dianna Cahn/Stars and Stripes) 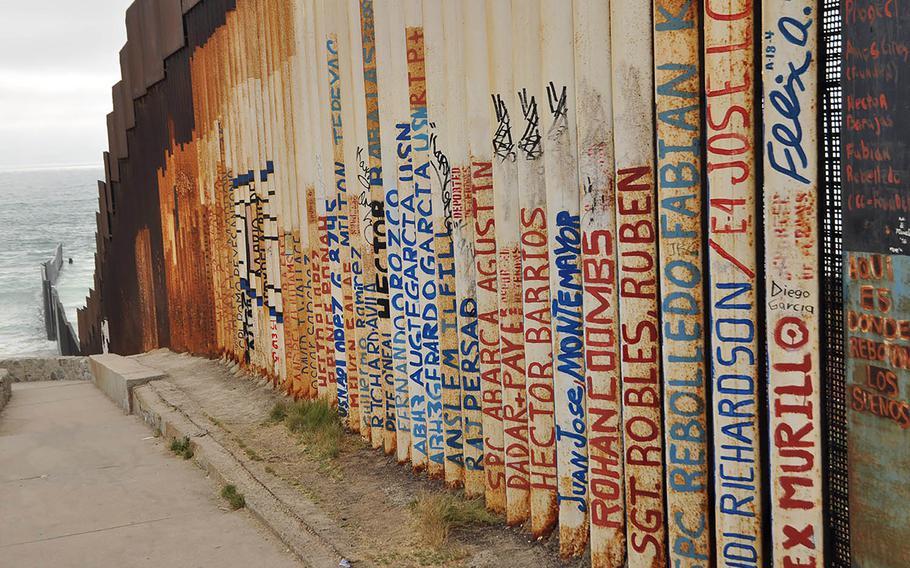 Buy Photo
Graffiti on the fence demarcating the border between Tijuana, Mexico and San Diego, California that plunges into the Pacific Ocean, has been painted with the names of deported American veterans. (Dianna Cahn/Stars and Stripes)

WASHINGTON — For five years, deported Army veteran Hector Barajas-Varela has been fighting one of America’s largest bureaucracies. Now, he’s seeing some payoff for the deported vets he advocates for in Tijuana, Mexico.

The Department of Veterans Affairs’ newly established clinic in Tijuana just began giving exams to determine whether deported veterans have injuries or illnesses connected to their military service. If they do, they could become eligible for government-paid health care and monthly paychecks from the VA.

“This is definitely important,” Barajas, 40, said. “It’s huge for them to do something specifically for deported veterans.”

In 2013, Barajas founded the Deported Veterans Support House in Tijuana, which provides food, shelter and clothing for veterans removed from the U.S., who have little access to health care or other services available to veterans stateside. Barajas has connected with about 70 deported veterans in the Tijuana area, and he believes many of them will set appointments through the clinic. A few veterans have already had exams and are waiting to hear about their eligibility.

Veterans can get general medical exams at the clinic, as well as ones for hearing and mental health problems. They’ll receive a disability rating, which is necessary for obtaining VA benefits. If they are service-connected through the VA, the vets can get medical expenses reimbursed through the VA’s Foreign Medical Program.

Before establishing a location in Tijuana, the VA had sites in Mexico City and Guadalajara, Mexico, to help vets determine their eligibility for benefits. But those are each more than 1,300 miles away, and veterans struggled to find the money to go.

“It was impossible for some of these guys to pay for a ticket and get where they needed to,” Barajas said. “It’s much easier to be able to get an exam here.”

The Congressional Hispanic Caucus said there are about 3,000 cases of veterans being deported to countries around the world, though the U.S. government doesn’t track them.

Noncitizens who serve in the U.S. military are granted the right to citizenship, but they must apply for it – a requirement some advocates and lawmakers believe isn’t made clear to servicemembers. Veterans who haven’t attained citizenship can be deported if they are convicted of certain infractions, including drug crimes, domestic violence and voter fraud.

The VA did not respond to a request for comment on the decision to establish the site in Tijuana. But Barajas said it was likely made now, after five years of advocacy, because of the involvement of members of Congress.

“When we started doing this in 2013, there was no pressure from anybody, nobody pushing it legislatively,” Barajas said. “What happened in the last year, Congress got involved – and I think that’s what made the difference.”

The 31-member Congressional Hispanic Caucus, as well as Democrats on the House Committee on Veterans’ Affairs, took up the issue last year and traveled to Tijuana to meet with deported veterans. They’ve introduced multiple bills aiming to have the government better inform servicemembers of citizenship opportunities and fast-track their status, and to allow veterans to temporarily return to the U.S. to receive health care at VA facilities.

While the legislation has made little progress in Congress, the lawmakers went directly to the VA and Department of Homeland Security, pleading with leaders to stop deporting veterans. Short of that, they’ve asked the VA for more aid for veterans already removed.

Rep. Mark Takano, D-Calif., a Democrat on the House Committee on Veterans’ Affairs, announced this week the decision by the VA to establish a clinic in Tijuana. The VA made the decision in late November, Takano’s office said, just days after Democrats held a news conference rallying for help for deported veterans.

“With access to compensation and pension exams, deported veterans will finally have access to the financial benefits they are owed and the health care they need for conditions related to their service,” Takano said in a written statement.

Multiple members of the House VA committee and the Hispanic Caucus said in written statements that they viewed this as a first step, with the final goal being readmittance into the U.S. for deported veterans. They called the deportation of honorably discharged veterans “shameful,” “ridiculous” and “sickening.”

“The establishment of an examination location in Tijuana was long overdue,” said Rep. Juan Vargas, D-Calif., a member of the Hispanic Caucus. “We must keep working in Congress to ensure that deported veterans have access to the benefits and the health care services they need and bring deported veterans home.”

The progress has come at what could be the end of Barajas’ time in Tijuana. He was pardoned by California Gov. Jerry Brown in April for the crime of shooting at a car. The pardon is not a guarantee that he can return to the U.S., but it could help him with an appeal to immigration authorities. He submitted an application for citizenship, and he hopes to hear back about his status within the next couple of months, he said.