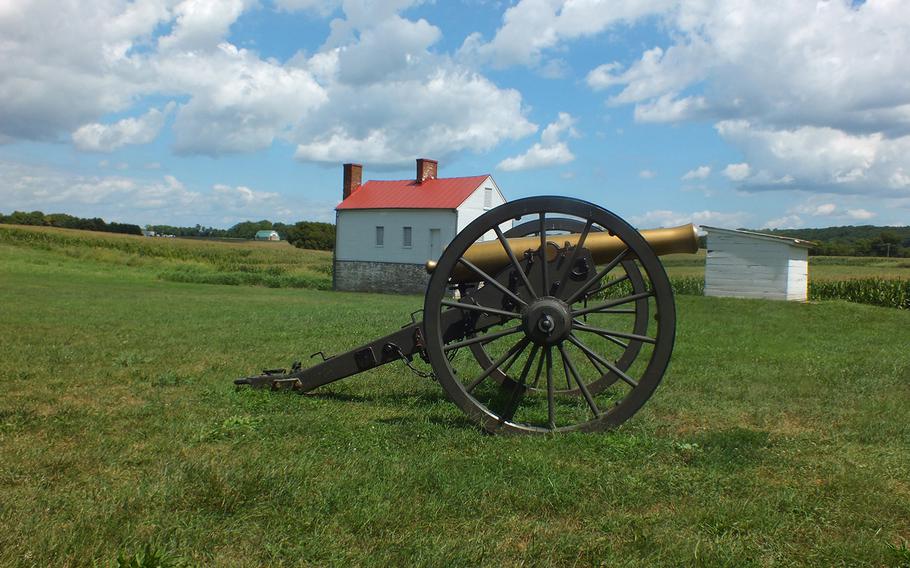 Buy Photo
This Civil War cannon sits at John Best farm just outside Frederick, Md., where the Battle of Monocacy began on July 9, 1864. Monocacy offers military history buffs a chance to wander at leisure through the battle sites without fighting the crowds of better-known parks such as Gettysburg in Pennsylvania. (Robert H. Reid/Stars and Stripes) 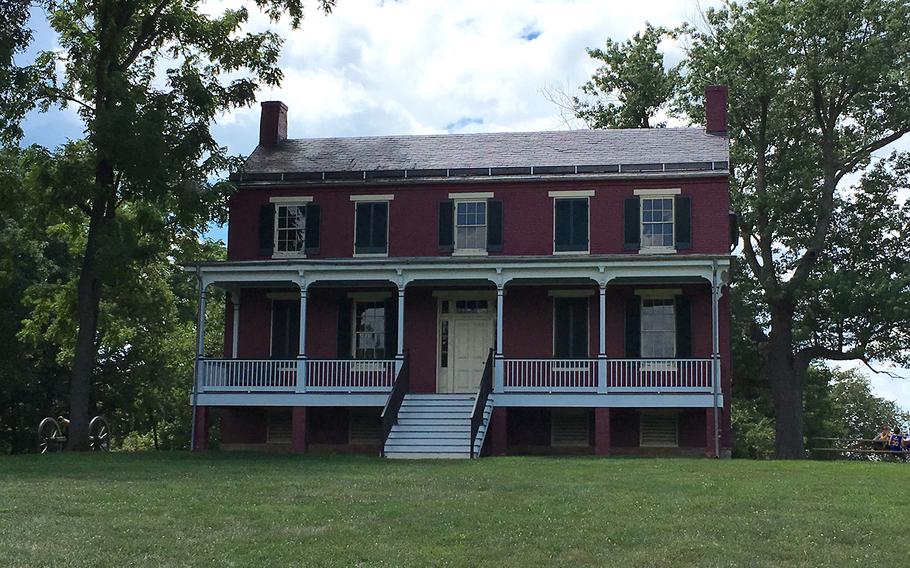 Buy Photo
The Worthington family farm house near Frederick. Md. Confederate artillery fired on Union troops from the front yard in the Battle of Monocacy on July 9, 1864. (Robert H. Reid/Stars and Stripes) 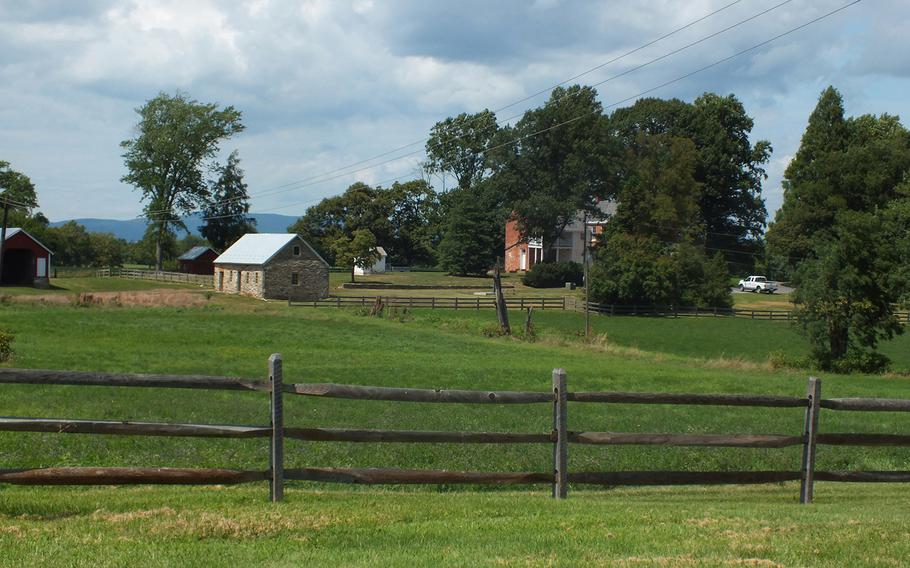 Buy Photo
Buildings of the Thomas Farm, which was captured and recaptured by both sides in the Battle of Monocracy, July 9, 1864, near Frederick, Md. (Robert H. Reid/Stars and Stripes) 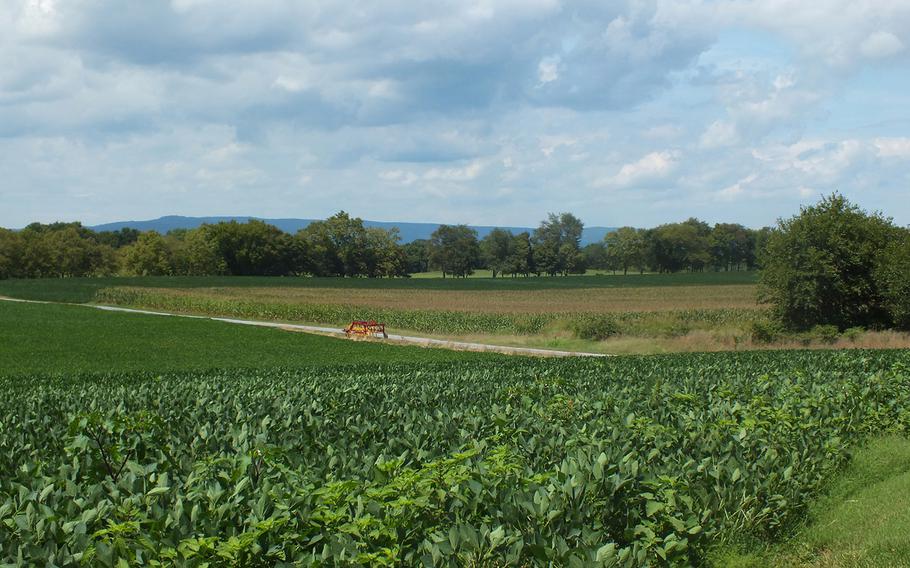 Buy Photo
Fields of the Thomas Farm, which was the scene of the heaviest fighting in the Battle of Monocacy, July 9, 1864, near Frederick, Md. (Robert H. Reid/Stars and Stripes) 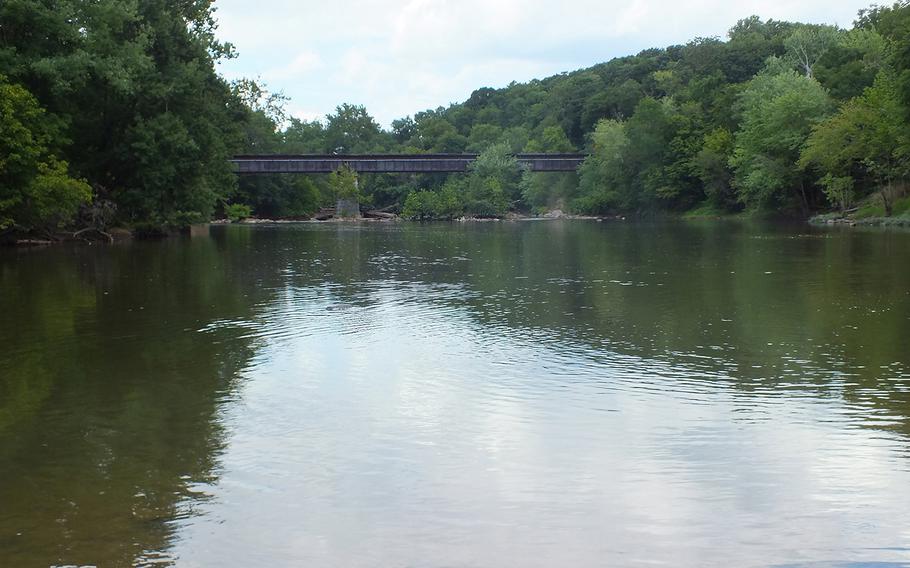 The Monocacy River, with one of the bridges defended by Union forces in the battle of Monocacy on July 9, 1864, near Frederick, Md. () 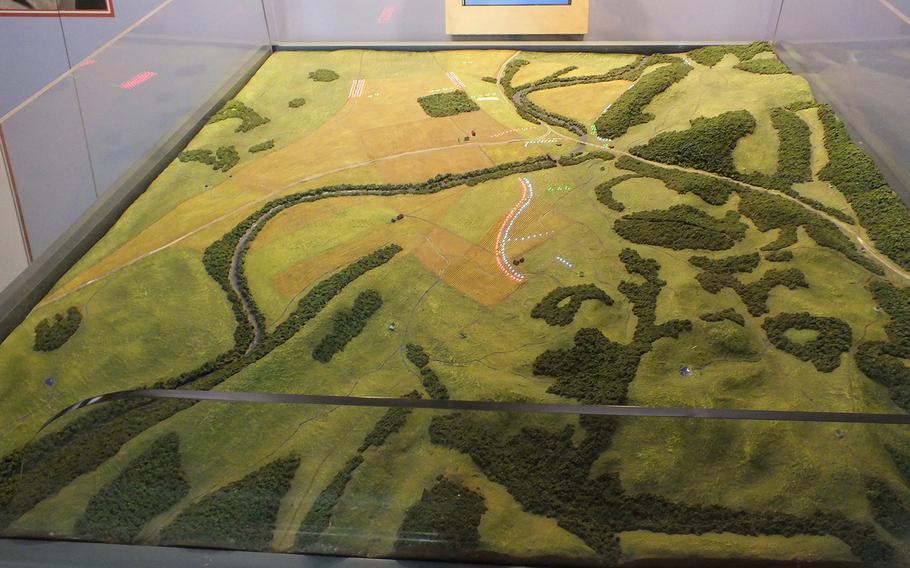 Buy Photo
An interactive table at the Monocacy National Battlefield Park outside of Frederick, Md., showing how the fighting raged on July 9, 1864. (Robert H. Reid/Stars and Stripes)

MONOCACY NATIONAL BATTLEFIELD PARK, Md. — It’s a Civil War battlefield that few people have heard of and even fewer visit.

But the July 9, 1864, fighting at the Monocacy (pronounced “min-AH-ka-see") railroad junction just outside Frederick, Md., was “the battle that saved Washington,” fought at a time when morale in the North was low and President Abraham Lincoln was facing electoral defeat from a growing peace movement.

A force of about 5,800 Union troops, most with no combat experience and led by a discredited general, held off 14,000 battle-hardened Confederates for a full day, buying time for reinforcements to rush to Washington, less than two days' march from Confederate lines.

“Monocacy saved Washington from capture or burning and helped bring about the re-election of Abraham Lincoln,” said park ranger Brian Dankmeyer. “It was a tactical defeat for the United States, but a strategic victory.”

Despite its relative obscurity, Monocacy offers military history buffs a chance to wander at leisure through the battle sites without fighting the crowds of better-known parks such as Gettysburg in Pennsylvania.

In 2013 about 43,000 people visited Monocacy, the National Park Service says, compared to more than 1 million visitors at Gettysburg or more than 370,000 at nearby Antietam.

Located only an hour northwest of Washington by car, the park offers a small museum with uniforms, weapon and relics as well as an interactive map of the fighting.

Visitors can take a self-driving tour around the 1,600-acre park or hike along trails through the rolling hills and along the banks of the Monocacy River, where Union troops first confronted the Confederates.

When the rival forces squared off at Monocacy, the outcome of the Civil War remained in doubt. Union victories at Gettysburg and Vicksburg a year earlier doomed chances for an outright Southern victory.

With war weariness on the rise in the North and a presidential election looming in November 1864, the peace wing of the Democrats nominated Gen. George B. McClellan, who wanted a negotiated settlement with the South. Lincoln himself feared the popular McClellan, the hero of the Battle of Antietam, would win.

In hopes of exploiting anti-war sentiment and relieving pressure on the Confederate capital Richmond, Gen. Robert E. Lee sent Gen. Jubal Early and up to 15,000 troops into the Shenandoah Valley with orders to move north into Maryland and threaten Washington.

Union commanders, focused on the fighting around Richmond, were barely conscious of the threat they faced. At first, Union generals dismissed the Confederates as a small raiding party. It took civilian railroad officials to raise the alarm, prompting the commander of the military district around Baltimore, Maj. Gen. Lew Wallace, to rush to Monocacy for his own reconnaissance.

The rival commanders could not have been more different. Wallace had been exiled to a rear guard administrative job after criticism of his performance at the Battle of Shiloh in 1862. After the war, he became rich after writing the biblical novel “Ben-Hur,” the most successful American work of fiction of the 19th century.

Early was a profane, hard-charging career soldier who extorted more than $200,000 from the citizens of Frederick to spare their town. He is largely credited with propagating the “Lost Cause” myth that romanticized the Confederacy for generations.

Realizing he was facing a formidable enemy, Wallace ordered inexperienced garrison troops to Monocacy and pleaded with Gen. Ulysses S. Grant for veteran reinforcements, some of which were quickly dispatched from the front lines around Petersburg, Va.

The battle began on the morning of July 9 near John Best’s farm when the Confederates advanced toward three bridges over the Monocacy, successfully defended by Union militia and green regulars.

Realizing his troops were bogged down, Early ordered his cavalry to ford the Monocacy and flank the Union lines. The Confederates ran head-on into intense musket fire from veterans of the Union Sixth Corps who had been rushed to the scene.

Early then ordered his best troops — veterans from Georgia and Louisiana — into the attack, finally turning the Union flank after a series of bloody assaults across the fields of Thomas Farm.

“The battle itself was a bare-knuckles soldiers’ fight,” historian Benjamin Franklin Cooling III of the National Defense University wrote. “Human will and firepower, not fancy maneuvers or brilliant generalship, determined the outcome.”

The road to Washington was open, but the Confederates had lost a full day. The exhausted Confederates reached northwestern Washington on July 11 and launched an attack the next day on Union troops at Fort Stevens, less than five miles from the White House.

It was the last time the Confederates would threaten Washington. With the capital secured and Union victories in Georgia, the political tide shifted. Lincoln won re-election, the first president to win a second term since Andrew Jackson in 1833.

Monocacy proved a Confederate tactical win but a strategic victory for the Union.