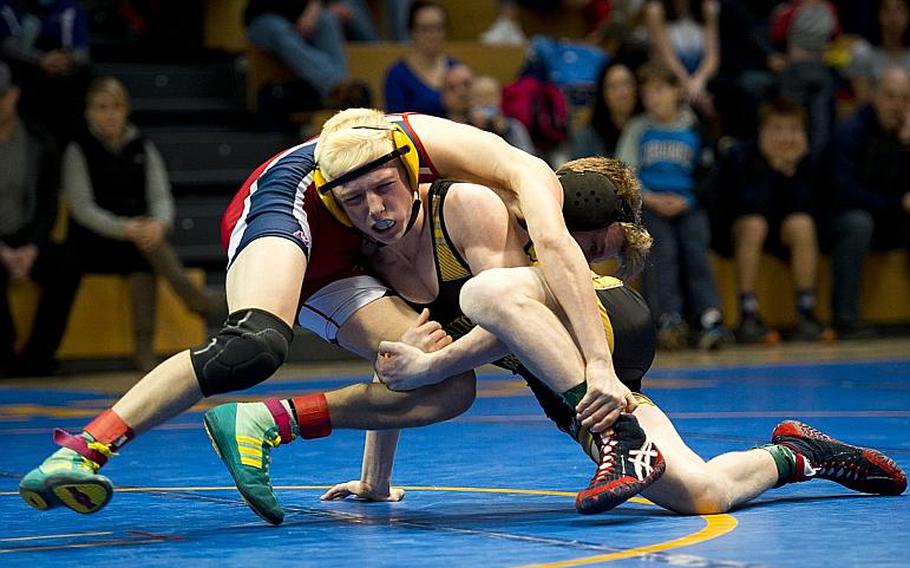 Buy Photo
Stuttgart's Benjamin Fielding, right, tries to get out from under Aviano's Liam Knowles during the DODEA-Europe wrestling championship in Wiesbaden, Germany, on Saturday, Feb. 18, 2017. (Michael B. Keller/Stars and Stripes)

It might be hard to believe after a winter in which he posted a 30-0 record with 27 pins, won his second DODEA-Europe championship in as many years and earned the honor of 2016-17 Stars and Stripes wrestling Athlete of the Year, but Stuttgart sophomore Benjamin Fielding wasn’t “100 percent confident” entering this season.

“I was a little nervous going in,” Fielding said.

Fielding had legitimate reason for that concern. He was competing at 126 pounds this year, a step up from the 120-pound level which he’d thoroughly dominated en route to a European title as a freshman. The fresh competition he faced was imposing.

For a while, at least. Fielding’s first foray into the 126-pound bracket fully restored his familiar confidence.

“When I saw them wrestle, I knew exactly what to do. I knew I could get them,” Fielding said. “After the first tournament, I felt stronger and faster than most of the guys I wrestled against.”

That’s not to say it was easy. Fielding said he had to diversify his pinning combinations - beyond the cradle that had served him so well as a freshman - to put larger shoulders to the mat. And the increased physicality of the higher weight class further forced him to “adapt his style.”

Fielding capped his undefeated regular season with an equally dominant European tournament. He won his second consecutive title Feb. 18 with a 46-second pinfall victory, the fastest win of any of the 14 European championship matches by more than two minutes, and helped deliver Stuttgart its fourth straight Division I team championship.

That’s not the only way Fielding helped his program this year. Panthers coach Norm Matzke said Fielding is a model student-athlete in terms of conduct, academics, personal improvement and leadership.

“A lot of the kids on the team look up to him, especially the freshmen. They see how good he is,” Matzke said. “He’s a good example for the other wrestlers on the team to follow.”

Fielding has started to grow into that role despite his status as a 10th-grader among tough, accomplished upperclassmen. He was voted a team captain by his teammates this season, an unusual honor for a Panthers sophomore.

“It is a little different because the seniors are the seniors, so they have the authority already,” Fielding said. “I know my skills as a wrestler, and I know I can help teach.”