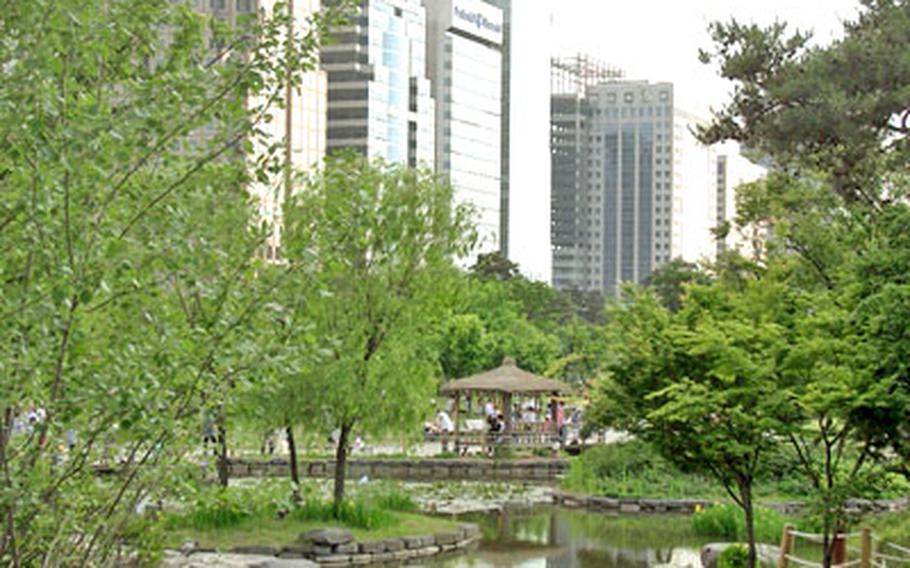 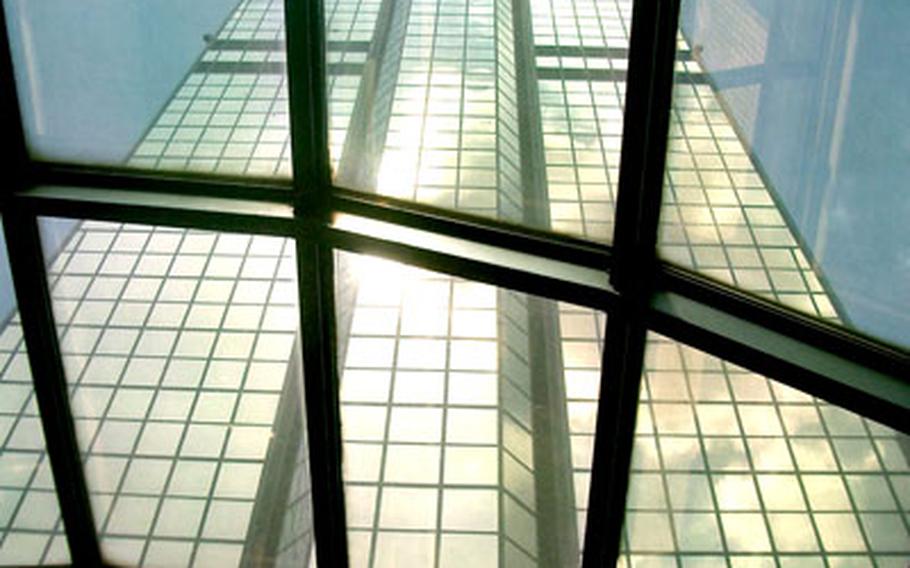 The view from the atrium of the 63 Building, the tallest in South Korea. The building, on Yeouido, contains shops, restaurants, an observation deck and, of course, an aquarium. (Joseph Giordono / S&S) 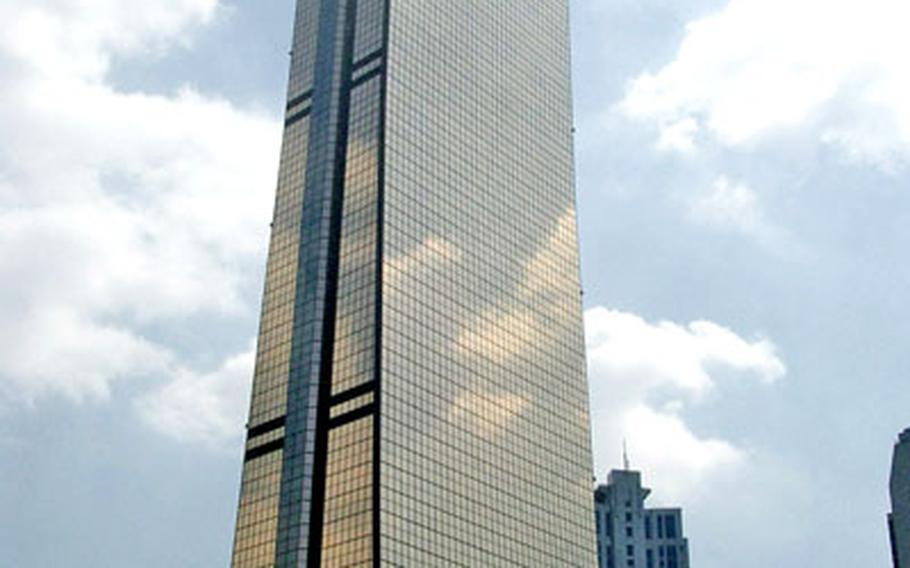 An exterior view of the 63 Building, the tallest in South Korea. (Joseph Giordono / S&S) 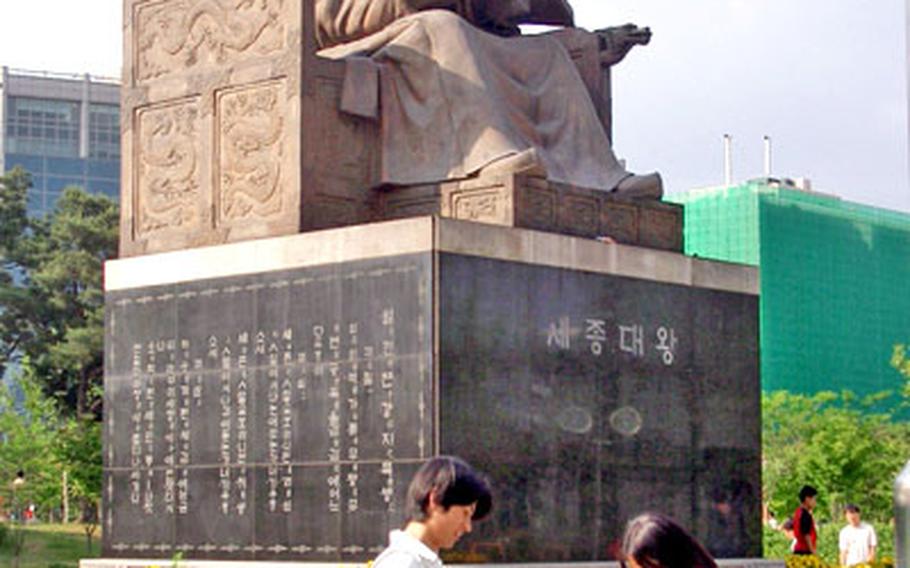 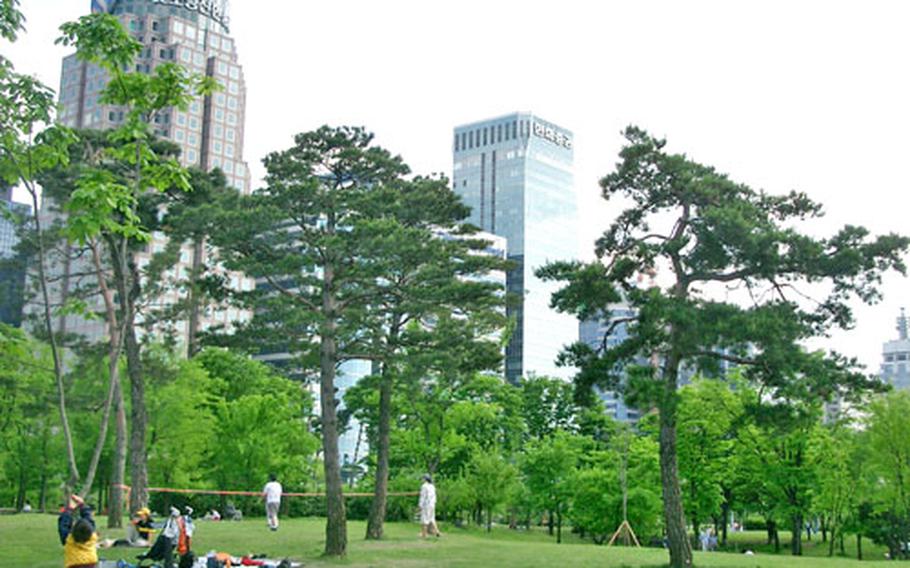 South Koreans like to call Yeouido the Manhattan of Seoul. And there are some similarities: Both areas are islands in the middle of huge cities, anchoring the skyscraper districts of Seoul and New York City, respectively.

Their images both grace countless skyline-at-night postcards; both are home to the business and financial centers of vibrant, exciting cities.

But that&#8217;s about where the comparisons end. It would take you a month to experience everything Manhattan has to offer, but Yeouido can be done in one long weekend day, depending on how much you want to see.

On weekdays, even at lunchtime, the streets of Yeouido are strangely deserted. Manhattan, as anyone who has been within smelling distance of Times Square knows, is exactly the opposite.

Come Sunday, though, if the weather is right, Yeouido breaks out. Thousands of Seoul residents flock to the area, carrying picnic lunches, fishing poles, bikes and in-line skates. There they find a combination of urban sight-seeing and riverside recreation.

People can drive and use the pay parking lots along the Han River, which bounds the kidney-shaped island of Yeouido on all sides, but the easiest way to get there is by subway. Two stops, Yeouido and Yeouinaru stations, are well within walking distance of everything there is to see.

If you like tall buildings and concrete canyons, the best place to start is the 63 Building, the tallest building in South Korea and sometimes known as the Golden Tower. That actually is a more accurate name, since the 63 refers to how many stories there are, even though the building actually is only 60 stories high. (Don&#8217;t ask.)

The outside of the gracefully sloped building is covered in gold-tinted glass, which can create some amazing visual effects when the sun rises and sets. Inside, there&#8217;s an IMAX theater, dozens of shops and restaurants, an observation deck and, naturally, an aquarium (like the COEX Mall, it seems the 63 Building wouldn&#8217;t be complete without an indoor aquarium and a seafood restaurant).

There&#8217;s a small fee for everything inside, ranging from about $5 for the IMAX films (currently one about elephants in Africa), to around $7 for the ride up glass elevators to the observation deck, to about $10-12 for the aquarium.

Nearby is LG Science Hall, housed in the LG Twin Tower (yes, its called Twin Tower, not Twin Towers. Again, don&#8217;t ask). On the third floor of the west tower, this interactive museum features a series of exhibits including a &#8220;strike oil&#8221; game and a robotics hall. There is no entry charge, but lines can be long and the Science Hall is closed on Sundays. English guides are available for large groups.

Also on Yeouido are the the headquarters of several newspapers and television stations and the South Korean National Assembly. (See the spot where two people immolated themselves in protests over the South Korean president&#8217;s impeachment earlier this year.)

But the real draws of Yeouido are the two parks that run along the Han River on the island&#8217;s north side. Hangang River Citizens&#8217; Park runs along the river, offering soccer fields, rose gardens, basketball courts and rentals for boating, fishing and water skiing.

There&#8217;s also a swimming pool, open in July and August. In the winter, the pool becomes an ice skating rink. In the remainder of the year, it&#8217;s a roller-rink and in-line skating park. Admission costs around $2 for the swimming/ice skating/ in-line skating area.

Also nearby is the ferry terminal, from which the Han River boat cruises depart. The most popular rides are at night, when the bridges and buildings light up.

During the day, you can rent a picnic spot along the river. For a couple of dollars, you&#8217;ll get a place on a mat with dozens of food and beverage vendors around. One thing you won&#8217;t find a lot of are garbage cans; be prepared to take your trash back to your car or to the subway station.

Running perpendicular to Hangang River park is Yeouido Park, Seoul&#8217;s answer to New York City&#8217;s Central Park. It&#8217;s not as big, but it&#8217;s a nice oasis of green in the city. On weekends, it&#8217;s also extremely popular with in-line skaters, who zip around a track along the perimeter. Inside, there are basketball courts, a cultural pavilion, an &#8220;ecological forest,&#8221; and The Grassy Field, which is exactly what its name says it is.

Also in the park is a giant statue of King Sejong, the most revered leader in old Korean history. A poet, musician and warrior, Sejong created Hangul, the Korean script that brought literacy to the Korean masses.

By car: Cross the Han River on the Mapo Bridge, veer parallel to the river, then choose one of several large pay parking lots.

By subway: Take Line 5 to either the Yeouinaru or Yeouido stations, then follow the signs to find what you want to see first.