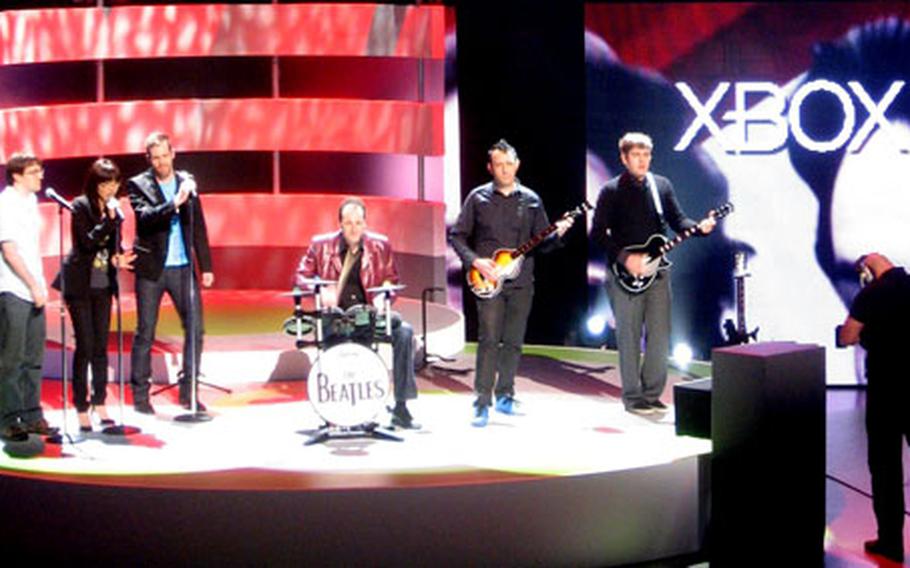 The "Harmonix House Band" uses plastic "Rock Band" controllers to perform the Beatles’ "Day Tripper," which will be part of "The Beatles Rock Band" when it is released later this year. The band performed at the Microsoft press briefing Monday at the Electronic Entertainment Expo in Los Angeles. (Brian Bowers / Stars and Stripes)

The idea behind Natal is that motion-sensing cameras and voice-recognition technology will turn the gamer into his own controller, possibly making games accessible to more people.

"The controller is a barrier separating video game players from everyone else," Mattrick said at the University of Southern California&#8217;s Galen Center.

Multiple buttons and knobs can be confusing to new gamers. However, in Natal, "we make you the controller," he said.

Full-body motion is required, unlike many Wii games. Or as creative director Kudo Tsunoda said, "This is not the kind of game where you sit on the sofa using preset waggle commands." Natal&#8217;s hardware &#8212; contained in a small rectangular gadget that will sit atop the TV &#8212; will be compatible with all versions of the Xbox 360. Mattrick didn&#8217;t offer a release date, but he said development kits are being released to game companies.

Microsoft invited filmmaker Steven Spielberg &#8212; who has worked on the "Boom Blox" games for the Wii &#8212; to emphasize the potential of Natal.

"The only way to bring interactive entertainment to everybody is to make the technology invisible," Spielberg said.

When he experienced Natal, Spielberg said, "The gamer in me went out of my mind."

Videos and live demonstrations featured people jumping, kicking, bending, flicking and flailing as they controlled onscreen actions, such as painting, exercising, fighting and interacting with a digital friend.

Of course it remains to be seen whether software developers can come up with content than can turn Natal into a truly revolutionary system instead of another gimmicky gadget. Much of the technology seems more evolutionary than revolutionary at first glance. Motion-sensing cameras were used in the old PlayStation Eye Toy and voice recognition has used quite effectively in last year&#8217;s "Tom Clancy&#8217;s EndWar."

In other announcements at the press briefing, skateboarding legend Tony Hawk offered another new take on controllers.

His upcoming "Tony Hawk Ride" boasts a controller that looks like a wheel-free skateboard. The gadget is packed with accelerometers and infrared sensors.

The show also featured a demonstration of Harmonix&#8217;s "The Beatles: Rock Band." The crowd was moderately impressed with graphics and new instrument-shaped controllers but enthusiastically rose to its feet when Paul McCartney and Ringo Starr took the stage to promote the game.

He then walked off with a few air guitar motions.

The biggest addition will be partnerships with Facebook and Twitter. The two versions of Facebook will be compatible and allow gamers to use their Xbox Live avatars.

In addition to these features, Xbox Live will add a music service, streamline the popular Netflix service and improve its video store by increasing shows&#8217; resolution and making it possible to watch them instantly, rather than waiting for them to download.