Where multi-course menus are holiday traditions 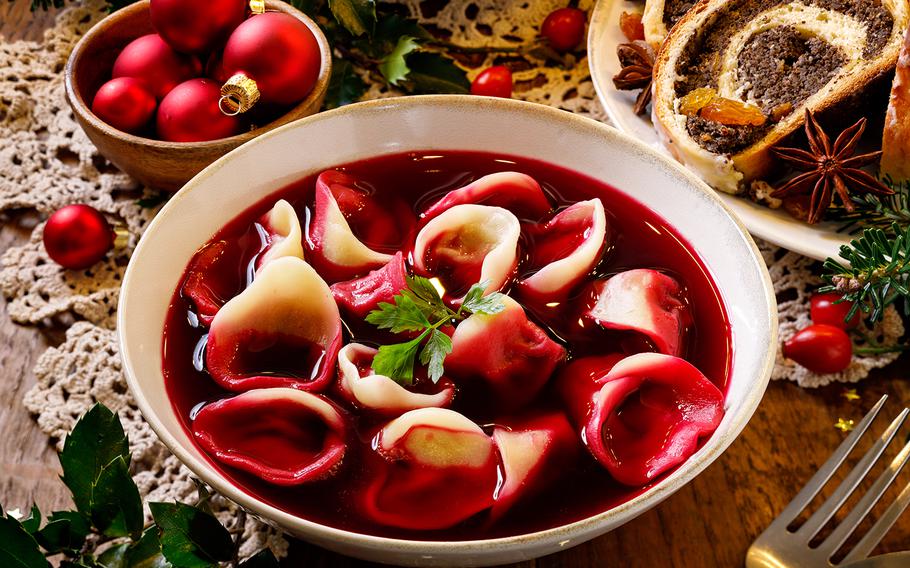 Traditional Christmas beetroot soup with small dumplings stuffed with mushrooms is the type of dish served in Poland to celebrate Wigilia. The feasting starts with the appearance of the first star. (iStock)

What’s on the plate for that special Christmas feast? It’s not just the country you find yourself in that determines the dish. Regions, religions and family traditions will influence what you’re indulging in the days leading up to, on and after the big day itself. One thing’s for sure, though: from fish to frikadeller, it’s bound to be a feast. If Santa can hit up multiple countries over the space of a single night, there’s no reason we can’t flit about Europe (virtually this year) sampling its best sweet and savory dishes over the festive period. Bib up and unbuckle; for ‘tis the season for indulging in many a memorable multi-course meal.

Julefrokost in DenmarkBefore the big day itself, Danes will gather with family and friends for the all-day eatathon known as a Julefrokost. This ultimate smorgasbord kicks off with fish dishes such as cold herring in various sauces, served with fried onion and capers. Next might come salmon and fried plaice with remoulade sauce. Meats typically include a creamy liver pate, served warm, pork with a crisp crackling and duck. A cheese plate and rice pudding finishes the feast. The drink of choice is Aquavit, a distilled spirit flavored with caraway. Expect multiple toasts of shot glasses brimming with the cold, potent tipple and be sure to make eye contact with all gathered round the table: failure to do so impacts negatively upon your love life for seven years!

Try for yourself: The Restaurant Kronborg is just one of dozens of Copenhagen establishments serving this holiday meal. restaurantkronborg.dk/en/

Wigilia in PolandIn Poland, Dec. 24 is a day for both fasting and feasting, and the time to dine comes only with the appearance of the first star. The supper begins with the communal breaking of the opłatek, a type of mild wafer, and exchanging well wishes. By tradition, 12 different dishes are brought to the table, the number symbolizing Jesus’ disciples and the months of the year. The one thing you won’t see at this meal is any kind of meat. Foods likely to make an appearance include beetroot and mushroom soups, a wheat berry pudding known as kutia, pickled herring, pierogi, red cabbage or sauerkraut, pasta with poppy seeds and krokiety, a small pancake. The main course will almost certainly be carp prepared several ways, and dessert is often poppy seed cake or a cheesecake. Traditional drinks include “compote” made of dried or smoked fruits such as plums, apples or pears, and honey infused vodka.

Try for yourself: Cafe Oranżeria, a rooftop restaurant above the Kossak Hotel in Krakow, serves Wigilia menus accompanied by spectacular views. http://cafeoranzeria.pl

The 13 Desserts of Provence, FranceOnce the Christmas dinner has been polished off, it’s time to head to France’s Provence region for some sweet treats. Les treize desserts de Noël are traditionally consumed late at night, following a light dinner and Midnight mass. The number 13 represents the 12 apostles and Christ himself, and it’s the number of dishes, rather than the type of dessert, that’s critical here. Depending on family traditions, the table might heave with calissons, a marzipan-like almond candy; nougat, in colors both black and white to symbolize good and evil, and gingerbread. Also common are the four beggars, representing monastic orders: figs for the Franciscans, almonds for the Carmelites, raisins for the Dominicans, and walnuts for the Augustines. Dates and fruits local to the region, such as clementines or melons, might well figure in, and the grand finale is often the Buche de Noël, or Christmas log. There’s no need to rush to clear the table— by tradition, these dishes should remain on the table for three days.

New Year’s Eve in RussiaThere’s one last extravaganza left to experience before the striking of the New Year. In Russia and other countries of the former Soviet Union, New Year’s Eve was the time for gathering to experience Christmas’s non-secular traditions such as decorated trees and exchanging gifts. Although the hosts have considerable leeway in determining what is brought to the table, a couple musts include Shuba, otherwise known as Herring in a Fur Coat, a salad of beets, potatoes, carrots, pickles and herring; and Olivier, a salad of potatoes, meat, carrots, peas, hard boiled eggs and lots of mayonnaise. Caviar, both red and black, is served atop generously buttered white bread. Pickled veggies and mandarin oranges add color to the table. The drinks of choice are Soviet Champagne and vodka, drunken neat and as part of countless toasts to the year that was and the one about to begin. May it be one to remember, and for all the right reasons!