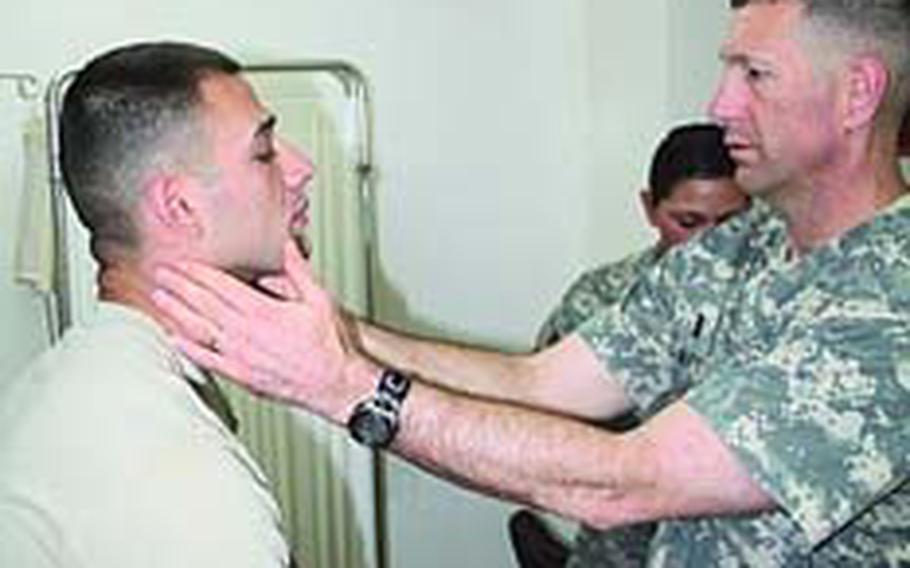 Editor&#8217;s note: Lt. Col. John Reynolds, commander of Task Force 2-28, was the only battalion commander from the 172nd who did not provide an interview to Stars and Stripes for the Welcome Home publication. The remarks by Reynolds in this article were made during an interview in June while he was deployed.

The civilians, who included experts from various U.S. government agencies such as the State Department, U.S. Agency for International Development and the Department of Agriculture, worked in provincial reconstruction teams.

Jeff Daigle, public diplomacy officer with the Babil PRT, which worked with 2-28 and was based in the town of Hillah, said in June that the PRTs&#8217; function was to assist with reconstruction of the provinces.

&#8220;They provide technical assistance and advice (to Iraqi authorities), use American aid money to fund projects and focus on governance, rule of law and economic development,&#8221; he said.

The Babil PRT included dozens of civilian personnel on one-year deployments and a handful of U.S. military staff. It was involved in projects ranging from building farmers markets to road construction, such as the refurbishment of the main street in the provincial capital of Hillah, Daigle said.

The PRT set up a pilot project to establish computer laboratories in primary schools, worked with beekeepers to process honey to international standards and brought 250,000 fingerling carp from Hungary to stock local fish farms, he said.

Reynolds, who has five university degrees and is as comfortable talking about black holes and time travel as he is discussing infantry tactics, set up task force headquarters at an old hotel in Hillah shared by the PRT.

The two provinces that Task Force 2-28 was &#8220;responsible&#8221; for used to fall under three brigades, he said during an interview in June.

The task force provided the PRTs with security when members moved throughout the provinces. It also provided them with links to the Iraqi security forces, he said.

Reconstruction projects were dictated by what Iraqi security leaders and the Iraqi government wanted, he said.

Task Force 2-28 included soldiers with civil affairs skills who could help with the sort of reconstruction projects that PRTs were involved in. Medical personnel assigned to the task force held clinics for their Iraqi counterparts, Reynolds said.

The work of the PRT paid dividends in improved security, he said.

Iraqis have dealt with Americans for more than five years, Reynolds added.

&#8220;The population here knows us. They understand our culture and we understand theirs,&#8221; he said.

Capt. Nicholas Sinclair, who commanded Company C, 2-28 in Iraq, said PRT projects were a big part of his mission near the town of Mahawil in Babil province.

All the PRT projects in the company&#8217;s area of operations involved soldiers from the unit, who ran missions to transport the PRT civilians to sites outside the wire, he said.

The projects were an important factor in security, added the 28-year-old East Point, Mich., native.

&#8220;When a school goes up or a market opens, the Iraqi people need to see that Captain Sinclair, Company C, 2-28, U.S. Army was instrumental in bringing us this. As long as the environment stays safe, you will see these projects,&#8221; Sinclair said in June.

When the 2-28 soldiers weren&#8217;t working with the PRTs they were training Iraqi security forces in places such as Karbala, one of Shiite Islam&#8217;s holiest cities.

Sgt. Raul Moncada, a Task Force 2-28 soldier, was killed in action April 13 in an explosively formed penetrator attack in Karbala.

First Lt. Sean Eidsness, of the 563rd Military Police Company, which fell under 2-28 in Karbala, said Moncada was one of several soldiers injured in the attack that took place as soldiers were heading to conduct training at a local police academy.

The soldiers were traveling in a heavily armored Mine Resistant Ambush Protected vehicle in a rural area surrounded by palm groves east of Karbala, said the 36-year-old Brookings, S.D., native, who was on the patrol.

The EFPs penetrated the thick armor of the MRAP and sent shrapnel ricocheting around inside shattering a female soldier&#8217;s hand and damaging one of her eyes. Shrapnel pelted other soldiers&#8217; backs and legs, leaving one of the wounded with a severe concussion, Eidsness said.

After the blast, Iraqis came out of nearby houses on both sides of the street to see what had happened, he said.