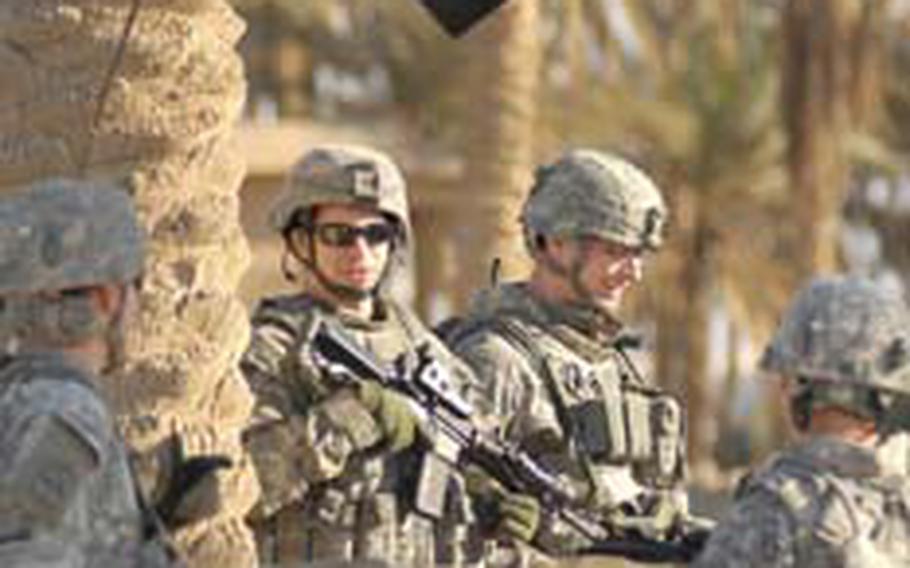 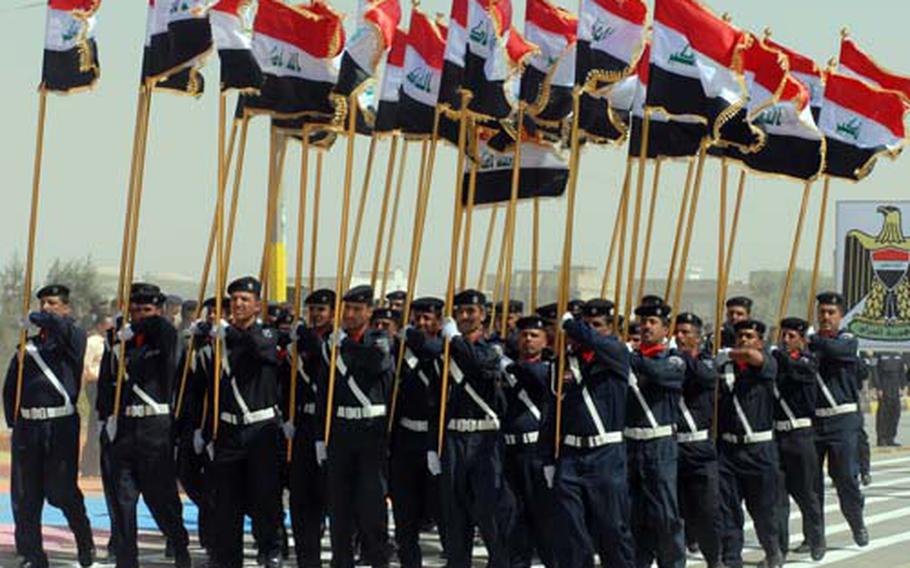 GRAFENW&#214;HR, Germany &#8212; Members of Task Force 1st Battalion, 2nd Infantry Regiment watched June 30 as thousands of Iraqi security personnel paraded through the city of Diwaniyah, Iraq, in a display that marked the handover of responsibility and symbolized the success of the task force&#8217;s mission.

The unit was tasked with training Iraqi forces, supporting provincial reconstruction teams and working with the &#8220;Sons of Iraq&#8221; program. It was a wide-ranging mission that had task force troops scattered around numerous bases.

Lt. Col. Steve Miska, the task force commander, said much of his unit spent the first few months of its one-year deployment working out of Forward Operating Base Iskan, a power plant turned military base in the town of Musayyib, in Babil province, south of Baghdad.

Other members of the battalion were based at nearby FOB Kalsu, and patrol bases were soon opened in the towns of Hamiyah and Mahawil, also in Babil. Soldiers at the patrol bases found themselves living alongside Iraqi soldiers, Miska said.

&#8220;The Hamiyah patrol base was especially important because it was in an area where some of the Sunni insurgency had been strongest,&#8221; he said.

Members of the task force spent a lot of time making sure that the &#8220;Sons of Iraq&#8221; program that employed Sunni tribesmen to guard checkpoints was integrated with Iraq&#8217;s conventional security forces, he said.

&#8220;When we packed up everything and left the FOB for the last time it was a good moment. People came out to the gate and waved goodbye,&#8221; he said.

In April, the task force took over two provinces &#8212; Diwaniyah and Najaf, which had been an entire brigade&#8217;s responsibility, Miska said.

In Najaf 1-2 soldiers at FOB Endeavor found themselves working alongside a newly arrived provincial reconstruction team of civilian experts who helped the Iraqis improve governance and develop economic projects, he said.

They also helped Iraqi security forces protect countless pilgrims traveling to one of the most holy cities in Shiite Islam, he said.

However, the relationship with the Iraqi police in Najaf was not entirely friendly. U.S. soldiers reported seeing police taking cover seconds before a roadside bomb detonated on the main road into town in May, striking a U.S. vehicle carrying Cpl. David A. Schaefer Jr., 27, of Belleville, Ill., who became 1-2&#8217;s first casualty of the deployment.

At the time, Miska said, the Najaf police were clearly implicated in the bombing.

FOB Echo in the city of Diwaniyah, where the battalion headquarters was located, was the target of regular rocket attacks by insurgents.

Another soldier assigned to the task force &#8212; Pfc. William Z. Van Osdol, 23, of Pinson, Ala. &#8212; was killed when a rocket struck his quarters in Diwaniyah in August.

Soldiers based in Diwaniyah supported another PRT operating in an area where agriculture is the most important industry, Miska said.

Soldiers there focused on protecting the PRT and training Iraqi soldiers and police officers, he said.

On June 30, which marked the pullout of U.S. combat troops from most Iraqi cities, Miska and a few others traveled to downtown Diwaniyah to observe the parade of Iraqi security forces.

Sgt. 1st Class Jose Voellm, 31, of Alametta, Calif., said the handover was the most significant event that he was part of during his time downrange.

&#8220;The [Iraqi police] and the [Iraqi army] have picked up the security mission. In [Operation Iraqi Freedom I], it was unstable and now they are pretty much stabilized,&#8221; he said.

Staff Sgt. Joshua Oliver, 27, of Chattanooga, Tenn., who has deployed to Iraq three times, said he noticed a big difference in the Iraqis&#8217; ability to provide for their own security.

&#8220;The first couple of tours here it was definitely a lot rougher out on the streets and now the Iraqis have a firm grip on security,&#8221; he said.

Second Lt. Kirill Tikhonenkov, 28, of New York City, said the Iraqis didn&#8217;t hesitate to assume responsibility for their own security after June 30.

&#8220;At the beginning we were in charge,&#8221; he said. &#8220;One morning we showed up and everything changed. The Iraqis led missions and were always successful and there was no hesitation. We were happy to see that.&#8221;

There was a lull in operations for the battalion in the aftermath of the handover, Miska said.

&#8220;It was important for the Iraqi public to see a move towards their sovereignty,&#8221; Miska said. &#8220;Right after the June 30 security agreement, it made a lot of sense to minimize our force signature off the FOBs. That was because we wanted the Iraqis to be in the lead. They quickly were in the lead and they rarely asked us for assistance.&#8221;

A mark of the task force&#8217;s success in Iraq was the recent peaceful transfer of power in provincial elections in Diwaniyah, Miska said.

&#8220;One party, which was primarily an Iranian-influenced party, handed power to another party,&#8221; he said. &#8220;That is something that probably wouldn&#8217;t have occurred without American soldiers here providing a stabilizing force &#8230; in a part of the world where that is pretty rare and power is generally transferred through violence and whoever has the biggest guns.&#8221;