Visitors can craft their own beer at Japan’s Kiuchi Brewery 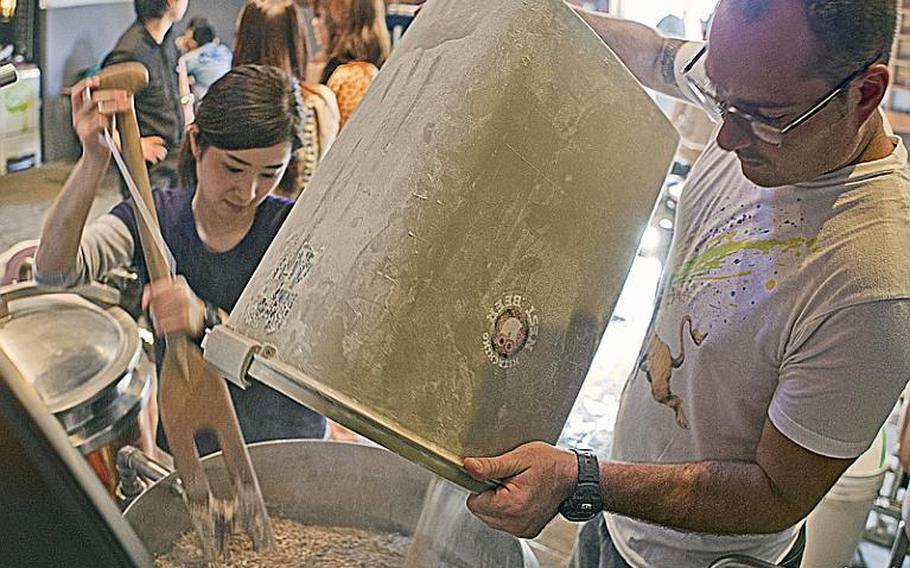 After measuring and milling the grains, we put them in a large stainless steel kettle to boil them and extract their sugars. (Nathan Bailey/Stars and Stripes)

After measuring and milling the grains, we put them in a large stainless steel kettle to boil them and extract their sugars. (Nathan Bailey/Stars and Stripes) 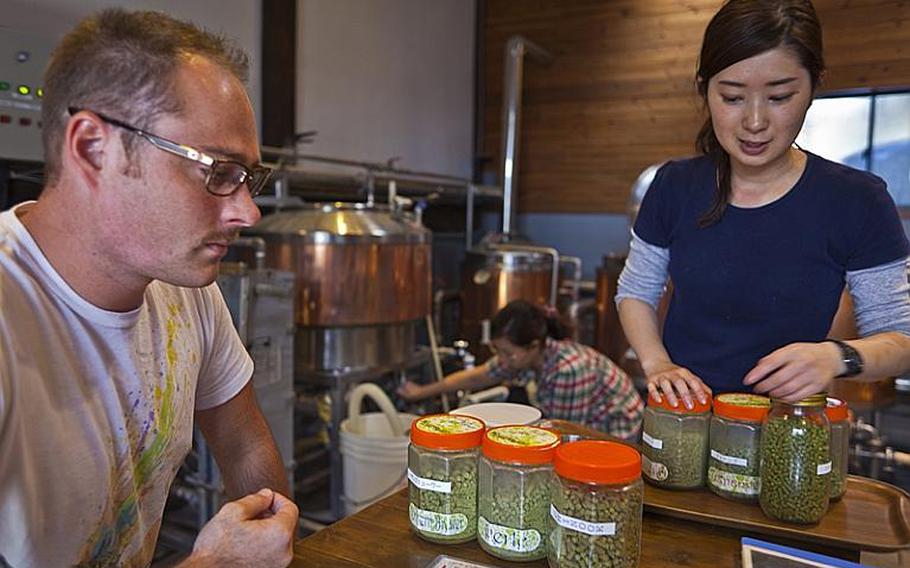 As we progressed in our beer customization, there were many different hops to choose from at Kiuchi Brewery in Naka, Japan. (Nathan Bailey/Stars and Stripes) Sake, Umeshu, Beer and Shochu made by Kiuchi Brewery were on sale at their store in Ibaraki. (Nathan Bailey/Stars and Stripes) The first step in the beer customization journey is choosing a base beer to start with. After tasting the stout, white ale, pale ale and amber ale, we decided the amber best fit our palate. (Nathan Bailey/Stars and Stripes) 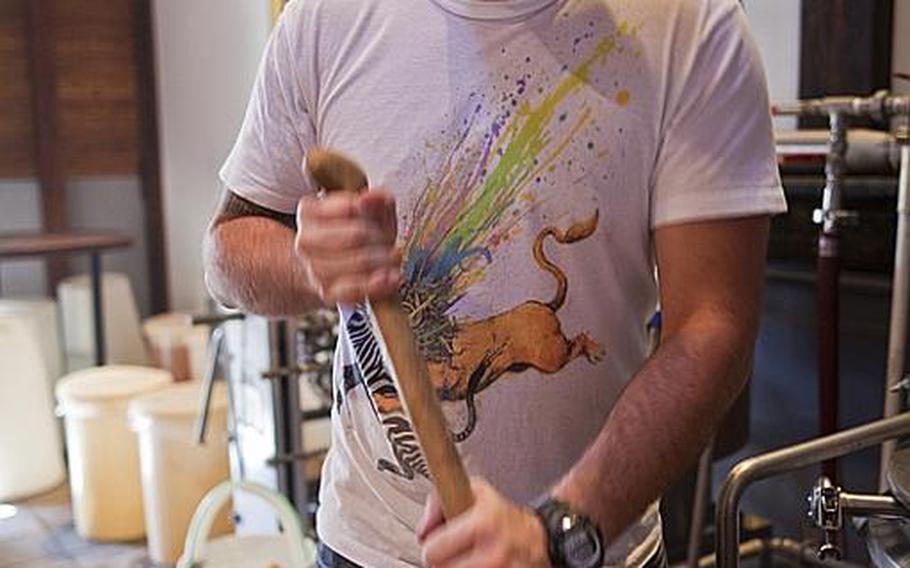 The milled grains had to be stirred until smooth, then boiled so they would release their sugars. (Nathan Bailey/Stars and Stripes) Measuring the grains was a simple process, but the amounts the recipe called for were very precise. (Nathan Bailey/Stars and Stripes) 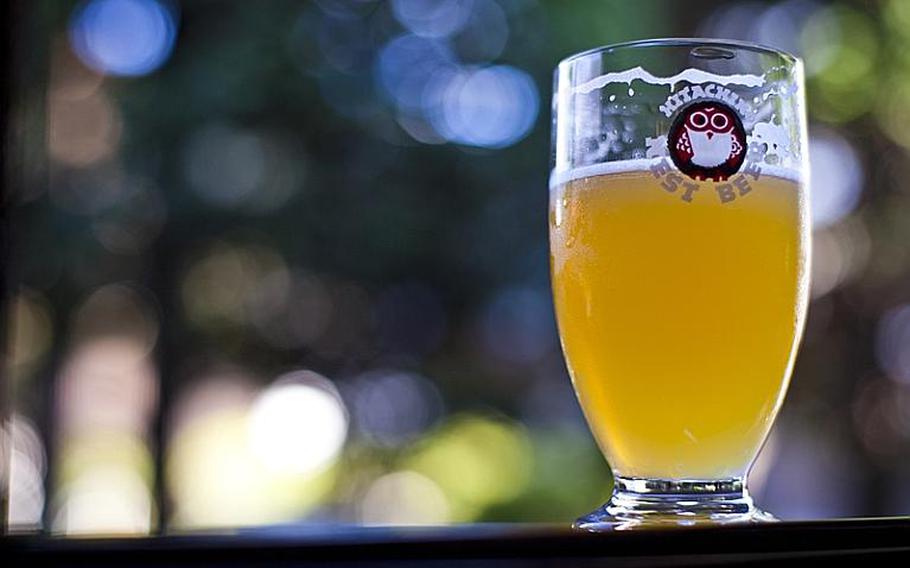 After spending the day brewing your beer, you can sample some of Kiuchi's own works at the bar on the premises. The white ale shown here is crisp and citrusy. (Nathan Bailey/Stars and Stripes)

Japanese breweries used to be required to produce at least two million liters of beer per year to get a license. But in 1994, the laws were relaxed and an era of craft beer began.

As an all-around beer snob, I had heard of Kiuchi Brewery in Ibaraki before coming to Japan because my local beer store carried Hitachino Nest Beer, its signature brew.

What I didn&rsquo;t know was that I could gather up my friends, drive to Ibaraki and brew my own beer in the brewery&rsquo;s equipment.

After reading this wonderful news on the Kiuchi Brewery&rsquo;s website, I grabbed the two nearest people and informed them that they were coming with me to brew beer.

We arrived at the brewery just after noon and were surprised to discover much more than a brewery. The whole compound is made up of traditional Japanese-style buildings housing a host of attractions.

In the front of the compound, there is a shop where you can buy a variety of Japanese fermented or distilled beverages that are made on the premises, including vinegar. Next to the shop was a bar, serving a few of the brewery&rsquo;s popular beers on tap. We had a few minutes before we were scheduled to brew, so we had a pint. It was already turning out to be a good day.

Soon they called our group, and we entered the brewing room. Our brewmaster sat us at a picnic table and brought us more beer. She asked us to taste all of their standard brews and choose one to use as a base for our own beer.

We chose an amber ale and increased the alcohol content by adding more sugar, in the form of grain, for fermentation. We also increased the amount of hops added to bring up the bitterness and add more flavor.

The whole process took about four hours and we did all the important things ourselves. We measured out the grain, milled it, threw it in a pot and boiled it. There were even tasks &mdash; as our brewmaster warned us &mdash; that, if done incorrectly, would allow bacteria to contaminate our beer.

In the Kiuchi complex is a restaurant that will serve you noodles while you brew. This is a clever idea because we had to wait about 45 minutes for the beer to finish boiling. We didn&rsquo;t eat there, however. Instead, we went back to the bar and had another pint.

After we had finished brewing, our brewmaster arranged for the delivery of our bottles. The beer would ferment in the brewery&rsquo;s storage area and when it was ready, they would bottle it and send it to our houses. They even let us design our own label, which they will print and ship along with the bottles. That process takes about six weeks.

We had a great time and the long drive was worth it, especially since we had a designated driver.

The only downside is that no one at Kiuchi Brewery speaks English. So if you decide to go, bring a translator.

It costs around $235 to make 15 liters of beer (around 45 bottles), and they&rsquo;ll deliver anywhere in Japan for free.

If you like beer or sake &mdash; or just like fun day-trips &mdash; I give Kiuchi Brewery my greatest endorsement. Not only did I learn about how beer is made, I got to experience some local culture first-hand.