VIsiting your spouse during R&R: Just do it 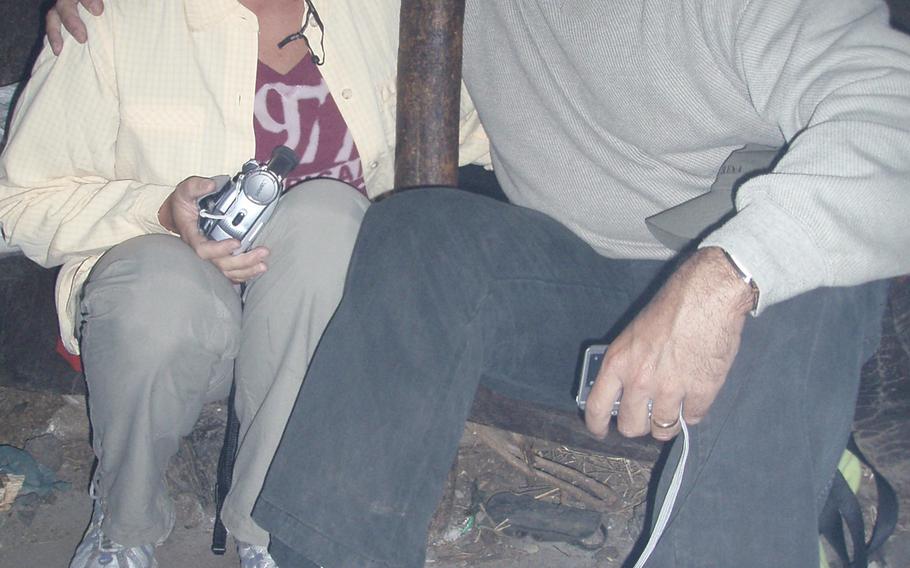 Columnist Lisa Smith Molinari crouches in a smoke-filled Masai dung hut in Tanzania with her husband, Francis, while he was on R&R during his yearlong deployment to the Joint Task Force, Horn of Africa in 2007. (Courtesy of Lisa Smith Molinari)

“There’s no way I can go to Africa,” I told my husband, Francis, over a bad Skype connection. He was halfway through a year-long deployment to Djibouti, East Africa, and wanted me to meet him during his R&R for a Tanzanian safari.

I sighed heavily, thinking of all the reasons why I couldn’t go.

Add Hayden’s speech therapy twice a week, Boy Scouts on Monday nights and piano lessons for all three kids on Wednesdays, and our schedule was a logistical nightmare.

Dinghy, our 110-pound Labradoodle, was sweet, but he had recently been dropped by his normal dog sitter because she had to chase him around her kitchen when he ran off with an entire rotisserie chicken he stole from the counter. Where would Dinghy go if I went to Africa?

Plus, I would need shots for typhoid, yellow fever, cholera, hepatitis A and B, rabies, meningitis, tetanus, diphtheria, measles and influenza; and pills for malaria. When would I have the time for all those clinic visits?

Furthermore, our circa 1981 house had a lot of quirks. The original Florida heat pump sputtered away, despite being several years past its recommended lifespan. What if it finally gave up the ghost? I had jury-rigged the refrigerator’s ice maker after it broke. What if someone else wouldn’t know how to make it work? I babied our fragile garbage disposal. What if someone let a spoon slip down the drain? What if someone didn’t know how to get the toilet tank flapper to seal like I do?

Even if I solved all the “what ifs,” there was still the problem of our budget. We didn’t have funds for a trip to a Motor Lodge in Schenectady, much less an African safari.

Surely, meeting Francis for his R&R was an impossible dream.

But suddenly, there I was. In row 53 on a flight to Kilimanjaro International Airport to meet Francis.

It was something Francis had said. “Once-in-a-life-time chance …” had rattled in my brain, eventually giving way to the adage, “Where there’s a will, there’s a way.”

My mother traveled to our house to watch the kids for 10 days. Friends and neighbors helped with car pools, practices, grass cutting and dog walking. I received 14 shots and popped my malaria pills. Flights were booked, safari excursions were chosen, and a new credit card was procured to pay for it all.

After reuniting in Kilimanjaro, Francis and I spent the night under a mosquito-netted bed in a tiny coffee plantation cottage, where kittens mewed from their nest in the thatched roof. In the days that followed, we traveled with our guide, staying overnight in rustic tented camps. We watched elephants and leopards in Tarangire National Park. We spied rhinos and flamingos in Ngorongoro Crater. We squatted in a smoky dung hut with a Masai tribal chief. We gazed at wild animals and incredible sunsets in the Serengeti. We visited a dirt-floor orphanage to play with children and make a donation.

The impossible dream had become a reality, and surprisingly, our household did not fall apart. Not only did we recharge our deployment batteries, reuniting with my husband allowed me to share in his military adventure.

Although I try not to think about how much interest we accrued on that credit card debt, the trip to see my husband was, quite simply, worth every cent.