Unveiling the mysteries of sticky rice Japanese rice is sticky, fluffy and moist, which makes it easy to eat with chopsticks. (Jason Carter / S&S)

Japanese rice is sticky, fluffy and moist, which makes it easy to eat with chopsticks. (Jason Carter / S&S) 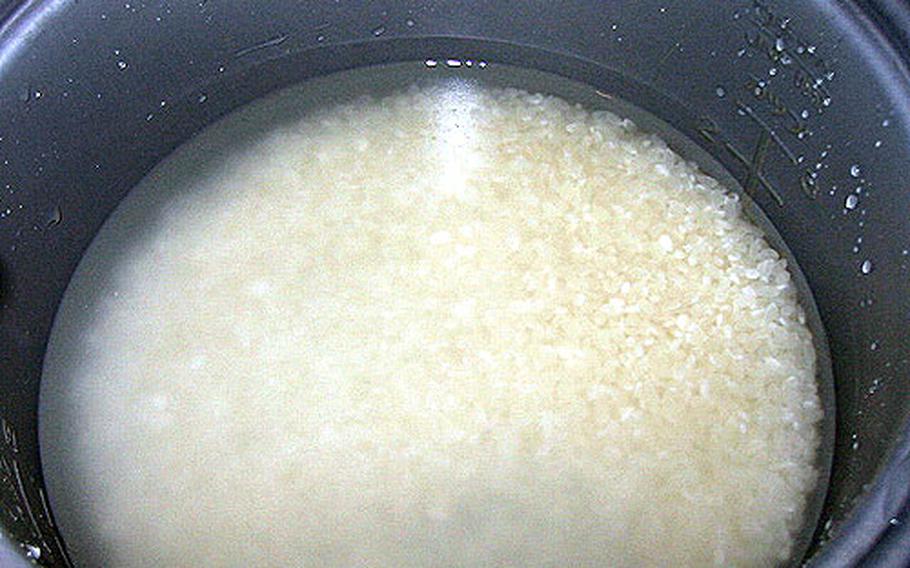 CAMP ZAMA, Japan &#8212; This is a country that could not survive a day without a bowl of rice.

It&#8217;s there at dinner. At lunch. When it arrives after a long line of courses, like a gong, it signals the end of the meal.

Whatever rice you knew before Asia, it&#8217;s probably a little different than the wet, sticky stuff that clings to the ends of your chopsticks and is served at every dinner table throughout Asia.

&#8220;We had Minute rice about once every two weeks. It was horrible, dry, not sticky. To me it doesn&#8217;t have much flavor,&#8221; said Darlene Seidel of her childhood rice memories in Edmonton, Canada. Now her family of six typically goes through a 20-cup rice cooker of Japanese rice about every two to three days.

Beth Schimmel knew little about sticky rice before her family&#8217;s arrival to Camp Zama a year and a half ago.

&#8220;I just knew regular American rice. And that brown rice is healthier,&#8221; said Beth Schimmel, who originally hails from Oklahoma.

Yet even after a year and a half in Japan, Schimmel still considers herself &#8220;rice-handicapped&#8221; when it comes to preparing rice like the Japanese do.

&#8220;My boys say they like the Japanese rice better. When we go to restaurants, it&#8217;s fuller, better. Mine is harder and firmer. The boys like it stickier and softer,&#8221; Schimmel said.

And why in Japan, where no meal is complete without it, is the price of rice so high? Will forking out four times as much for rice on the economy take you across a threshold of rice appreciation from which there is no return?

The price of rice

A recent visit to a local rice vendor in Sagamihara, Japan, that sells primarily 5- and 10-kilograms bags of rice revealed prices that would send most commissary shoppers into sticker shock.

Judging from price alone, you might gather that Japanese rice is in a different league from its American counterpart. But according to the Web site of the California Rice Commission, rice grown in Japan and California are not all that much different.

&#8220;Japonica&#8221; rice, found in temperate climates such as Japan, Korea, northern China, Italy and Spain, is a short, rounded grain that becomes sticky when cooked. This is the rice you find when shopping on the economy.

Calrose rice, which comprises 95 percent of the rice grown in California, is a somewhat elongated medium-grain Japonica sub-species. It also tends to become sticky in the cooking process.

The longer grain rice that does not stick together when cooked is a variety known as &#8220;Indica.&#8221; It grows in sub-tropical climates such as India, Thailand, Philippines and the southern United States.

Poksun Sciria, a native of Korea, has lived in the States and currently resides in Camp Zama&#8217;s Sagami Depot in Japan. She said there are distinct differences between rice. She has bought rice on the economy but chooses the rice at the commissary because it is a good value.

&#8220;American rice is long grain, not sticky. It goes well in fried rice or pilaf. Korean and Japanese rice is almost the same, but I can tell Japanese rice. It&#8217;s very fresh and sweet and good for sushi, which means it&#8217;s very sticky,&#8221; Sciria said.

Lily Li grew up in China where long grain &#8220;Indica&#8221; rice was what she ate every day. She has purchased Thai rice and California rice from the commissary.

&#8220;The real Chinese rice is shaped almost like Diamond G and is not sticky and has no smell like the rice from Thailand &#8212; it&#8217;s between those two kinds. Diamond G is almost the same, a little bit more sticky than Chinese rice. Other than that, everything else is the same,&#8221; Li said.

She doesn&#8217;t believe there&#8217;s a big difference between certain brands of California rice sold in the commissary and Japanese rice available on the economy.

&#8220;One of my students was bringing rice that her father grew so I got to try the Japanese rice. The rice she brought was new rice, so it was much better because it was whiter and just fluffier. But when you go to the restaurants I don&#8217;t see that much difference between the high-grade rice that we buy and the Japanese rice,&#8221; Kekaula said.

The price of rice on the Japanese economy is surprisingly high when you figure that it is the American equivalent of potatoes, pasta or bread.

The variation in price depends on where the rice is grown, how recently it was harvested and whether it has been mixed with rice from other sources.

The most expensive rice you can buy is 100 percent new rice from Uonoma, a region in the northern prefecture of Nigata, for about 4,680 yen for 8 killigrams (about $2.22 per pound).

Seidel also prefers and purchases rice in Japanese rice stores but has found a way to reduce her costs.

A bag of Nishiki rice from the commissary mixed with a bag of Japanese rice helps to cut costs while maintaining the taste, she said.

Another cost-cutting trick is to mix an 8 ounce bag of Japanese sweetened mochi rice (about 73 cents at the commissary) in with 20 pounds of California-grown rice.

Hoch, a Japanese-English translator by profession, takes cues from a Sagamihara rice vendor about the importance of cooking technique.

She said more or less water or the addition of a little cooking oil can improve taste and texture, depending on the quality and grade of rice being bought.

For example, &#8220;shin&#8221; rice &#8212; new rice harvested and sold in the fall months &#8212; needs less cooking water because it has more moisture than rice that&#8217;s been sitting on the shelves for a year or more. She recommended filling water up to the appropriate line on your rice cooker and then removing a few teaspoons of water so the new rice does not become too mushy with cooking.

If you don&#8217;t have a rice cooker, place your hand palm-down on top of the uncooked rice and add water to the height of your wrist bone.

The size of the pot may affect results, of course, and you may need to adjust the amount of water.

In either case, rice should be rinsed and allowed to soak in water for about 30 minutes prior to cooking.

When cooking rice in a pot over a stove-top burner, bring both rice and water to a boil in the pot, then cover and reduce to a low heat. For the next 20 minutes, do not remove the cover, stir or otherwise disturb its contents while the rice cooks.

Storing uncooked rice is another important factor, and she suggested an airtight plastic container or, better yet, keeping rice in the refrigerator to retain freshness.

Leftover rice should not be left out for more than an hour after cooking. Freeze portions of leftover rice in Saran Wrap, she advised. When needed, the packets can go from freezer to microwave. Rice stored this way can last up to a month.

Another good use of leftover rice is fried rice. Quick and easy, it uses up leftover rice, veggies and meat. Though the Chinese typically use long grain unsticky rice, sticky rice tends to dry out in the refrigerator and is a suitable ingredient in this recipe.

Salt and pepper to taste

Heat oil in a large skillet over medium heat. Add veggies and saut&#233; two to three minutes. Add meat and 2 tablespoons soy sauce and stir-fry for another two to three minutes. Add rice and continue stir-frying, adding remaining soy sauce a little at a time so it is absorbed into the rice. When rice is thoroughly heated, make a well in the middle and pour in beaten eggs.

Stir-fry until eggs are blended into rice, about three minutes. Add salt and pepper to taste.

Note: This recipe may be prepared in advance and reheated. Vegetables such as frozen green peas or cubed carrots; canned corn, bamboo shoots or water chestnuts, etc., may be substituted.