Travel highlights in Europe for 2019 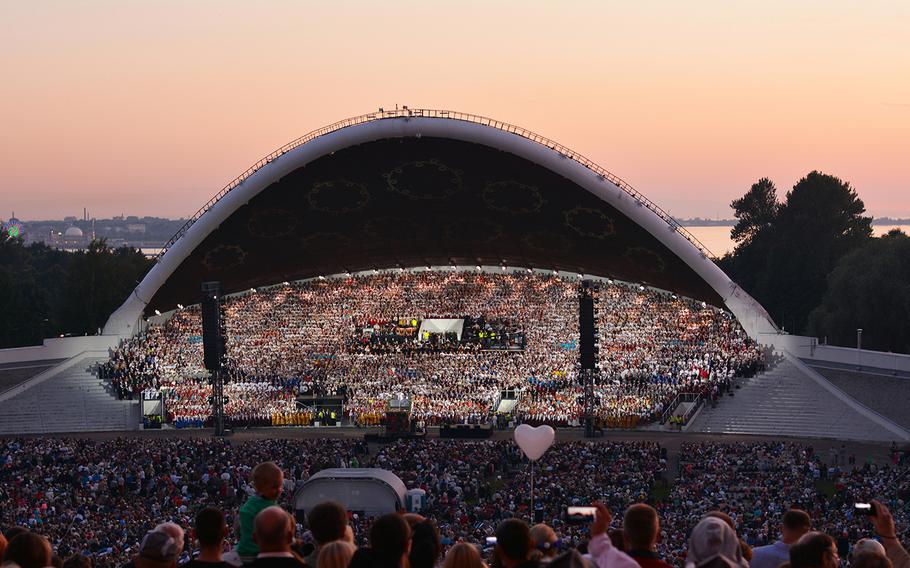 Tens of thousands sing at the Estonian Song Festival, which takes place once every five years. It’s scheduled to happen July 4-7. (Courtesy of Wikipedia Commons)

Was your New Year’s resolution to take advantage of your time stationed in Europe by traveling around the continent as much as possible? You’re in luck, as the year 2019 is shaping up to be yet another great one for tourism, with a slew of anniversary celebrations, grand openings, themed years as dubbed by national tourist boards and more.

To whet your travel appetite, we’ve prepared this overview of the bill of fare that’s being served up throughout the year.

AustriaOn the occasion of the 500th anniversary of the death Emperor Maximilian I, the State of Tyrol has declared the year 2019 the Year of Maximilian. Under Maximilian I, referred to as “The Last Knight,” a whole new dimension of European culture and politics arose, with the city of Innsbruck the seat of the House of Habsburg and magnet to numerous important artists. The yearlong program put together by the State of Tyrol and the City of Innsbruck encompasses events of both an educational and cultural nature, along with a side program eyeballing not just the past but present times and the future.Online:maximilian2019.tirol

Should you have missed the celebrations surrounding the 200th anniversary of the Christmas carol “Silent Night” in 2018, a special exhibition at the Salzburg Museum titled “Silent Night 200 – History. Message. Present.” remains in place through Feb. 3.Online:salzburgmuseum.at

BelgiumBrussels is gearing up to host The Tour de France’s Grand Depart this year with a special program of events slated for July 1-7. While race participants have pedaled the streets of Belgium 47 times previously, the last time The Tour kicked off in Brussels was 1958. Look for activities spotlighting the city’s cycling culture and the legendary athletes who’ve hailed from Belgium, not least Eddy Merckx, who wore the Yellow Jersey 111 times, a record that holds to date. The yellow jersey itself is marking a round 100 years since its debut at Le Tour.Online:brusselsgranddepart.com/letour/en

Elsewhere, Antwerp Zoo, one of the oldest and most famous zoological gardens in Europe, celebrates its 175th anniversary with a special exhibition showing how it got through the First World War, live bands on the Flamingo Plaza in summer, and its annual winter illuminations known as China Light ZOO.Online: visitantwerpen.be/en/175-jaar-zoo-antwerpen

BulgariaPlovdiv is the first Bulgarian city chosen to be European Capital of Culture. Bulgaria’s second-largest city opens its year in the spotlight on Jan. 12 with a grand show of music, light and dance titled “We Are All Colors,” followed by a year of programming organized under the pillars of “Fuse,” “Revive,” “Relax” and “Transform.”Online:plovdiv2019.eu/bg

CroatiaA boost to Croatia’s reputation as a vacation paradise is sure to come through two mentions by the top echelons of the travel press. Lonely Planet has named the city of Zadar as one of its top ten city destinations in 2019, while Fodor’s Travel has singled out the country’s national parks as must-visit destinations this year.

DenmarkThe Danes see their flag as much more than a symbol of national pride, happily flying their beloved “Dannebrog” on occasions such as birthdays or the return of a loved one at the airport arrivals gate. Denmark’s flag dates back to 1219, making it quite possibly the oldest in the world. Its 800-year anniversary celebrations have yet to be unveiled, but promise to be special.

Other big-deal happenings in Denmark include the springtime opening of a huge new castle-themed hotel at LEGOLAND (the Danes invented Lego, by the way) in Billund; a new observation tower at the country’s largest treetop adventure park, the Camp Adventure Park in Haslev; and the opening of CopenHill, an artificial, year-round ski slope and recreational hiking area built atop Copenhagen’s waste-to-energy resource center.Online:visitdenmark.com/denmark/top-events-denmark-2019

EnglandChiswick House & Gardens, made up of a Palladian villa and an early, exquisite English landscape garden, are located in Chiswick, Middlesex, just west of London. Debuting in 2019 is an event titled “Pub in the Park,” a celebration of food and music with a lineup of acclaimed chefs and their signature tasting dishes paired with great live music. The festival takes place Sept. 6-9, but to secure tickets, sign up to the event newsletter for access to pre-sale tickets when they go online Jan. 31.Online:chiswickhouseandgardens.org.uk/whats-on

EstoniaThe Estonian Song Festival, one of the largest amateur choral events in the world, is inscribed on UNESCO’s list as a Masterpiece of the Oral and Intangible Heritage of Humanity. The festival, held on the Tallinn Song Festival Grounds just once every five years, features joint performances of choirs,with up to 30,000 singers performing at once. The XXVII Estonian Song Celebration will run July 4-7 under the motto of “My Fatherland is my Love.”

FranceThe Loire Valley is the site of a vast fete in honor of the 500th anniversary of the Renaissance, a fortunate byproduct of territorial disputes that saw Italian ideas and influences take root in French soil. The year 1519 was a big one for the area, with momentous happenings such as the laying of the cornerstone for Francois I’s over-the-top pleasure palace, the Chateau de Chambord, the death of Italian artist and inventor Leonardo da Vinci, who spent his final years at the Chateau du Clos Luce near Amboise, and the birth of Catherine de’ Medici, a key influencer behind the building of new chateaux and the flamboyant Renaissance makeovers given to existing ones. Anniversary events include the exhibition “Children in the Renaissance” at the Chateau de Blois May 25-Sept. 1, an exhibition examining the myths surrounding da Vinci’s death at the Chateau d’Amboise May 2-Sept. 2, a Medici Codex concert (June 15) and a Grand Renaissance Ball (July 25).Online:tinyurl.com/ybwj5fd2

The Bauhaus movement, an attempt to bridge the gap between art and industry by combining fine arts with crafts, celebrates its centenary under the motto “Reinventing the World.” Its highlight event will be the opening of the Bauhaus Museum Weimar, slated for April 6.Online: bauhaus.de

A big bash to celebrate the fall of the wall takes place at Berlin’s Mercedes-Benz Arena on Oct. 3, where some of the biggest names from ’80s and ’90s music, to include DJ Otzi, Boney M. and other stars, will rock the stage.Online: tinyurl.com/ya265uxc

ItalyThe city of Matera is one of the two European Capitals of Culture in 2019. Matera enjoys UNESCO World Heritage status in large part due to its Sassi, cave dwellings carved into a gorge. Its unique setting makes it a popular choice for movie sets. To open a year’s worth of festivities, an opening ceremony scheduled for Jan. 19 will feature marching bands from 27 other European Capitals of Culture performing in a converted quarry.Online:materaevents.it

IrelandWith the final series of Game of Thrones to air this spring, Tourism Ireland plans to maximize its connection to the smash hit by proposing travel itineraries promoting Northern Ireland as “Game of Thrones Territory.”Online:tinyurl.com/yap6mvmd

SpainA program titled “Sevilla 2019-2022” celebrates the 500th anniversary of the first circumnavigation of the Earth. It seeks to shed light on the explorers behind the big deed and its importance on the world stage. The three-year length of its program mirrors the time it took to complete the Magella-Elcano voyage.Online:tinyurl.com/y98sxp8j

United KingdomThe Royal Collection Trust, the art collection of the British Royal Family and the world’s largest private art collection, is spread among 13 historic royal residences in the United Kingdom including those in the Buckingham Palace, Clarence House, Windsor Castle, Frogmore House and Holyroodhouse. An exhibition titled “Leonardo Da Vinci: A Life In Drawing” will run simultaneously in 12 cities between Feb. 1 and May 6; in the sum-mer, all these drawings will be brought together into a single exhibition at The Queen’s Gallery in London May 24-Oct. 13, followed by an appearance of these works at The Queen’s Gallery in Edinburgh in the winter of 2019-2020.Online:tinyurl.com/y8g2svdv