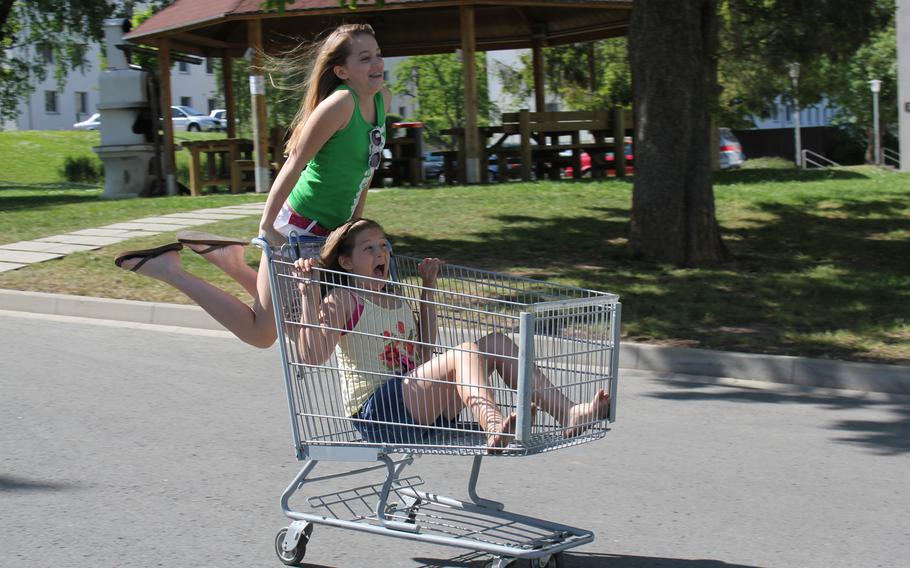 Lisa Smith Molinari's daughters, Anna and Lilly, ride on an abandoned shopping cart when the family was stationed at Patch Barracks in Stuttgart, Germany, in the summer of 2010. (Courtesy of Lisa Smith Molinari)

You can call me Parent of the Year. I just gave my 17-year-old daughter permission to go cliff diving with her friends at a rocky outcrop overlooking the bay.

As counterintuitive as this might seem for a parent, I smile when my children seek out the kind of old-fashioned, risky fun I had when I was a kid. Back before the internet made screens our main focus in life, we spent summers trying to figure out what to do for entertainment. Swimming holes, rope swings, junkyards and bridges were hot spots, but in a pinch, abandoned shopping carts, appliance boxes and other household objects would also do the trick.

One summer in the 1970s, my older brother scored two large inner tubes. He called his friend, Tracy, to come over to help him figure out what to do with them. Tray was in junior high school and wanted nothing to do with little sisters like me. So, I trotted barefoot up the hill to the neighbor’s backyard playhouse, picking newly-sprouted dandelions along the way.

About an hour later, there was a knock at the playhouse door.

“Hey, Lisa! Come here! Wanna do something fun with me and Tracy?!”

Flabbergasted by this unusual turn of events, I threw the baby doll I was nurturing into the spider-webbed corner and ran out the door. “Whaddya wanna do?!” I yelled excitedly.

Tracy and Tray lead me to the side of the neighbors’ house where I saw the inner tubes lashed together, side by side, with twine. Grinning sideways at each other and down at me, my brother said, “Lisa, if you climb inside the tubes, we’ll roll you down the hill and it’ll be really fun!”

I couldn’t see red flags or hear alarm bells. All I knew is that my big brother finally wanted to play with me.

I crouched down and climbed into the center hole, gripping the metal valves like handles just as they instructed. With my chin on my chest and my legs criss-crossed, I fit snugly into the tiny space. Assuring me that the ride would be better than the Scrambler at the county fair, they shoved me off down the hill.

As the tubes took their first few rotations, I squealed with excitement. But then, I reached the dropoff at the front of the neighbors’ property, and the cylinder spun wildly with the sudden acceleration. The natural undulations of the lawn sent the tubes airborne, causing them to change shape as they bounced on the ground. The circle distorted into an elongated oval with each impact, and my teeth clacked.

As the contraption flew down the hill toward a border of blue spruces, my initial squeals of delight turned into breathy screams of terror, and then into the silence of survival mode. From my cramped vantage point, I could see flashes of blue sky, the approaching spruces, grass, and Tray and Tracy screaming down the hill after me.

I knew I had to save myself from certain disaster. As I slammed into the ground after a particularly high bounce, I allowed my foot to pop out of the ring. My toes immediately caught the grass, flipping the tubes like a quarter in a coin toss.

My wheel of terror teetered to a stop just before the spruces, and I burst out of the confining hole onto the grass. The entire universe spun around me. I could hear faint yelling coming closer, until Tracy’s silhouette appeared against the blue sky above me.

“Lisa! Lisa! Are you okay?!” Tracy panted, as a drop of spit began to ooze from his gaping mouth. Just before the elongating globule could detach itself, Tracy slurped and swallowed in the nick of time.

As the summers passed, my brother continued to bait me into painful judo flips, terrifying locked closets and harebrained schemes, and I also found plenty of trouble all on my own. And now, as my teenage daughter goes to jump off cliffs, I say a little prayer that no one breaks an arm, I accept the natural order of the world, and I understand that some things never change.