Tokyo: Try a maid cafe for a night of clean fun and games Tim Boisvert watches as a maid presses down on a plastic alligator&#39;s tooth during their Russian roulette-like duel. (Tim Wightman/Stars and Stripes)

Tim Boisvert watches as a maid presses down on a plastic alligator&#39;s tooth during their Russian roulette-like duel. (Tim Wightman/Stars and Stripes) 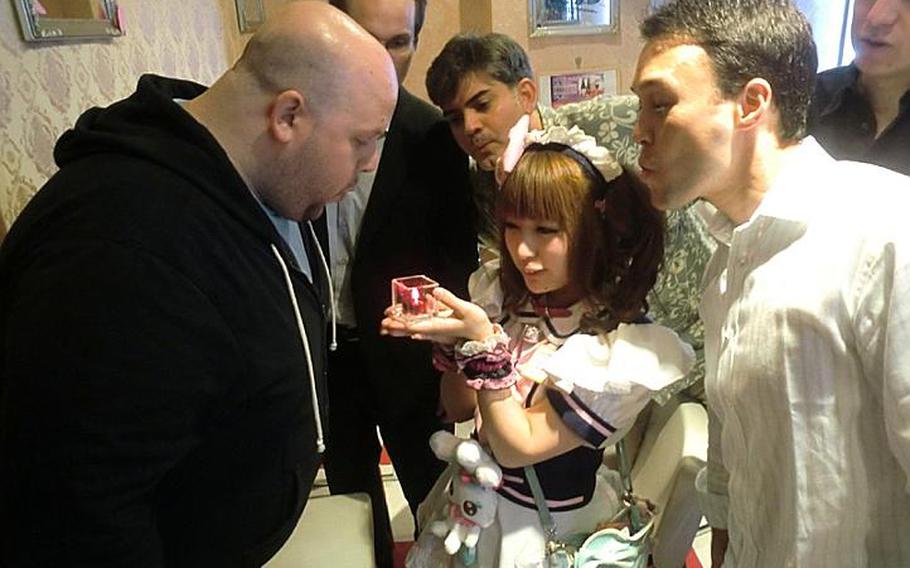 The prospect of finding an acceptable venue for a religious man&#8217;s bachelor party is what led a group of six 30-somethings to Tokyo&#8217;s electronics district one Friday night.

No doubt, you see a lot of strange stuff in Akihabara. So when you see a young Japanese woman dressed in a French maid costume, you hardly give it a second thought &#8212; unless your initial thought was to find one and have her lead you to a maid cafe.

It&#8217;s in such a cafe that we placed our hopes for some good, clean (the operative word) fun. In doing the necessary Internet research beforehand, I learned some things to help me prepare:

&#8226; Maids would likely decorate your food upon its arrival at your table.

Bring it on. It all sounded good.

It didn&#8217;t take long before we found a maid with brochures in hand standing on the sidewalk off one of Aki&#8217;s back streets trying to pitch her particular establishment. The Japanese speakers in our group spent a couple of minutes going over with her such details as prices and cafe closing time. We were soon following her to the cafe, which was about two blocks away. There was mild chatter among us about feeling like dirty old men, but not quite enough to dissuade us.

When we got to the cafe, called &#8220;Mai Dreamin,&#8221; on the third floor of a shared building, I found it to be a lot brighter and spunkier than what I was led to believe judging by photos I&#8217;d seen of other cafes. In short, lots of pink.

Actually, I may have completely misjudged these places if what Dreamin offers is the norm. You&#8217;re pretty much getting a party for a 500 yen cover charge.

Maids would enter from the kitchen and chat up patrons sitting on either side of the split bar. Beyond the bar were several tables and a wood-floor area in the corner on which maids would make announcements and patrons would get up and dance or do little song numbers opposite the maids. We gave one man, whom we took for a regular, a standing ovation for repeatedly going all out in this regard.

The maids make it their mission to inject life into every aspect of your dining experience. They don&#8217;t just bring out your food and drinks. They lead your table in ceremonial good-luck chants. They use ketchup bottles and draw cute little pictures on your omelet.

The good times continue during the meal, too. Our main maid challenged Timmy, our celebrated bachelor, to a duel of Russian roulette, the plastic alligator version. For five minutes they took turns pressing down teeth until someone would pick the wrong tooth and trigger the plastic alligator&#8217;s mouth to close.

It was close, but in the end, the maid had more wins than Timmy, who in defeat had to do a spin move and chant on the wood floor in front of everyone. If our table was the noisiest during all of this, it was by a narrow margin. I got the feeling this was typical fun for this maid cafe.

I don&#8217;t know if every maid cafe tries for a similar vibe, but this one hooked us from the get-go. Skeptical wives and girlfriends need not worry. There were plenty of women with other groups, and all looked to be having a good time.

Fun and games. Singing. My impression upon leaving: Heck, next time let&#8217;s bring the wives and kids!