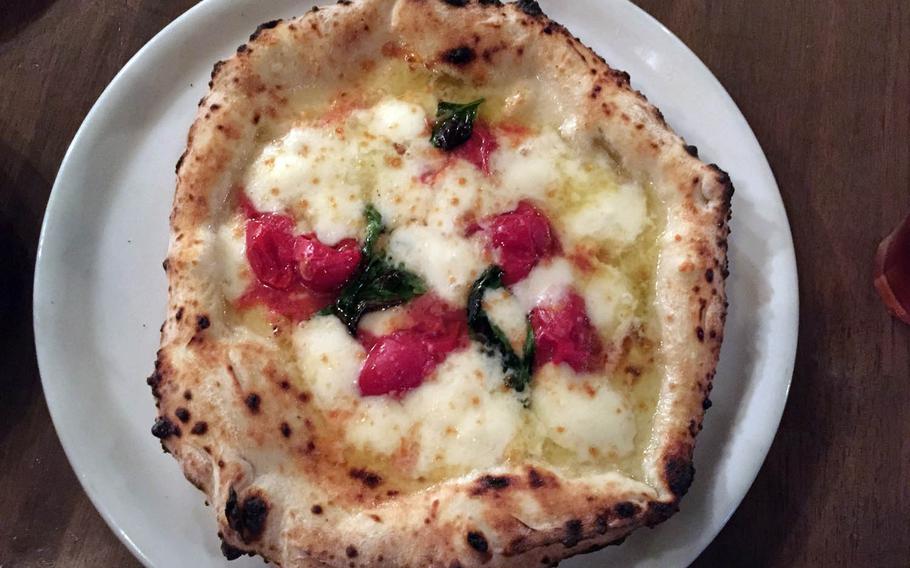 Buy Photo
The pizza margherita at Seirinkan costs more than those at most pizzerias in Naples, but the quality is on par with the Italian pizza capital. (Erik Slavin/Stars and Stripes)

This is not a review of Da Isa. If I’m waiting two hours for a pizza, it had better come with a side of money.

Da Isa is probably great, but it can’t be that much better than Seirinkan, which is located in the same neighborhood.

After a five-minute wait with no reservation on a Sunday night, we were seated in a restaurant that, to folks of a certain age, looks like a family-friendly version of a Nine Inch Nails video (if you’re younger, think steampunk.)

The wrought-iron-and-steel entrance gives way on the ground floor to a super-heated oven, manned with intensity by Susumu Kakinuma, the restaurant’s chef and owner.

Most diners are escorted up a winding metal staircase to one of the top two floors. Despite the industrial decor, the cozy dining rooms feel intimate enough for a date night.

Your pizza choice at Seirinkan is simple: margherita or marinara. While the crushed tomato, garlic and oregano on the marinara gets high marks from Japanese diners online, I came for cheese, so margherita was the easy choice.

Kakinuma’s margherita is heavier on the cheese and less so on the tomato than many versions of the classic pie.

The generously applied olive oil settles at the intersection of the cheese and the fluffy crust. The crisp, sturdy dough easily supported the toppings without going limp, which is the unfortunate hallmark of many lesser-quality margheritas in Tokyo.

For the sake of full disclosure, I get pretty picky about pizza, especially when it costs more than what’s available from the grocery store freezer. My tastes generally favor New York and Chicago varieties over the Italian originals.

That said, there’s no denying Seirinkan’s quality. The cheese, tomato, oil and dough all pop with fresh flavors. It’s easily worth the 1,500 yen, or about $12 at today’s favorable rates.

The pasta vongole bianco is a fine secondary dish to the pizza. It’s an average-sized Japanese portion — in other words, small by the increasingly large American restaurant standard — but it’s enough with other food. The pasta is al dente, as it should be, and the flat-leaf parsley counterpoints the white clam sauce very well.

One diner did find the pasta dish salty. Much of the food at Seirinkan was liberally salted, but I thought that it accentuated the flavor well.

In retrospect, I’d have chosen an appetizer other than the insalata verde, or green salad. It’s lettuce, oil and vinegar, sea salt — and that’s all. The sauteed broccoli seemed very popular with nearby diners and appears to be a more visually interesting choice for a side vegetable.

Maybe I’ll try Da Isa one of these days for the sake of comparison, if the line dies down to something bearable. If not, I wouldn’t have any regrets taking my pizza craving back to Seirinkan.

Directions: Exit Naka Meguro toward the southeast, not the main road in front of the station. Walk around the large office park and take a left after Ceylon Inn. The restaurant is on the left, about 5 minutes away from the station.

Menu: There’s no English menu, but most of the menu is katakana/hiragana, and some English is spoken.