To all the turkeys I've ruined before 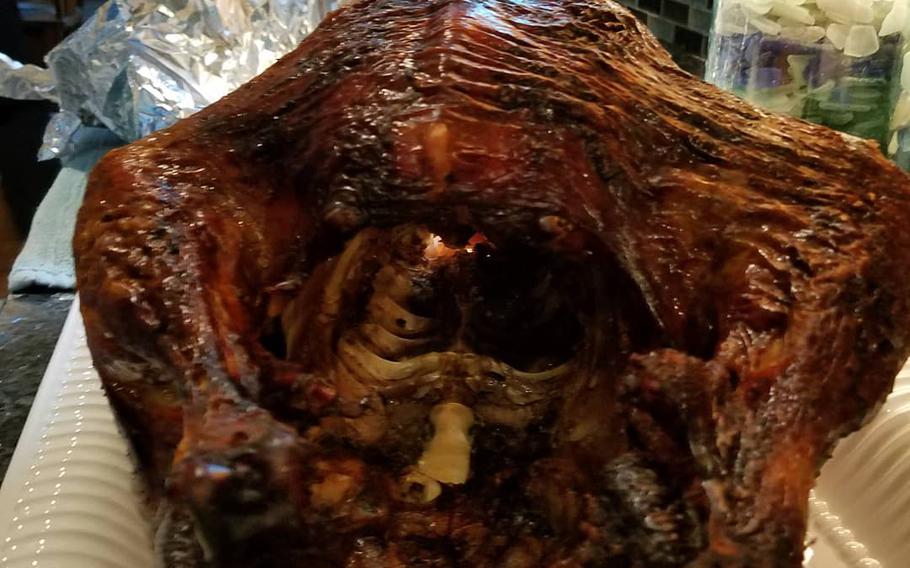 Some years are better than others when it comes to turkey cooking in the Molinari household. (Lisa Smith Molinari)

Since my husband, Francis, and I tied the knot many years ago, I’ve cooked exactly 26 Thanksgiving turkeys. We ate every one of them, from their white tenderloins to their sinewy wings. Molinaris are not known to waste food, after all. But truth be told, not every turkey I cooked was perfect.

In fact, quite a few of the 26 birds could best be described as “learning experiences.”

As a newlywed, I envisioned myself on our first Thanksgiving, aproned and waving a basting brush like a magic wand, wafting gracefully in and out of our kitchen on the delectable scent of roasting turkey, simmering cranberries, herbed dressing and buttery potatoes. The perfect new Navy wife preparing the perfect holiday feast.

However, at age 27, I had never been taught how to roast a chicken drumstick, much less a whole turkey. I had lived the simplified life of a single woman, subsisting on a diet dominated by noodles and eggs, and believing that as long as I could melt cheese on something, I’d be fine.

Although I had grown up watching my mother cook elaborate meals from scratch, I had assumed that such skills were automatically bestowed upon taking marital vows. And even if cooking wasn’t an innate ability, I’d been given the key and essential wedding gift that would show me the way: a “Better Homes and Gardens New Cookbook.”

Despite having thoroughly perused the poultry section of this iconic gingham manual of domesticity, I neglected to thaw the bird properly, couldn’t decipher the cooking time from the complicated weight chart, and forgot to remove the bag of giblets. Naively, I thought basting the turkey was the ultimate key to success, but I opened the door so many times, the oven couldn’t maintain enough heat to cook the bird properly. Two hours later than expected, we took our Butterball out of the oven and nibbled cautiously at the breast meat, which was singed because I’d gotten frustrated and turned on the broiler.

The next year, I found the kitchen gadget that would solve my culinary problems — a meat thermometer, which my cookbook instructed should be inserted into the turkey’s thigh for a proper reading. The only issue? I had no idea where that was.

The succeeding Thanksgiving holidays were a crapshoot. After one year’s turkey proved to be too small as evidenced by our guests nibbling at vertebrae in search of meat morsels, the next year’s turkey was so large, our repertoire of leftovers lasted until Christmas and included turkey sandwiches, turkey salad, turkey soup, turkey divan, turkey stroganoff, turkey tetrazzini and turkey enchiladas.

After serving one underdone bird whose bloody juices tainted the stuffing and had us all fearing salmonella poisoning, I cooked the next several turkeys so thoroughly, eating them required alternating bites with swigs of water in order to swallow the dry meat.

I received a turkey deep fryer one year for Christmas in hopes that I’d find the key to moist white meat, but after weighing the substantial risk of lighting my own hair on fire, I opted to stick with my oven. That year, I discovered that the plastic leg holder doesn’t actually melt after you forget to take it off the turkey. Another year, I found that a hair dryer comes in handy when defrosting. And the next year, I ascertained that, no matter what Martha Stewart says, there’s no need to brine your turkey with fresh juniper berries.

I eventually realized that the perfect Thanksgiving turkey is nearly impossible to attain. While stationed in Germany, I tried a method of roasting breast-side down, which resulted in delicious, juicy meat; however, the finished bird looked like it had flown out of a Zombie Turkey Apocalypse with sodden, hanging chunks of pale skin. Last year in Rhode Island, I tried the convection roast function on my oven, which produced a turkey that appeared to have been electrocuted, but was surprisingly edible.

Every year, I learn something new, and regardless of how my 27th bird turns out, I know I’ll be grateful for at least one thing this Thanksgiving: Gravy.