The sounds of summer: Festival concert season is here Tens of thousands of fans crowd in front of the main stage at Rock am Ring to watch the Scottish band Franz Ferdinand perform on the final day of the three-day festival. (Robin Hoecker / S&S)

Tens of thousands of fans crowd in front of the main stage at Rock am Ring to watch the Scottish band Franz Ferdinand perform on the final day of the three-day festival. (Robin Hoecker / S&S) 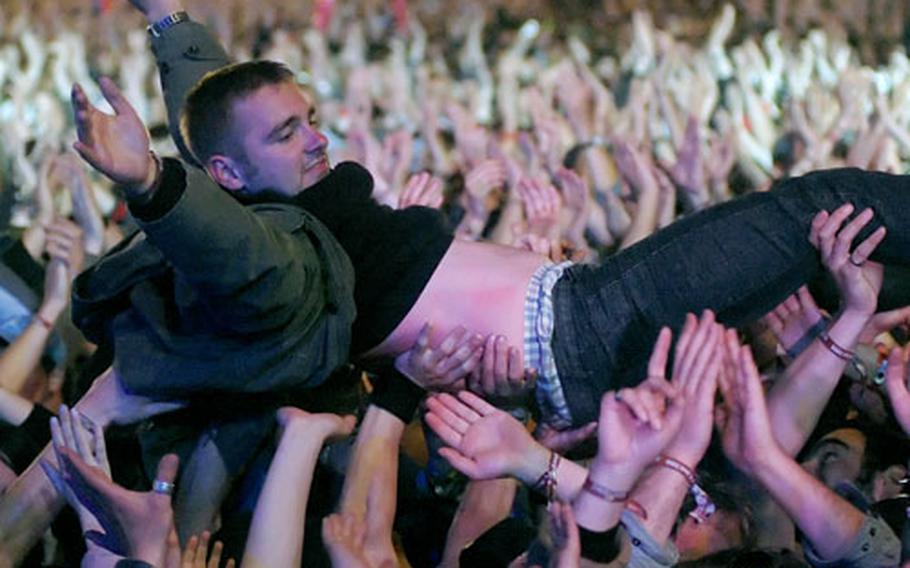 A happy concert-goer surfs along the densely packed crowd during the Franz Ferdinand performance at Rock am Ring. (Robin Hoecker / S&S)

Ask someone to name the first band he or she saw live. Chances are, the name will be easily recalled, along with the circumstances.

Like a first kiss, it&#8217;s a music lover&#8217;s rite of passage. Ticket purchased, the interminable wait begins until that fateful evening when the band hits the stage. The next day, there&#8217;s the post-concert euphoria as you go about sporting your tour T-shirt, humming the tunes you recognized and planning to go buy the newly released album the tour promoted.

Imagine that experience multiplied by a factor of 20. If you cut your teeth stateside at a show watching a big-name act, featuring, if you&#8217;re lucky, an up-and-coming opening act, you&#8217;re only vaguely prepared for the phenomenon of a European multiday, open-air rock festival.

The experience for a first-time concert-goer stumbling into one &#8212; such as the three-day blowout Rock am Ring in Germany &#8212; would be somewhat akin to learning to drive in one of the Formula One cars that roar around the N&#252;rburgring at other times of the year.

The drive to the track/concert venue wends through the Eifel region, a sparsely populated area of rolling green hills that in times long ago were volcanoes. Hints of what is to come appear several miles before the venue: a tent city atop a hill, the smell of a smoldering campfire, several battered-looking souls walking along the highway. When you park your car and lock its doors, you step from the known world into an alternate dimension.

When we arrived at the venue at mid-afternoon on the third and final day of this year&#8217;s festival earlier this month, the atmosphere was subdued and the energy level low. But evidence of what had gone before was in plain view at the surrounding campgrounds, from the mountainous heaps of trash to the trampled plastic eating utensils and other food-related debris strewn throughout the grounds. The suggestion of refugee camp or emerging nation was tempered by hints of Germany: a red, yellow and black flag flying above a makeshift camp, and empty wine bottles and heaps of refuse duly sorted into yellow and green recycling bags.

Despite the roughness of the scene, concert-goers were not lacking in the basics. Food stalls served up bratwursts, kebabs, Asian fare and even fresh crepes, while a makeshift &#8220;supermarket&#8221; kiosk sold sun cream, razor blades, cooking propane, film and bottled water. Prices were surprisingly moderate, a far cry from the &#8220;capitive audience&#8221; marketing you might find stateside.

As evening approached, fans trudging from the camping areas toward the stages grew from a trickle to a stream, a black-jean-and- combat-boot-clad army comprised mostly of white males. While German was the predominant language, a smattering of other languages could be heard, including the English spoken by a small gathering of members of the U.S. military community.

Having staked out an oasis of relative calm not far from a crane offering bungee- jumping, the Americans waxed enthusiastic about all aspects of the event, including the positive reception from the German fans, the musical lineup, the ability to remain informed by a text messaging service direct to a mobile phone, and the cleanliness of the facilities.

Erica Davis, 21, an Air Force civilian out of Ramstein Air Base, pointed out that attending Rock am Ring with her military friends lent a certain ease to what might otherwise be an overwhelming experience.

Her friends, Air Force Staff Sgt. Sam Yearber and Heather Huhnke, 25, a former soldier out of Kitzingen, confirmed that they had come prepared, with everything from flashlights to baby wipes to cold-weather gear.

Huhnke shrugged off any suggestion of an element of hardship, noting: &#8220;After a year in Iraq, even the porta-potties here seem pristine.&#8221;

The Americans said that despite nighttime temperatures around 40 degrees, there was no shortage of after-hour activities: streaking, boisterous singing, tents burned down and blown away. But for them, the music was the main draw. With one of the final day&#8217;s biggest-name acts, Depeche Mode, to take the stage in a few hours, several had devised a plan of action.

As the evening approached and the crowds grew, Huhnke made it clear she was glad to be part of the scene.