The lure of fishing off Okinawa’s coast 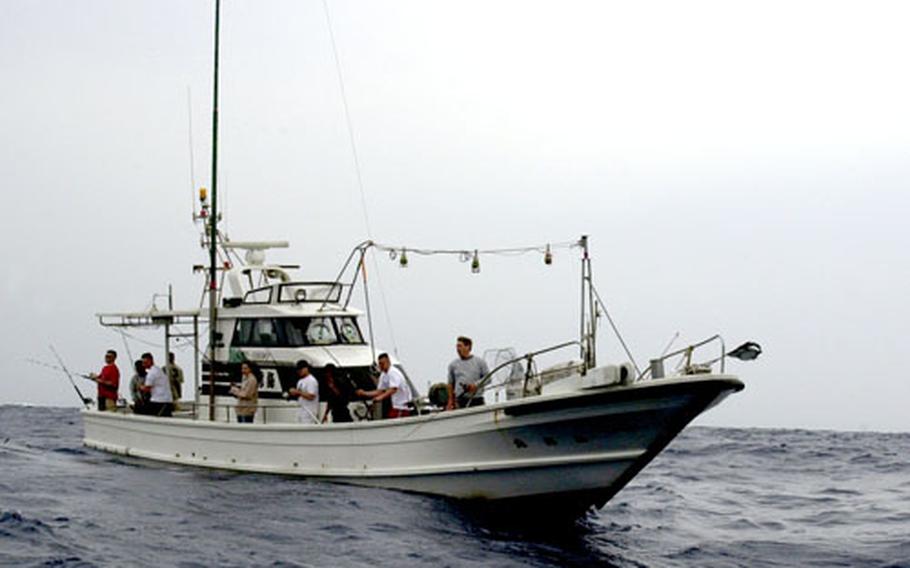 Those trying their hand at deep-sea fishing line the side of this boat in the commercial fishing area more than an hour off the east side of Okinawa in the Pacific Ocean. (Fred Zimmerman / S&S)

Those trying their hand at deep-sea fishing line the side of this boat in the commercial fishing area more than an hour off the east side of Okinawa in the Pacific Ocean. (Fred Zimmerman / S&S) 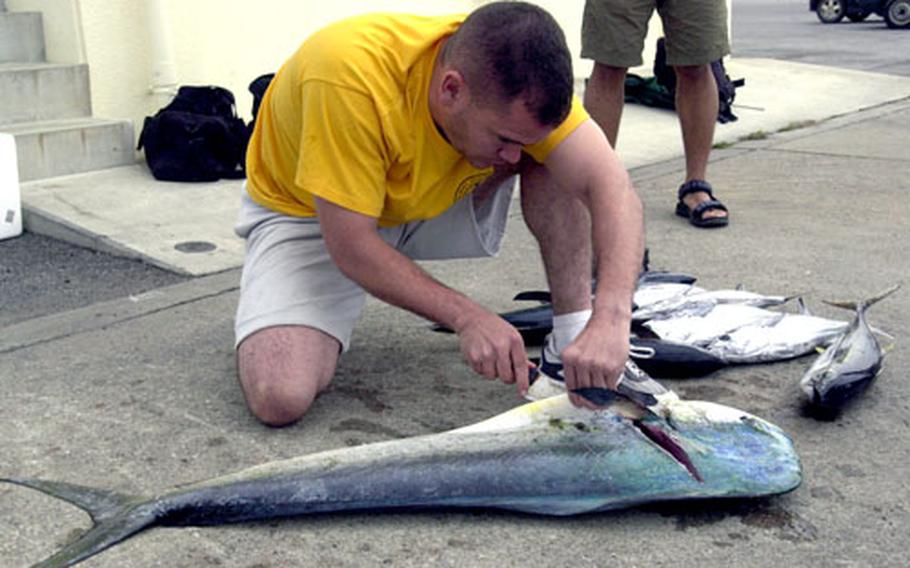 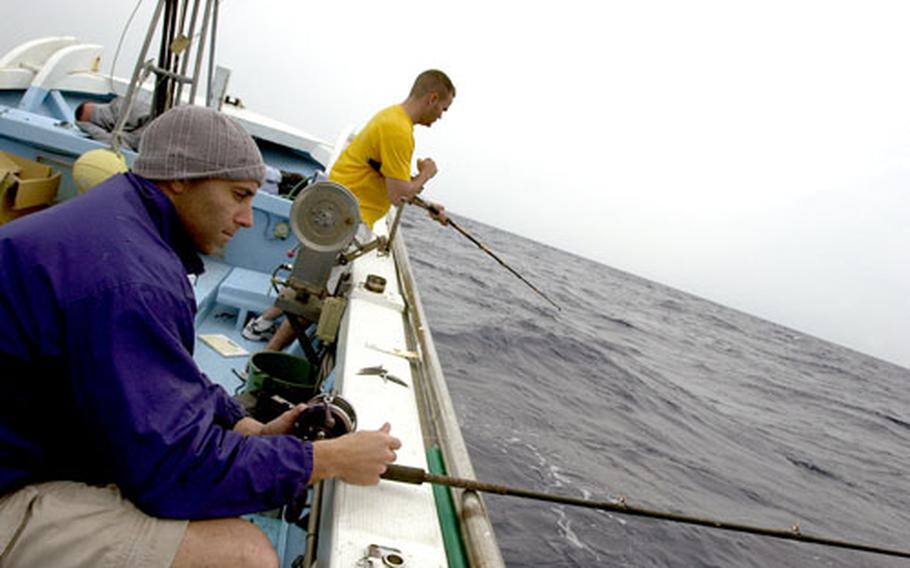 Marine Capt. Josh Rosen, foreground, and Navy Lt. James Quick drop lines in the water during a recent deep-sea fishing trip in the Pacific Ocean off the Eastern side of Okinawa. (Fred Zimmerman / S&S) 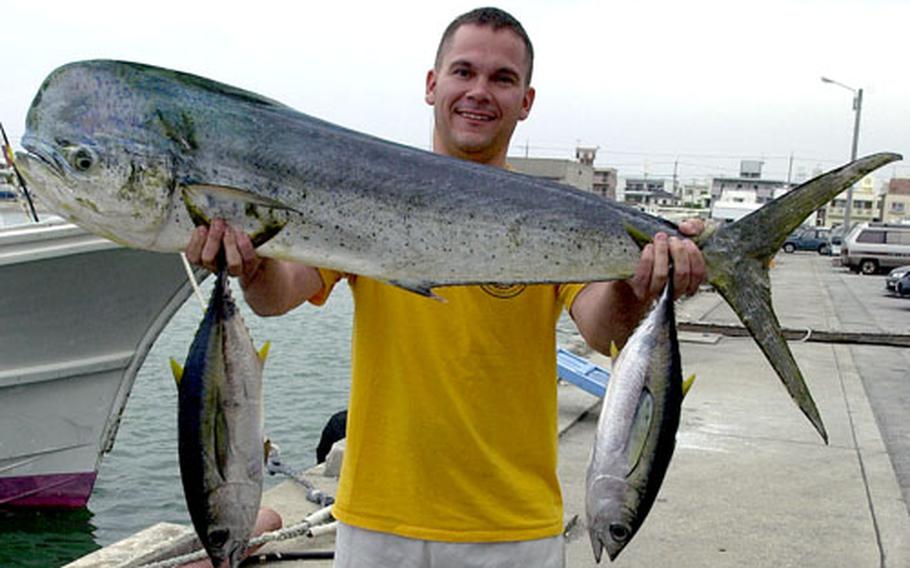 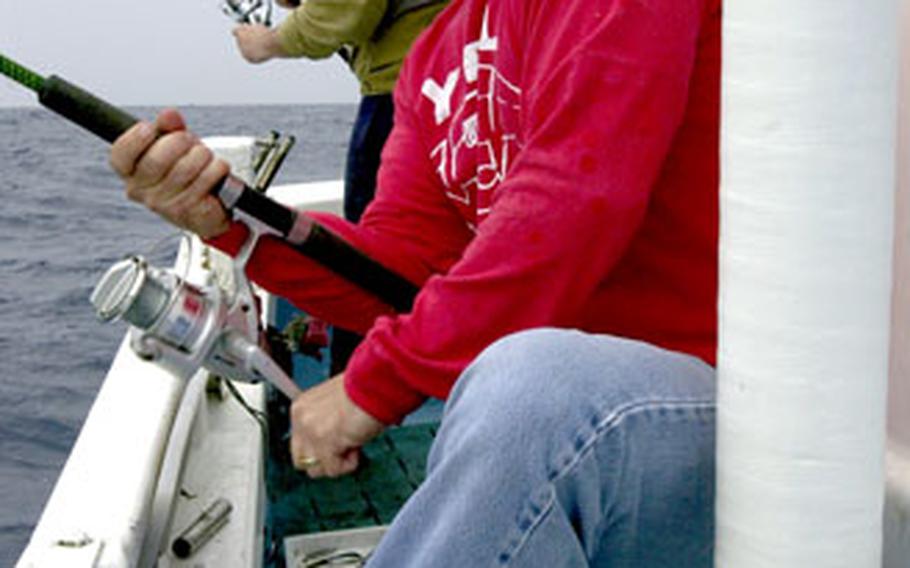 Navy Lt. Rob Barrett begins to pull in a yellow fin tuna during a recent fishing trip out of the Nakagusuku Port on Okinawa. The charter went out to “the piles” — a commercial fishing area more than an hour off the coast. (Fred Zimmerman / S&S)

While that fish story may be a bit dramatic, if you&#8217;re in the market for your own &#8220;the one that got away&#8221; tale, there&#8217;s ample opportunity on Okinawa. Charters run nearly nonstop from several military recreation areas and off-base commercial ports.

John Knuth, who during the week works on Camp Foster, helps friend Chris Pancoast out on some weekends by acting as a guide.

Pancoast arranges charters and provides guides for up to eight anglers. He uses local fishermen who know the good spots, and have the rights to fish in certain waters.

Most local, off-base charters can take up to eight people and cost about $100 per person, and include bait and tackle, but not fish- cleaning services. On-base charters are less expensive &#8212; anywhere between $29 to $66 per person for up to six people, depending on how long the charter is for &#8212; but reservations fill up quickly.

With summer approaching, so too is the marlin season, Knuth said. While the occasional Marlin will be landed, he said mahi mahi and yellow fin tuna are mostly caught. Knuth said the big-eye tuna season is approaching, and when it gets really hot in the summer, captains will fish for mahi mahi during the day, and will go night fishing for the tuna.

During his last trip before leaving Okinawa for new duties in Virginia, Navy Lt. James Quick reeled in one large mahi mahi while trolling during the hour-plus trip to the fishing site. Quick said he&#8217;s been fishing for years, and went out deep-sea fishing about five or six times while on Okinawa.

During his last trip here, Quick and three other fishermen &#8212; four of the eight on board didn&#8217;t drop a line due to seasickness &#8212; caught about a dozen fish: the one mahi mahi and a mix of yellow fin tuna and bonitas.

While it was a slow day, Knuth said it can get extremely busy. The best day he&#8217;s ever seen while acting as a guide was eight fishermen catching more than 130 fish: 97 mahi mahi and more than 30 other fish, mostly tuna.

For more information on fishing, or to arrange a charter off base, contact Chris Pancoast at 090 9788-0282.

Camp Schwab, Oura Wan Boating: Half-day (three hours) and full day (six hours) trips are available for up to six people &#8212; no children under the age of 7, though &#8212; for $175 and $350, respectively, Monday through Friday. The charters fish for mahi mahi, wahoo, and yellow fin tuna, and land the occasional marlin. Boat captains provide instructions for less-experienced anglers, and the price of the charter includes bait, tackle and fish cleaning. For more information, or to make a reservation, call DSN 625-3683. Source: Marine Corps Community Services

White Beach Naval Facility: Reservations for Wednesday through Sunday fishing trips from White Beach can be made up to 60 days in advance. Up to 10 anglers can head out for a day of bottom fishing for $350, or up to six fishermen can spend the day trolling for $400. Tackle and bait are provided, but not fish cleaning. For more information, or to make reservations, call DSN 634-6950/6951. Source: Navy MWR