‘The grenade is in the truck’ 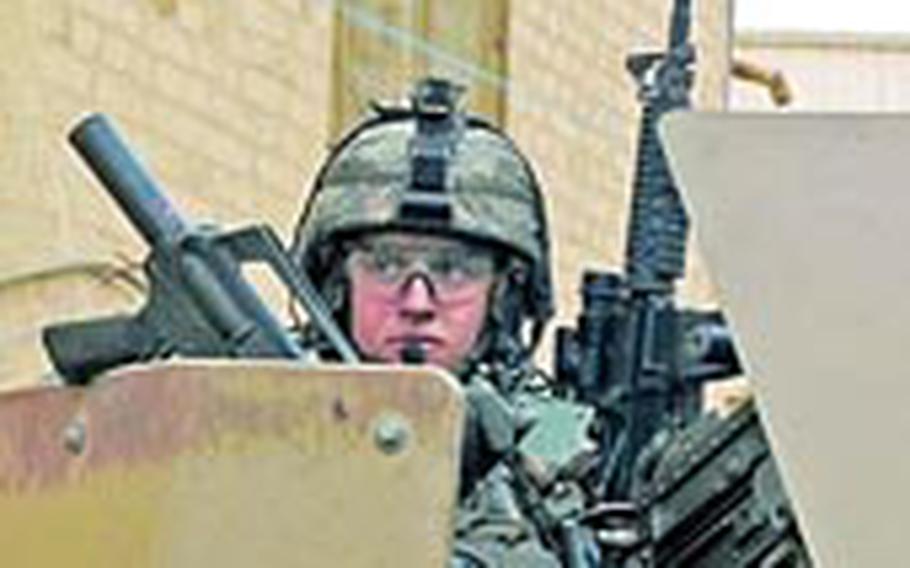 In his MySpace page, Pfc. Ross McGinnis wrote about his "three separate lives" even though he hadn&#8217;t yet reached his 20th birthday.

His first, his pre-Army days, centered on his family and friends while growing up in Pennsylvania. His second was his time stationed in Germany, where he met more friends and "my true love," his girlfriend Christina.

"My 3rd life is my army life," he wrote "Yet again another large group of friends, who are more like a bunch of brothers. The kind of brothers you can joke with and cry with. The type you can make fun of all you want, but as soon as someone else does, they are getting their ass kicked."

The self-described "skrawny white kid" posted the message shortly after deploying to Iraq for the first time. He said he expected the tour to be hard, but looked forward to getting back to all three homes.

"I just cannot wait for the day when I can connect all 3 lives into one," he wrote.

That happened less than a year later, when his family, friends and fellow soldiers gathered at Arlington National Cemetery in Virginia for his funeral. His friends said McGinnis sacrificed his "three separate lives" in order to keep four of his fellow soldiers alive.

McGinnis&#8217; lives intersected again last month, at a White House ceremony where the teenager was posthumously awarded the Medal of Honor. The event came just a few days before what would have been his 21st birthday.

Sgt. Ian Newland, one of McGinnis&#8217; first friends in the service and one of the last to see him alive, said the young soldier seemed to be friends with everyone. McGinnis was as comfortable playing with Newland&#8217;s kids as he was playing poker with war-weary soldiers in Iraq.

"It was a modern day Vietnam," Newland said. "We had ambushes on almost a daily basis. The drive-bys and hand grenades were first, and the IEDs came later on. You never let down your guard."

But McGinnis, a Humvee gunner, still had a joke ready at the end of every patrol, something to ease the tension. In late November, after his picture appeared in Stars and Stripes, McGinnis became the butt of the jokes, and was happy to play showman again for the unit.

Just a few days later, on Dec. 4, McGinnis&#8217; combat patrol was dispatched to deal with weapons smuggling and kidnappings in the area.

That morning a military police patrol had been attacked on their same route, and McGinnis&#8217; Humvee drove by the crater left by the roadside bomb in that attack improvised explosive device. As they wound through area side streets, an unidentified insurgent peered out from a nearby rooftop and lobbed a grenade at the vehicles.

Solders told Army investigators that McGinnis shouted a warning and tried to grab the explosive before it got into the Humvee, but it bounced by him and fell onto the vehicle&#8217;s radio mount.

According to service reports, none of the men inside the vehicle realized where the grenade had fallen. As he prepared to leap to safety, McGinnis realized they would not be able to unlock the heavy Humvee doors before it detonated.

When Truck Commander Sgt. 1st Class Cedric Thomas shouted for the location of the explosive, McGinnis dropped down from his safe perch and announced, "The grenade is in the truck."

He threw his back onto the mount an instant before it exploded.

In the resulting hail of smoke and shrapnel, Newland suffered severe injuries from the shrapnel and blast wave, but survived the attack. Thomas and the other two passengers suffered minor injuries.

Investigators said McGinnis was killed instantly. Thomas told them the gunner clearly had the time and the means to get to safety, but opted instead to try to save his fellow soldiers.

Army officials said McGinnis&#8217; "extraordinary heroism and selflessness at the cost of his own life" embody the Medal of Honor, the nation&#8217;s highest military honor.

Just days before the attack Newland was in a nearly identical ambush, where a grenade dropped through the gunner hatch and into his Humvee cab. Newland and his soldiers followed their training perfectly in that incident: The gunner yelled a warning and jumped away, and the other soldiers evacuated as quickly as possible.

It took them several seconds, too long to survive if that grenade hadn&#8217;t been a dud, Newland said.

"We got lucky," he said. "And just a week and a half later, we have the same thing, only (McGinnis) didn&#8217;t follow training. He made a decision to jump on it, to sacrifice himself."

McGinnis&#8217; family left his MySpace page up after his death as a memorial. His last login date was Dec. 1, 2006, but friends and strangers have continued leaving messages of thanks and grief for his inspiration.

One of the most frequent posters is Newland, who says he owes every day of his life since that attack to his friend.

"I will never stop telling people why I made it out of there and what an awesome soldier, person you have been in my life Ross," he wrote in one recent post. "I think of you everyday and miss you for who you are to me and my little family. Love you, brother."