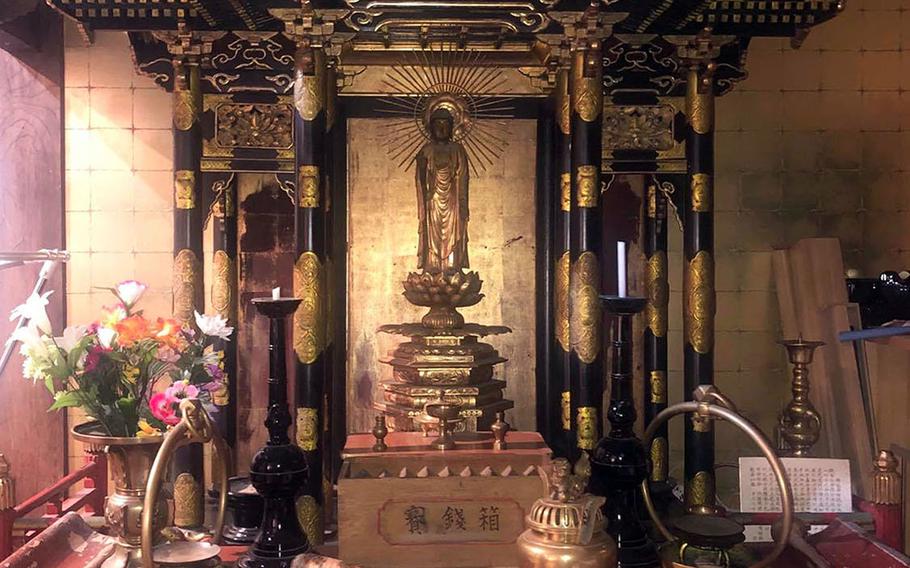 Buy Photo
Hotaru, a 250-year-old temple that now serves as an inn in Urasa, Japan, is filled with altars and Buddhist artwork. (Erica Earl/Stars and Stripes)

Buy Photo
Hotaru, a 250-year-old temple that now serves as an inn in Urasa, Japan, is filled with altars and Buddhist artwork. (Erica Earl/Stars and Stripes) 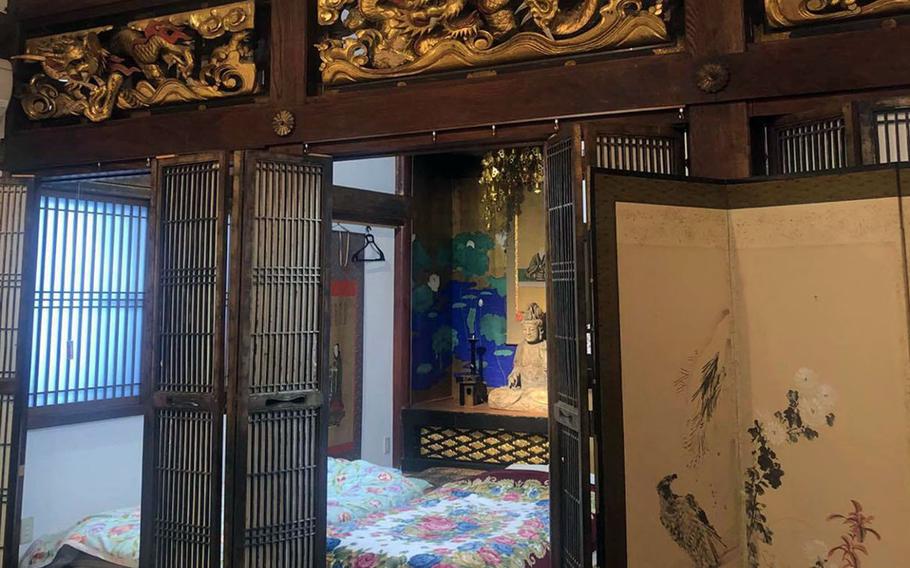 Buy Photo
Hotaru, a temple-turned-inn in Niigata prefecture, Japan, has four futon-style beds, all in one tatami room. It also includes a bathroom, shower and small kitchen. (Erica Earl/Stars and Stripes) 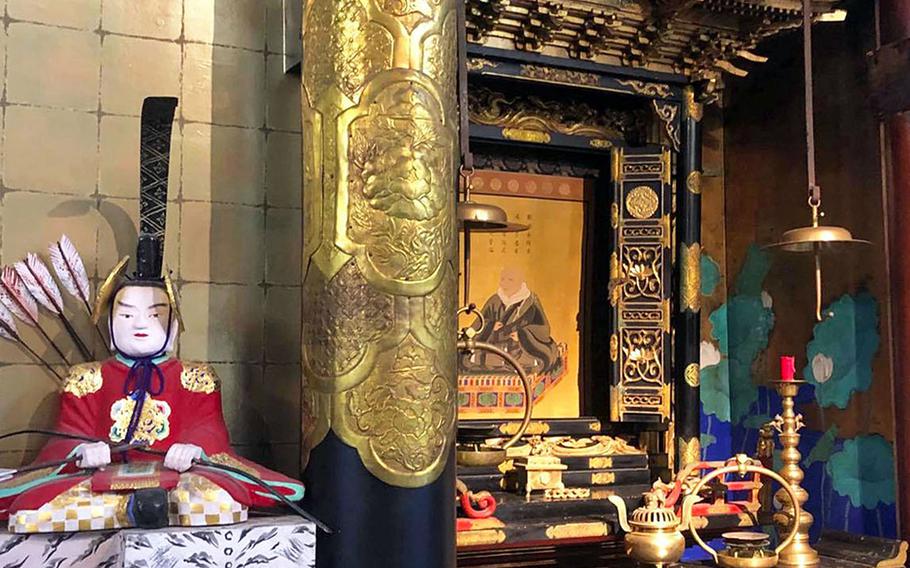 Buy Photo
The vibrant Hotaru inn in Urasa, Japan, used to be a Buddhist temple and retains most of its original altars and craftsmanship. (Erica Earl/Stars and Stripes) 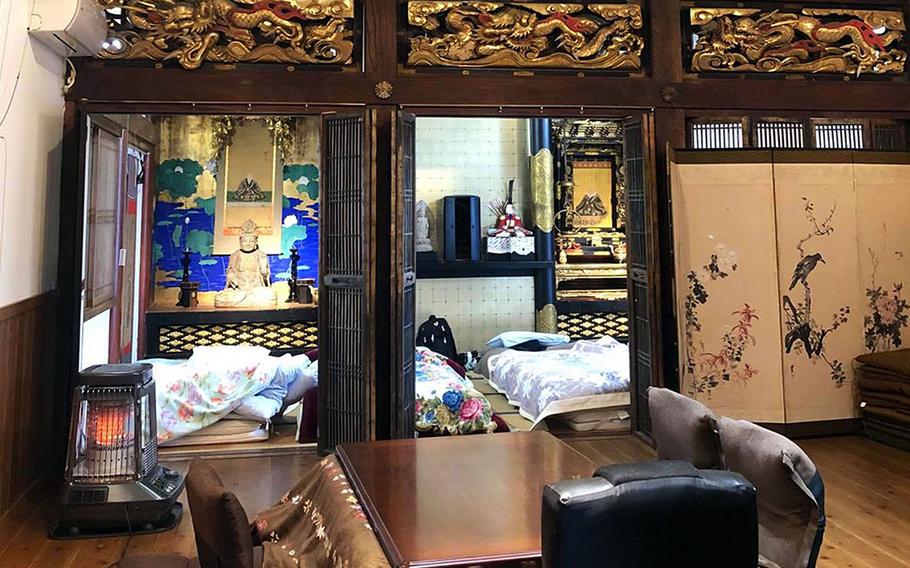 Buy Photo
Hotaru, a Buddhist temple that's been turned into a guesthourse in Urasa, Japan, combines modern lconvenicences with the beauty and history of a 250-year-old structure. (Erica Earl/Stars and Stripes)

Nestled in a ski resort town in Niigata prefecture, Japan, the Buddhist temple Hotaru is a unique inn that is beautiful to visit year-round.

The 250-year-old wooden structure is the only temple-turned-inn in Japan, according to co-owner Yoko Kuroiwa.

The temple moved location once since its founding over two centuries ago but retains most of its original architectural details and relics, Kuroiwa said.

Hotaru is hauntingly beautiful and incredibly detailed. While Hotaru has been renovated to include modern plumbing and heating, it still possesses a unique and ancient feeling. The inn has a pleasant scent of wood and incense, and from the moment guests enter the temple and are greeted by ornate dragon carvings inside, there is a distinct feeling of walking back in time.

Part of the joy in staying here is wandering through the temple and looking at the architecture, art, statues and altars and imagining its rich history. The enchanting space is ideal for a quiet retreat for couples or a peaceful solo trip.

Hotaru is in Urasa, a small town in a snowy area of rural Japan surrounded by mountains and rice paddies.

It is a popular destination for snowshoeing and skiing, but there is also plenty to do in spring and summer. There are 13 hot springs in Urasa. Tejimaya Onsen is the closest option to Hotaru and allows visitors with tattoos.

The Uonoma No Sato sake factory is also nearby for those interested in learning how Japan’s famous fermented rice drink is made. Tastings are available, and the expansive grounds are fun to roam. Even when most of the cherry blossom petals had fallen by mid-April in Tokyo, many trees were still in full bloom in chillier Urasa.

The temple is also near hiking trailheads, including the 33 Deities Pilgrimage. This 2½-hour winding hike passes 33 statutes of deities. According to legend, after completing this journey believers are supposed to be free from past sins and guaranteed a place in heaven.

Behind the temple, there is a 200-year-old traditional library where monks kept their Buddhist scripts. The library houses more than 30 Buddhist sculptures and 600 scripts, which were hand-written 300 years ago.

The library was partially damaged in the 2011 earthquake and has since become a small museum. These libraries, called kyozo, are considered sacred and are usually open only to monks, so visiting is a rare opportunity, Kuroiwa said. The entry fee is 2,000 yen, or about $18.

The temple has four futon-style beds, all in one tatami room. It also includes a bathroom, shower and small kitchen. The center of the temple is a spacious area with a kotatsu, a low, heated table popular in Japanese homes.

Despite its location in a rural area with no real downtown to speak of, Hotaru is surrounded by a diverse offering of restaurants within a 10-minute drive, including American diner-style food, Italian, Fijian-style cuisine and traditional Japanese fare such as sushi and ramen.

Hotaru, which means “firefly,” used to be a Buddhist temple called Yuinenji. After the temple’s monk relocated, parishioners requested to have Yuinenji removed from the faction’s list of temples, Kuroiwa said. The building was then designated as a community hall where elders and locals could organize some events, but mostly sat vacant.

Kuroiwa’s father bought the property, and the family decided to make it an inn in July 2018.

“To use it just as a community center once a month is a waste,” Kuroiwa said.

Kuroiwa, a native of Urasa, left at age 15 to travel and later worked around the world as a journalist and a United Nations worker. He said while he found Urasa a little boring as a kid, he rediscovered its beauty when he returned after his wife’s death in 2016.

Kuroiwa likes talking with travelers and offers itinerary suggestions as well as private sushi-making and yoga classes for additional fees.

The property is available for booking through Airbnb. Through the website, visitors can contact Kuroiwa for information about booking classes.

Hotaru costs between $66-$138 per night, depending on weekday or weekend bookings, holidays and prime skiing season December through February. There is also a one-time cleaning fee of $46.

Food: The area has a variety of restaurants, including American, Italian and Japanese cuisine.

Information: On Airbnb.com, type “Niigata” in the location search bar. After hitting search, select “more filters” in the top left corner. Select “unique stays” and select “hut.” Hotaru should be the first option that appears.