Tattoos lose their stigma, become a form of self-expression for some 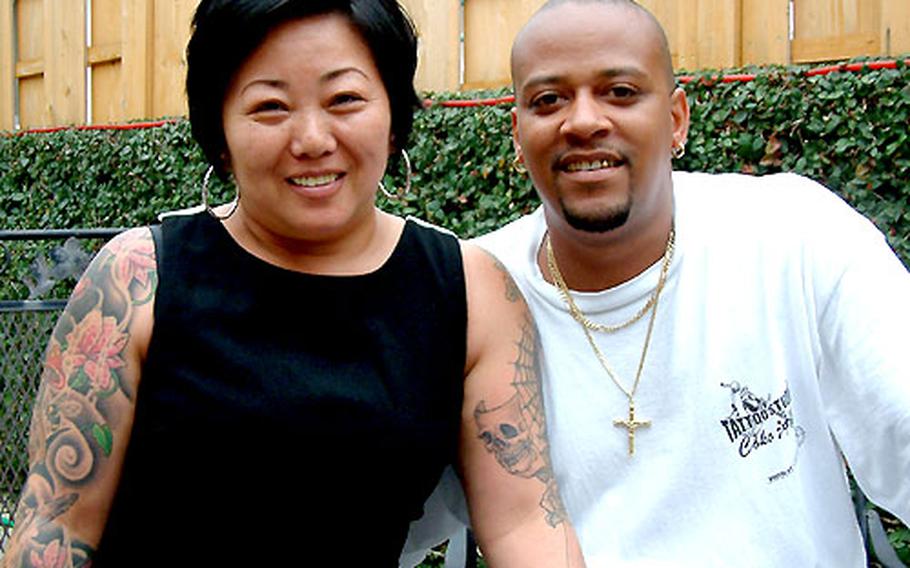 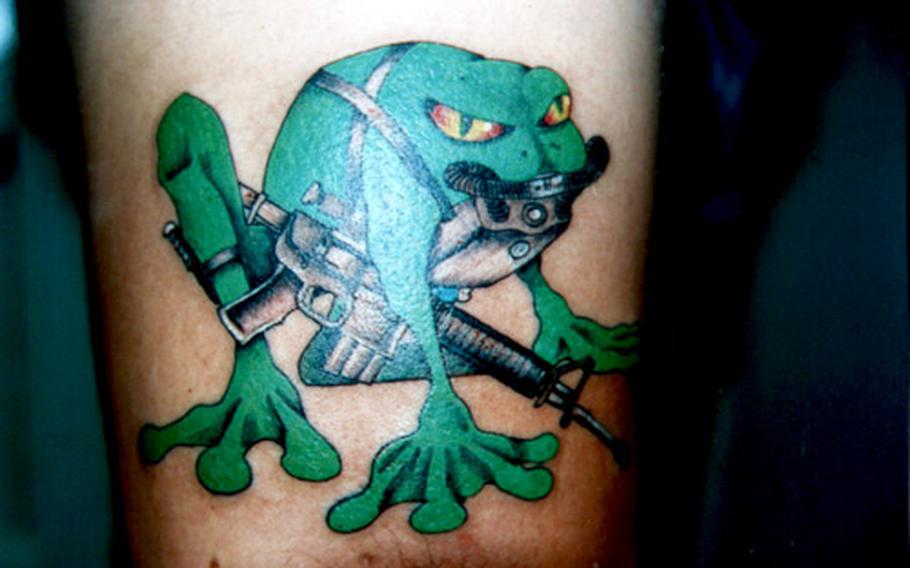 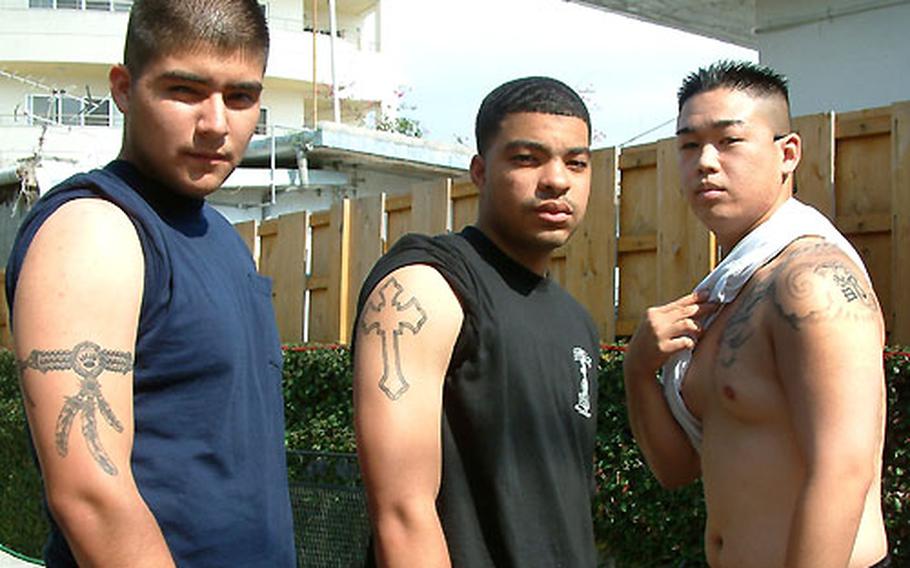 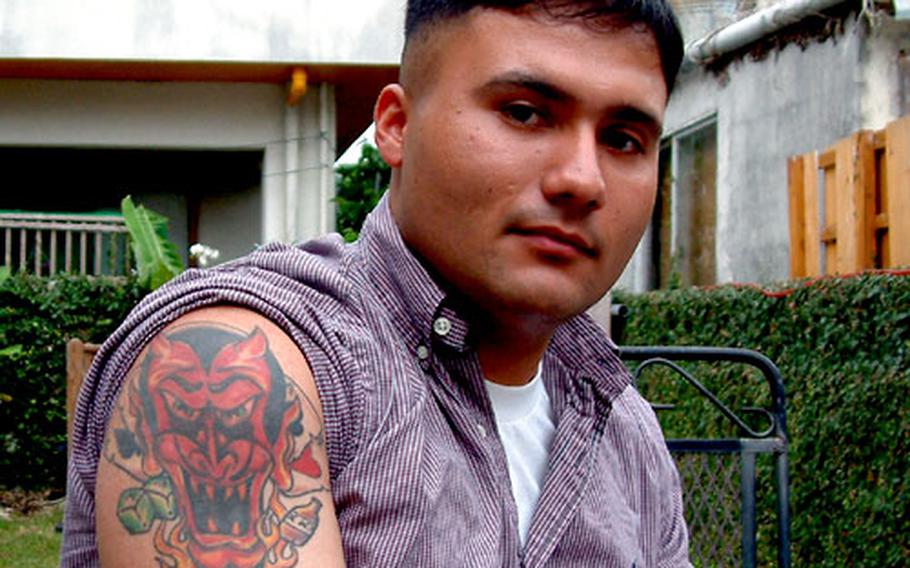 Tattoos are a form of self expression, says Marine Lance Cpl. Chris Mena, who visited Coko&#39;s to get the letters RTTG — meaning "Race to the Grave" — tattooed on his inner lip. (David Allen / S&S) 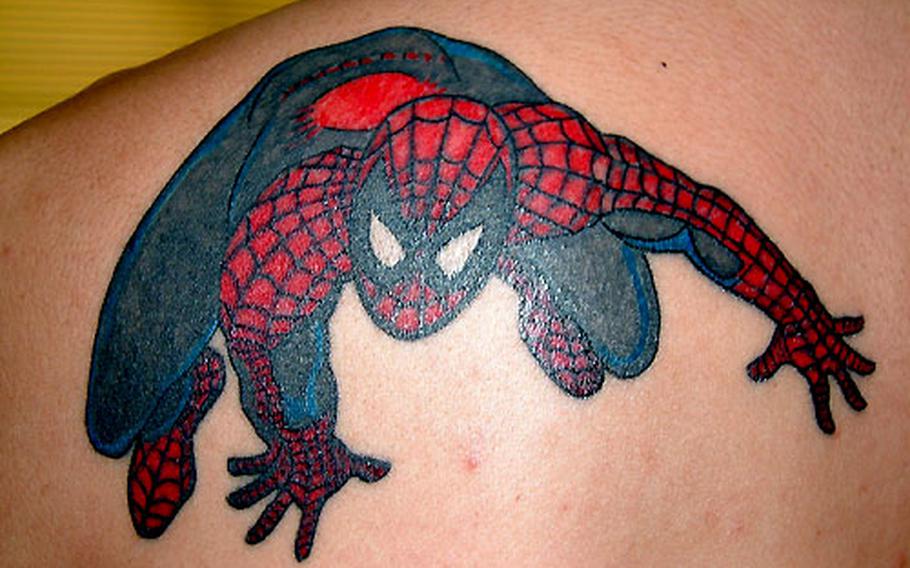 Spiderman crouches pensively on the left shoulder of Osamu Chibana, 28, an Okinawan cook. Chibana got the tattoo five years ago and came to Coko&#39;s for a color touch-up and to add Spidey&#39;s shadow. (David Allen / S&S)

Wander into the base exchange and you&#8217;re as likely to run into a young wife and mother of two kids with a butterfly on her ankle as you are some old boatswain&#8217;s mate with an anchor chain entwined around the USN tattooed on his hairy arm.

There seems to be as many teens getting tribal bands circling their arms and legs, as Hells Angels wannabes tattooed with the devil himself astride a flaming Harley hog.

Bailey was at Tattoo Studio Coko in Chatan, Okinawa, on a recent Sunday with his buds &#8212; Joseph Hunt and Calvin Tang, both 20. The three airmen are stationed at nearby Kadena Air Base.

Hunt and Tang are old hands at the body art game. Hunt, from Denver, got a Native American tribal band tattooed around his right forearm several years ago.

That&#8217;s also why Tang, from San Francisco, has the tattoo of a dragon that begins on his back and stretches over his left shoulder to his chest.

As Bailey contemplates the shade of red for his cross, Hunt and Tang pore through several books of sample art looking for their next tats.

Coko&#8217;s is run by former Marine Ken Schuur and his Japanese wife, Mako. Schuur has been decorating people for about eight years and Mako is a walking advertisement for his skills, something very unconventional for a Japanese woman.

Mako has tattoos over most of her body, from a traditional Japanese dragon that nearly covers her back, to flowers and fairies on her arms and legs.

Although body art is riding a wave of popularity in the United States, in some cultures in the Far East, people who have tattoos are still regarded as second-class citizens. In Japan it was once thought only gangsters, the yakuza, got tattoos.

But the cultural barriers are falling.

Mako got her first tattoo when she was 28 years old. &#8220;I wanted to try it out, it seemed interesting. I like to try everything out, to experience whatever life has to offer. People are more open now. When I go into a convenience store, some people will stop me and tell me I have nice tattoos.

Schuur, 35, says he was introduced to the tattoo art by a woman stationed with a U.S. Army unit on Okinawa.

He&#8217;s come a long way since then. In the albums of pictures the three airmen pour over, are dozens of examples of Schuur&#8217;s needle and ink skills.

Schuur is the only American tattoo artist on the island. He says Americans make up about 70 percent of his business.

He&#8217;s also not interested in inking anyone who comes to his shop on a whim.

He has some other rules, as well.

He says his mother, a Detroit pediatrician, was shocked at first when she learned he was a tattoo artist. &#8220;But after she saw the type of stuff I do, some of the angels and stuff, she approved,&#8221; he says. &#8220;She said she was proud that her son had opened a successful business in a foreign country.

The pain has been described as a thousand bee stings; incessant snaps of a rubber band; multiple paper cuts; the pins and needles sensation of a foot that fell asleep.

Others describe it as a slight tingling sensation or a tickle.

A person&#8217;s tolerance for pain is a factor, as is the size and location of the tattoo, says Schuur. Getting needled on the back and ankle, where the skin is more sensitive, is more painful than a tattoo on the upper arm.

Anyone who hates getting inoculations for the flu and gets upset at the sight of blood should probably avoid a tattoo parlor, he says.

Where to go for a tattoo

In South Korea, U.S. troops are banned from getting tattoos. Tattoo parlors have been off limits to U.S. forces since at least 1982 because of health and sanitation concerns, said Lt. Col. Steve Boylan, 8th Army public affairs officer.