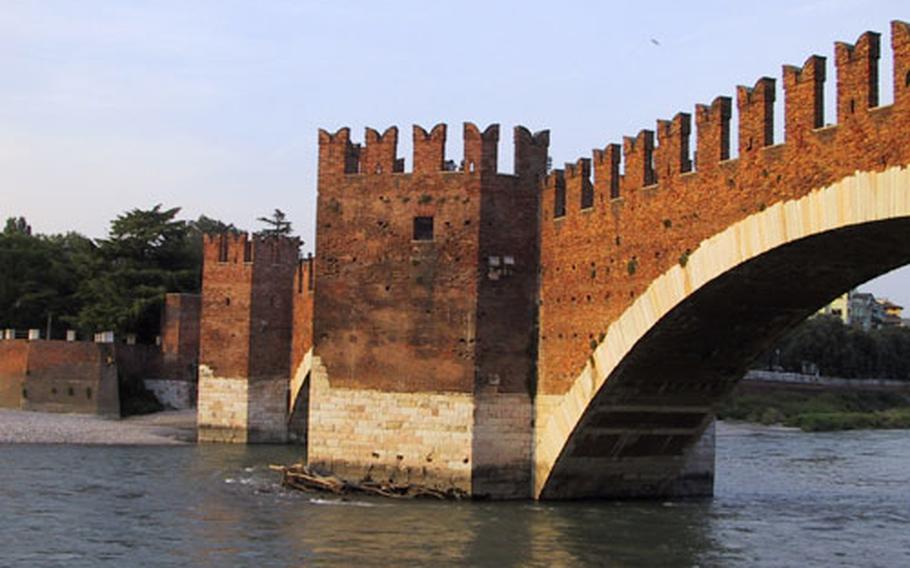 Buy Photo
Castelvecchio Bridge as it appears today. It was one of 12 bridges destroyed by retreating Nazi forces in World War II. The United States funded and coordinated the repair of all the destroyed bridges and monuments. (Jim Sajo / Special to Stars and Stripes)

Nearly 60 years ago, the U.S. military arrived in Verona, Italy, as part of the advance against Nazi forces in World War II.

This summer, it is leaving.

Military personnel have been welcome guests in Verona, which has hosted one of the longest uninterrupted periods for U.S. servicemembers in Europe in the defense of freedom. But with restructuring by the U.S. European Command and NATO, Joint Command South, the allied headquarters there, will formally deactivate on Tuesday and end a historic relationship.

Verona has long been valued for its strategic setting. Located at the base of the Italian Alps and the opening of the largest pass between northern and southern Europe, it controls what have always been important trade routes. Throughout history, ownership of the city and its immediate surroundings has been a crucial military goal.

On April 25, 1945, lead elements of the 88th Infantry Division liberated the city from the Germans. When hostilities ended, Americans stayed in Verona for a variety of postwar missions.

One of the Americans&#8217; roles was as a Regional Office of the Allied Military Government (AMG), responsible for control of troop movements, Allied pay and administration and the handling of thousands of requests for financial support from Italian agencies. Distributing controlled currency known as AM-Lira owing to the &#8220;Allied Military&#8221; stamp on old lira notes, the AMG financed schools, churches, fire departments, road and rail repairs and even bicycle maintenance for the city administrator&#8217;s office.

In 1949, the North Atlantic Treaty Organization formed with a commitment to mutual defense of member nations. A headquarters was activated in Verona as part of the command structure. Land Forces Southern Europe, or LANDSOUTH, brought all allied efforts under a single military authority and took on the added mission of planning the defense of northeast Italy.

In 1955, the Army activated the Southern European Task Force to participate in that defense. With combat teams scattered across the north end of the country, SETAF headquarters and a few support units were established in Verona.

By the mid-1950s, the number of Americans serving in the two distinct organizations of LANDSOUTH and SETAF had grown to more than 1,000. To support that population, the Department of Defense opened a school in 1956. The school was home to nearly 700 pupils through ninth grade, employed more than 60 staff and faculty and eventually became a gathering place for the greater American community.

The Americans, who made up the largest group of non-Italians in the NATO headquarters, stayed busy participating in numerous alliance and Partnership for Peace exercises. That experience paid off in 1963 when LANDSOUTH coordinated relief operations to comfort thousands of flood victims north of Venice, and again in 2000 when the headquarters deployed to Kosovo. Americans assigned to LANDSOUTH also supported NATO operations in Albania, Bosnia and Macedonia.

Air Force Col. Don Greiman, director of staff of the NATO headquarters and the senior American officer assigned to Verona, says the Americans have had a positive impact on operations of the headquarters on a daily basis.

&#8220;Our tradition of professionalism and spirit of cooperation from the junior NCOs to our senior officers is one of the most significant contributions we make,&#8221; he said.

A recent shift in forces has reduced the number of Americans in Verona. SETAF moved to Vicenza in 1965. Last year, NATO redesigned its military structure, deciding to close many longstanding headquarters, including the one in Verona. Greiman said this week&#8217;s ceremony makes Verona one of the first headquarters to close under the new structure.

The Department of Defense Dependents Schools closed the school on June 4, when the school year ended. Closure of the rest of the community will continue throughout the summer.

Verona&#8217;s tiny U.S. installation is known locally as The Compound, and houses the school, a gymnasium, a small shoppette and a post office. Bill Murphy, the 22nd Area Support Group Verona operations specialist, is leading a planning team to account for property, assist civilian employees with job placement and expedite return of the land to Italian authorities.

He said no final decision had been made on the future of The Compound&#8217;s buildings.

Americans in Verona did not have the same kind of facilities as those stationed at many other bases in Europe, including ones elsewhere in Italy &#8212; Aviano, Vicenza, Naples and Sigonella. But they worked in an atmosphere of camaraderie and cooperation. They developed an ideal community: A strong partnership between military leaders and the school, active participation in community activities and rampant volunteerism sustained a high quality of life for the military and their families.

&#8220;People always loved living here,&#8221; said Robert Generelli, who arrived in the city as a military chaplain&#8217;s assistant in 1956 and still lives there. He has been both a teacher and a principal at the DODDS school and today works on the Youth Services staff.

&#8220;The opera in the summer was very popular, and the NATO wives organization was active and used to include the schoolteachers. Our school always had some kind of exchange program going on with local schools, and still did up to this year.&#8221;

The Italians seemed to like having the Americans as neighbors, co-workers and employers.

During the war, it was not unusual for local men to work as drivers for U.S. forces. Today, Danilo Borgetti, who drove for the 88th Infantry Division, still proudly carries a letter of appreciation assigned by the division commander in his wallet. He unfolds the paper delicately and shows it proudly, remarking, &#8220;The general gave me this letter personally.&#8221;

Through the years, as Americans transferred out of the city, few were happy to go. And Italians say they are sad to see the Americans go now.

&#8220;The Americans have been here since I can remember, always a part of the Verona population,&#8221; said Romana Caloi, a professional tour guide for the city. &#8220;We will miss the Americans for sure, but they will always be welcome here as our guests and friends.&#8221;

William Shakespeare&#8217;s classic tale of love and woe, &#8220;Romeo and Juliet,&#8221; is set in Verona. In it, Juliet tells Romeo, &#8220;Parting is such sweet sorrow.&#8221; After 60 years of formal military friendship and cooperation, Americans are leaving. Without fanfare or celebration, the last Americans will exit this historic and charming city with tearful eyes and fond memories.

&#8212; Jim Sajo is a retired Army officer who served on the staff of the NATO headquarters in Verona and as the U.S. director of community activities there until his retirement last year.