Submarine tour gives a peek at world beyond Waikiki Beach Buy Photo
An Atlantis submarine surfaces near the shore of Waikiki Beach, Hawaii, after a recent undersea tour of reefs. (Wyatt Olson/Stars and Stripes)

Buy Photo
An Atlantis submarine surfaces near the shore of Waikiki Beach, Hawaii, after a recent undersea tour of reefs. (Wyatt Olson/Stars and Stripes) Buy Photo
Passengers look through large portholes on the side of an Atlantis submarine during a recent tour. In the background, the sub's pilot sits at the controls. (Wyatt Olson/Stars and Stripes) 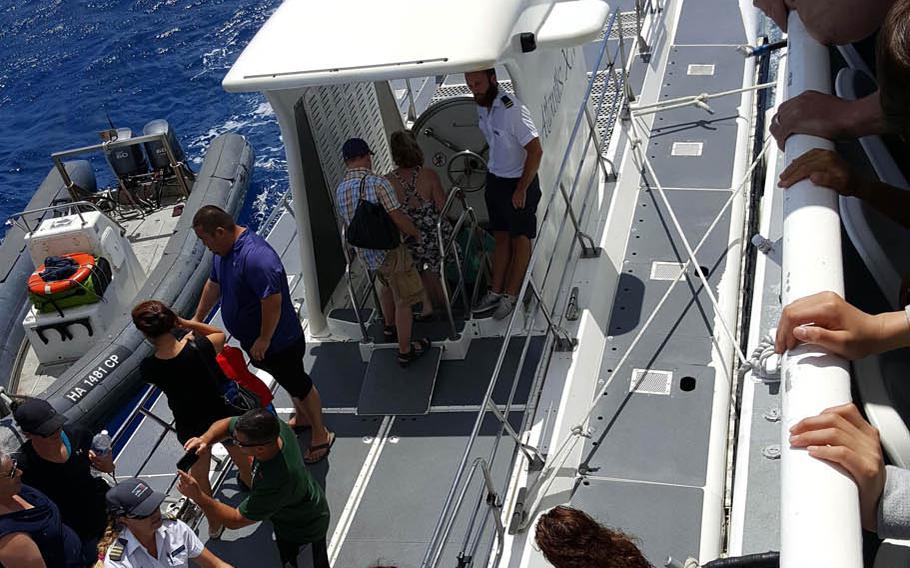 Buy Photo
Passengers transfer from a shuttle boat to an Atlantis submarine during a recent tour in Hawaii. (Wyatt Olson/Stars and Stripes) Buy Photo
A small school of fish swim by the porthole of an Atlantis submarine during a recent tour in Hawaii. (Wyatt Olson/Stars and Stripes) 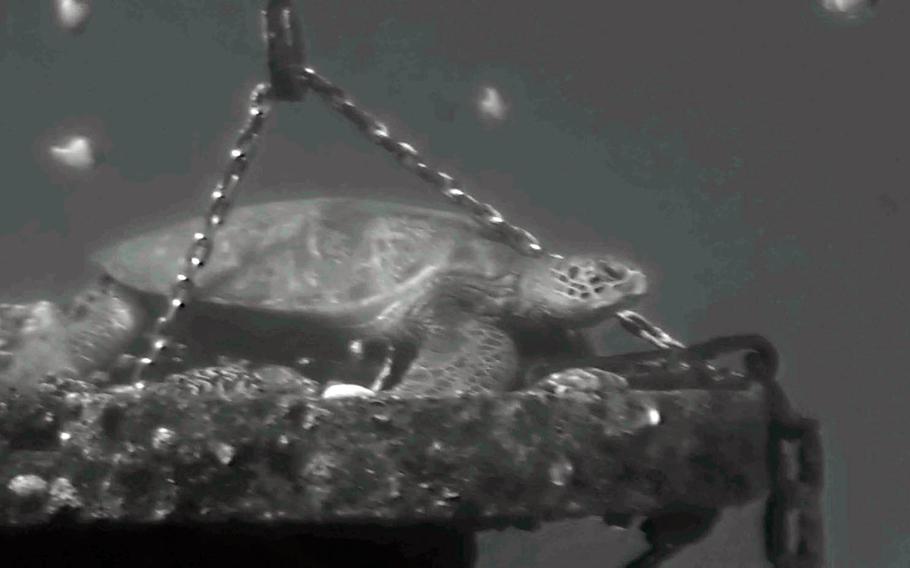 Buy Photo
A green sea turtle, seen during a recent Atlantis Submarines tour in Hawaii, nestles on an artificial reef a couple of miles from Waikiki Beach. (Wyatt Olson/Stars and Stripes) 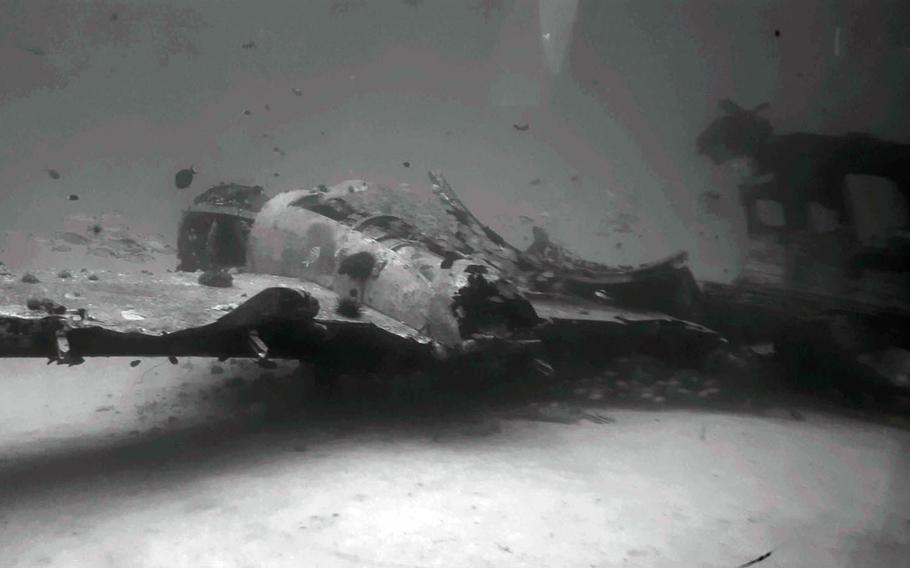 Buy Photo
The skeleton of an airplane, deliberately sunk in the waters off Waikiki Beach to create an artificial reef, is seen during a recent Atlantis Submarines tour in Hawaii. (Wyatt Olson/Stars and Stripes)

What’s less obvious is the ballet beneath the bay waters — the sea life zigzagging around the reefs within a mile or two of the beach’s edge.

The best way to get a look at that is to don scuba gear for a dive down.

But if you’re looking for an easier, less soggy and wide-ranging tour beneath the waters beyond Waikiki Beach, there’s Atlantis Submarines.

Simply getting a ride on a submarine is a unique experience for most of us, but the Atlantis subs aren’t the windowless tin cans we’ve seen in films like “Crimson Tide” and “Run Silent, Run Deep.”

The two subs used for the Waikiki tours — one seats 64, the other, 48 — are lined with portholes.

I recently took a trip in the 64-passenger sub, which the company touts as “the world’s largest passenger submarine.” It’s the “premium” tour with “viewports having 65 percent greater viewing area” as compared with the 48-passenger sub.

Since I didn’t get to see the inside of that smaller sub, I can’t say whether it’s worth spending the extra 10 bucks for the premium ride, but I can say the view was spectacular from the big one.

Passengers are first shuttled out to the open bay by a double-decker tour boat. It’s kind of a treat to watch the submarine break through the surface of the water. The boat then cozies up beside it for loading and unloading. Two rows of passengers sit back to back in the sub, with each row facing large portholes. A digital gauge displays the sub’s depth at all times, which was never more than 107 feet during my trip.

The highlight of the tour is a series of reefs, which is where all the action takes place in waters of this depth. But they are artificial reefs, put in place to replace the natural reefs that have disappeared over 100 years from development, pollution and abuse.

Among the artificial reefs are two sunken ships. One is a former U.S. Navy oiler used during World War II and the Korean and Vietnam wars, which lies about two miles off Waikiki where it was scuttled in 1989 — the same year the Atlantis sub tours began here. The other is the San Pedro, a 90-foot former Korean fishing boat sunk in 1996.

The skeletons of two airplanes and four concrete-block “pyramids” also serve as reefs.

The reefs are home to a plethora of colorful fish, but you won’t see much of their color at this depth. The red, orange and yellow wavelengths of light are the first to be filtered out as the sunlight pierces the water, leaving everything looking blue.

The sea-life high points of my tour were three rays gliding in unison, a couple sharks and a very large sea turtle resting atop one of the pyramids. It seemed as though the sub was only a few feet away from the turtle.

Fish routinely appeared inches from the portholes, peering in at gaping passengers.

In between the reefs is a span of sea floor that makes you realize how much “land” lies under the Earth’s waters.

If I have a quibble with the tour, it’s that the sub never pauses at the reefs, which, let’s face it, are the most interesting places to view. I suppose that’s partly because the recorded audio headsets are somewhat timed to describe each reef, and partly because it takes a disciplined timetable to load and unload so many people to subs.

Sub tours are also offered from Maui and the Big Island.

For a taste of what it’s like inside the submarine, take a virtual tour of its interior at atlantisadventures.com/vt/oahu/tour.html. But you’ll have to use your imagination for sharks staring back at you.

The launch pier is located off the beach in front of Hilton Hawaiian Village Ali’i Tower on Waikiki Beach, which is just west of Fort Derussy Beach Park and the Hale Koa, the military’s hotel on Waikiki. Shuttle bus pickup is available at select hotels on Waikiki. There are no restrooms on the subs. TIMES

No food and beverages are served on the submarine, but snacks and drinks are sold on the shuttle boat between the pier and sub.