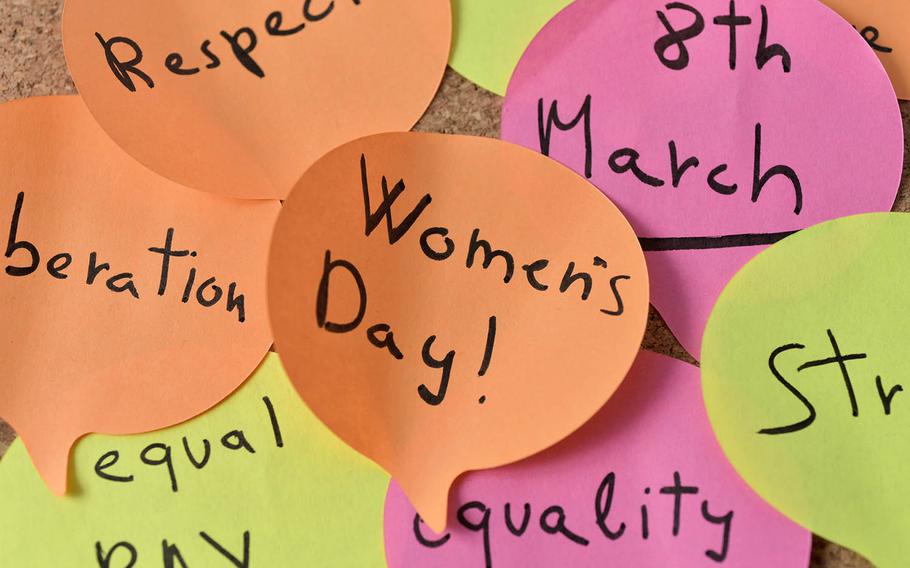 On March 8, International Women’s Day is celebrated, albeit much more noticeably in some countries than in others. In a country so instrumental to its founding, the date often seems to barely register in the public consciousness.

In the early 1900s, oppression and inequality spurred many women to become more vocal and active in their demands for social change. In 1908, some 15,000 women marched through New York City, demanding shorter working hours, better pay and the right to vote. On February 28, 1909, in accordance with a declaration made by the Socialist Party of America, the first National Woman's Day was observed across the U.S.A.

Here are a few places to look forward to visiting once coronavirus restrictions ease:

Top chef goes new ways in Bruges, BelgiumWhile women traditionally do the lion’s share of the cooking in the home environment, fine dining establishments headed by women remain rare. Chef Karen Keygnaert was the first woman chef in Belgium’s Flanders region to have garnered a Michelin star, but in 2017, she closed down the restaurant where she had earned it or order to open the Cantine Copine. Her reasoning behind the refusal was that stars come with specific expectations from diners, resulting in a loss of freedom for the cook. What was once a brush factory alongside a canal in storybook-perfect Bruges serves tasty food in a cozy bohemian space where the dress code is as relaxed as Keygnaert strives to make her diners feel. While lunches are set menus, dinner is served a la carte. The restaurant is located at Steenkaai 34. Online: cantinecopine.be

Germany’s female monastic master brewerSince 1869, the Poor Franciscan Sisters of the Holy Family have made their homes in an idyllic village in Bavaria’s Labertal Valley. For decades, the sisters of the Kloster Mallersdorf have been operating a brewery that turns out some 80,000 gallons of beer annually. Sister Doris Engelhard has headed the nunnery’s brewing operations since 1966, and is the country’s only female monastic master brewer. Born in 1949, Sister Doris entered the monastery’s school at the age of 13 and has remained attached to the convent with only a few short interruptions. The small operation brews malty lagers, along with various seasonal bock beers, from barley grown on the convent and hops sourced from the nearby Hallertau. On Fridays during the Lenten fasting season, the sisters subsist on a Maβ (liter) of the tasty suds each per day and no food. Visitors to the Klosterbräustüberl on the premises of the monastery need not restrict themselves to a liquid diet, as the pub serves soups, schnitzel, salad, and spätzle noodles alongside its brews. Online: klosterbraeustueberl-mallersdorf.de

Sister Doris is one of a handful of female brewers in Bavaria, many of whom work in establishments that have been in the same family for multiple generations. For profiles of other females at the helm of operations, see tinyurl.com/2mrzbwud

Female artists get their due in German museumsDas Verborgene Museum (The Hidden Museum) in Berlin-Charlottenburg stages exhibitions of the works of all-but-forgotten female artists of the 20th century. Since its founding more than three decades ago, dedicated art lovers have combed the basements and archives of West Berlin museums, estates and other facilities to find pieces worthy of restoration efforts and put them on display. Its collection of works from the late 19th and early 20th century spans painting, photography, sculpture, and architecture, and thanks to the museum’s efforts, more than 100 female artists have been returned to the public view. Das Verborgene Museum welcomes visitors only when hosting one of its temporary exhibitions, and is open Thursday through Sunday afternoons only. “Elective affinities – rendezvous with women photographers 1900-1935” is scheduled to run through March 28, although the museum remains closed at present. From April 22 through the end of Aug., “Mathilde Tardif – A panopticon of society around 1900” displays the work of this French painter for the first time ever in a solo exhibition. Online: dasverborgenemuseum.de

The Paula Modersohn-Becker Museum in Bremen was the first museum in the world to be dedicated to the work of a female painter. Modersohn-Becker, born in Dresden in 1876, studied painting in Berlin and Paris, where she developed a distinctive style of painting influenced by Paul Cézanne, Paul Gauguin and the Old Masters. A pioneer of European modern art, her works are known for their texture, tonality and ability to capture the essential character of the individuals portrayed. The building in which her masterpieces are displayed has served as a museum since 1927 and is considered one of the most important examples of Expressionist architecture in Germany. The museum’s opening hours are 11 a.m.-6 p.m. daily except for on Mondays; adult entry costs 10 euros. Online: boettcherstrasse.de

Festivals for and about womenBerlin biker Irene Kotnik is the driving force between what has in the fast few years become Europe’s biggest women-only motorbike festival. Petrolettes was founded with the goal of getting women interested in motorcycles and helping them to connect with one another. Attendees of previously organized meet-ups of female bikers have enjoyed workshops, concerts and racing their machines. A rally is scheduled to take place across several European cities from June 4-6, 2021. Online: petrolettes.com/rallly

The Women in Jazz Festival is a series of 22 events featuring jazz musicians hailing from Europe and those who have made the continent their home. From May 7-16, the German cities of Halle, Madgeburg and others host concerts featuring performers of rock, pop and ethnic music from Italy, Great Britain, France, Poland and other countries. The Next General Women in Jazz section shines a light on future jazz talents. Online: womeninjazz.de