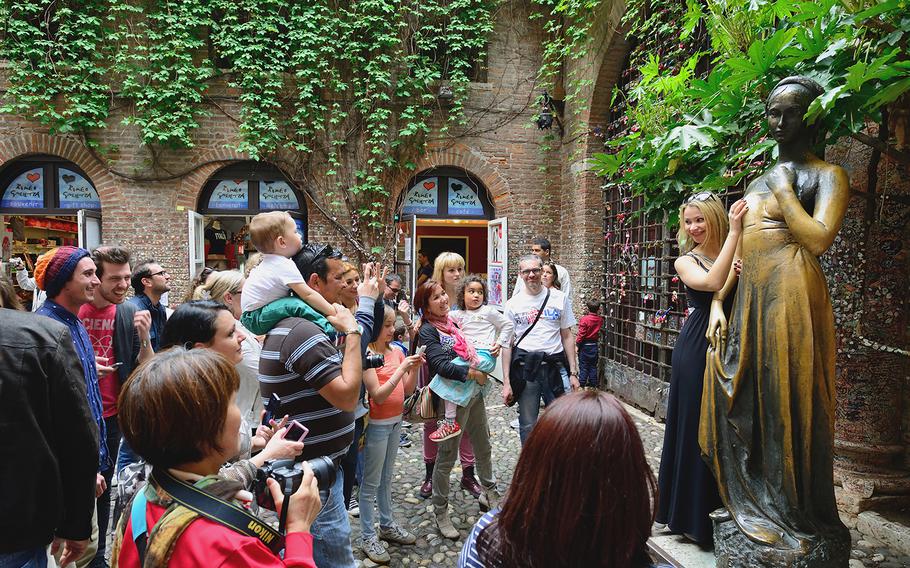 The Juliet statue in Verona, Italy, is one of the town's most popular and symbolic tourist attractions. Visitors take turns touching the right breast of the statue for luck. Or at least for a selfie. (iStock)

Happy birthday, Wills! William Shakespeare came into the world in Stratford-upon-Avon, England, in April 1564. Although his exact date of birth is disputed, April 23 is the day on which the world rejoices in the gift of his words that continue to inspire and delight.

The setting of Shakespearean plays against the most evocative of European backdrops could lead readers to believe he was a well-traveled gentleman; however, from most accounts of the Bard’s life, it is assumed he never set foot outside of England. His use of foreign cities as locales appears as a literary device to inject exoticism and perhaps even to avoid appearances of critiquing politics and society close to home.

With four centuries separating the works of Shakespeare from the present day, there’s been plenty of time to for associations of place to have taken on lives of their own. In this time of no travel, we too can pay virtual visits to some of the places mentioned in his works and examine the intersections between culture, legend, fantasy, marketing and tourism.

Verona, ItalyRomeo and Juliet opens with a prologue: “Two households, both alike in dignity, in fair Verona, where we lay our scene…” With its pretty riverside setting and wealth of archeological monuments including a colossal Roman amphitheater, fair the city was, and fair the city remains.

In 1846, Charles Dickens penned a travelogue titled “Pictures from Italy” in which he describes a visit to Verona’s sights associated with the star-crossed lovers’ tale. He termed the House of the Capulets, at that time a low-class hotel, “a most miserable little inn,” but delighted in the ancient convent garden in which Juliet’s tomb languished, nearly forgotten.

In 1905, the city of Verona purchased the house mentioned by Dickens, the former property of a family by the last name of Cappello. A local restorer recognized the property’s value as a sort of Shakespearean museum, and he was granted permission to begin renovations. In the late 1930s, some marble remains from a local museum were repurposed to build a balcony onto the 14th-century Gothic mansion, and a bronze statue of Juliet was erected in the courtyard in 1972. The custom of touching her right breast for luck in finding true love caught on, Juliet’s own tragic fate notwithstanding.

Tourists in Verona continue to drink up the city’s association with the universally known tragedy through visits to Juliet’s House, a museum displaying paintings, ceramics, period furniture and costumes; stops at Romeo’s House, Juliet’s Tomb and other alleged scenes of the famous drama. On the weekend closest to Valentine’s Day, “Verona in Love” invites couples to celebrate their bonds with various activities and special offers. The tradition of sticking up love letters in the courtyard of Juliet’s house, sometimes with chewing gum or Band-Aids, is no longer tolerated; doing so can result in a 500 euro fine. Online: verona.com/en/verona/casa-di-giulietta

Venice, ItalyThe Rialto, mentioned in The Merchant of Venice, is a Venetian site that can be visited to date, and the Palazzo Ducale is the likely setting of the play’s final courtroom scene. And Venice is one of the very few places that a character the likes of Shylock could have plausibly lived and carried out his trade.

On March 29, 1516, the government of the Serenissima Repubblica issued a set of laws establishing Europe’s first ghetto. The Jews compelled to live there could not leave the area from sunset to dawn, and to control their movements, the area was enclosed by gates and watched over by guards. The few professions open to Jews at the time included doctor, merchant and money lender. The ghetto existed until 1797, when Napoleon conquered Venice and ended the area’s separation from the rest of the city. Jewish residents were finally free to live in the places of their own choosing.

The “Ghetto Ebraico di Venezia” remains a fascinating place to visit. Tall buildings built in floors of shorter-than-usual height attest to the density of a population forced to live in a cramped space, and five synagogues, each used by a different ethnic group to have settled there, remain intact. The Jewish Museum of Venice brings to life the history of the ghetto’s past residents through displays of items made and used there, ancient books and manuscripts, and liturgical objects. In 2016, the ghetto celebrated the 500th anniversary of its establishment with exhibitions, lectures, and the first-ever production of The Merchant of Venice in its main square. Another highlight of the Venice Ghetto 500 program was a mock appeal on behalf of Shylock, heard before a jury of Judges presided over by The Honorable Ruth Bader Ginsburg, associate justice of the Supreme Court of the United States. The jury returned with a ruling in favor of Shylock, revoking confiscation of half his goods and forced conversion to Christianity. Online: ghetto.it

Helsingør, DenmarkShakespeare set his 1599 play Hamlet in Elsinore, the anglicized name of a port town on the northeastern coast of Denmark. On this strategic location overlooking a narrow straight vital to shipping, the business of collecting tolls proved lucrative. From 1574, King Frederick II of Denmark had a pre-existing fortress rebuilt into the magnificent Kronborg Castle. It’s believed that three members of Shakespeare’s acting company visited the castle to perform for the theater-loving Frederick; their first-hand knowledge would explain how Shakespeare was able to pepper his tale with such detail about the castle and its court life.

In 1816, to mark the 200th anniversary of Shakespeare’s death, Hamlet was performed at Kronborg Castle for the first time. This marked the beginning of a Shakespeare theater tradition. Sir Laurence Olivier, Vivien Leigh, Richard Burton, Michael Caine, Christopher Plummer, Donald Sutherland, Judi Dench and Jude Law are just a few of the great actors to have performed at Kronborg Castle through the years.

The Danish Shakespeare tradition remains strong to date. HamletScenen, Scandinavia’s largest Shakespeare theater company, actualizes and adapts Shakespeare’s eternal dramas to bring them to a diverse audience, and The Shakespeare Festival at Hamlet’s Castle Kronborg takes place under its aegis each year in August. International artists and audiences assemble in a purpose-built theater perched above the castle’s moat. And at any time of the year, visitors to the castle can enjoy a 45-minute tour titled “In Hamlet’s Footsteps.” Hamlet’s friend Horatio retells the drama as it could have played out in the grand halls and corridors of the imposing Renaissance structure. Online: tinyurl.com/xnbvuat9