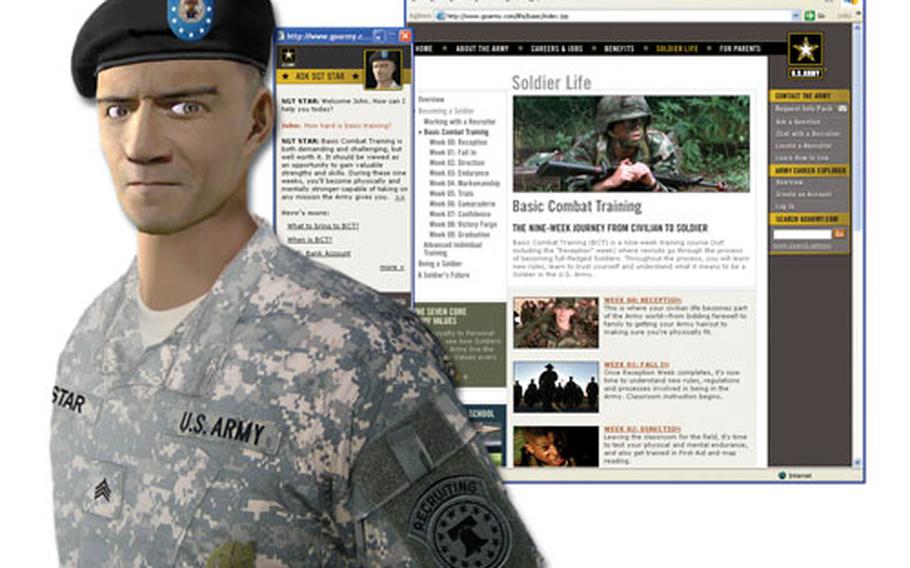 Sgt. STAR is the Internet avatar designed to encourage Web surfers to enlist in the Army. (U.S. Army)

The U.S. Army has enlisted the help of Sgt. STAR, an Internet avatar, to connect with a young crop of Web-crawling potential soldiers.

An Internet avatar, unlike those found in Hindu teachings, is an icon or representation in a shared virtual reality.

Ask him about her and he&#8217;ll tell you: she wears the pants in their relationship. Hooah!

But like most imitation people, it&#8217;s the details meant to make him seem human that make talking with him slightly disturbing.

Yes, talking with him. Sgt. STAR speaks. The following is an actual conversation with the Army&#8217;s avatar of recruitment.

SGT STAR: Welcome, Ben. How can I help you today?

Ben: I twisted my ankle the other day, and it still hurts.

SGT STAR: Yeah, some days are better than others. What can I answer for you about the Army?

Ben: Hey, I want to go in the Army, but I think the Air Force is better.

SGT STAR: The Army is the largest and oldest of all the branches of service. It&#8217;s self-contained, well-equipped and can be deployed anywhere in the world. As the largest branch, the Army offers the most competitive enlistment options, incentives and guarantees.

Ben: But what about the Air Force?

SGT STAR: The Army is the largest and oldest of all the branches of service. It&#8217;s self-contained, well-equipped and can be deployed anywhere in the world. As the largest branch, the Army offers the most competitive enlistment options, incentives and guarantees.

Ben: OK. I want to join, but I have a serious mental disorder.

SGT STAR: Here are some jobs in that category that might be of interest to you. Here&#8217;s more:

BCT: FitnessArmy Family, Bank ServicesMedical FacilitiesBen: So, I can still have a gun?

SGT STAR: During basic training, you will learn Basic Rifle Marksmanship and are required to qualify as marksman, sharpshooter or expert on the M16A2 rifle to graduate. Throughout your Army enlistment, you may be given opportunities to train on a variety of other weapons.

SGT STAR: Incredible, isn&#8217;t it? Is there anything else I can help you with?

Ben: Once I join, can I get stationed inside the Budweiser brewery?

SGT STAR: Army Posts offer a variety of facilities for Soldiers to do almost anything they want during their spare time. See this page for a list of possible facilities. [offers link]

Ben: Should we invade Canada?

SGT STAR: In some cases, Soldiers are offered a guaranteed location as an enlistment option based on MOS vacancies. All other Soldiers identify their preferences prior to the start of Basic Training. Your choices, along with your MOS and the needs of the Army, determine your first assignment.

Ben: Fair enough. However, I have a tangible fear of death. Is that a problem?

SGT STAR: If you rely on the training you receive in the Army, you will be prepared for any situation.

Ben: Even an uprising of the undead?

SGT STAR: Good question. I&#8217;m not sure how to answer that. Please try rewording your question. I understand simple questions best.

SGT STAR: Displayed below are answers that I believe are related to your question.

SGT STAR: That is a good question, however, I am not positive that I understand what you are asking.

Ben: Will joining give me medical benefits?

SGT STAR: The U.S. Army has one of the largest Health Care networks in the world.

SGT STAR: Thanks, I try.

For more, go to www.goarmy.com/flindex.jsp