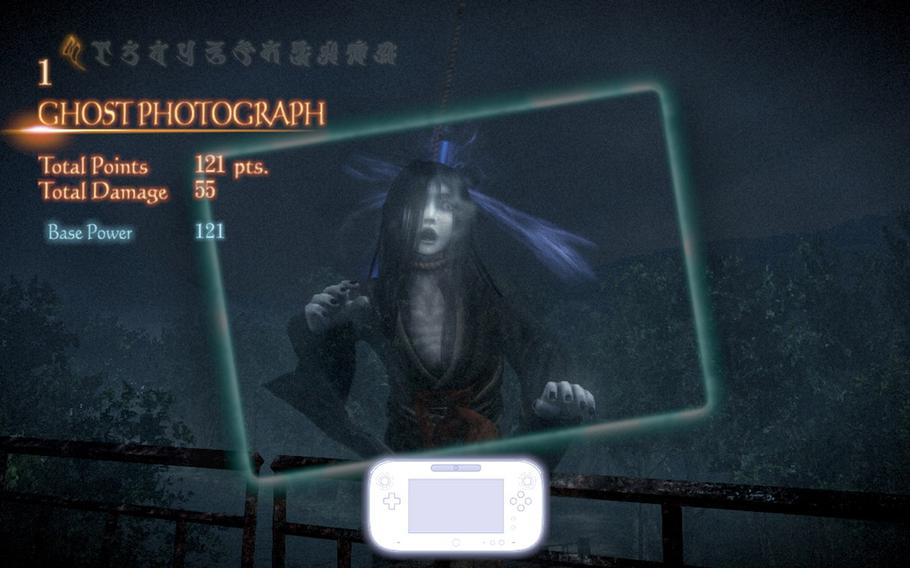 "Fatal Frame: Maiden of Black Water" follows the series' reliance on ghost photography as its main gameplay mechanic. The use of the Wii U gamepad as the camera adds a little extra zest to the combat. (Michael S. Darnell/Stars and Stripes)

"Fatal Frame: Maiden of Black Water" follows the series' reliance on ghost photography as its main gameplay mechanic. The use of the Wii U gamepad as the camera adds a little extra zest to the combat. (Michael S. Darnell/Stars and Stripes) 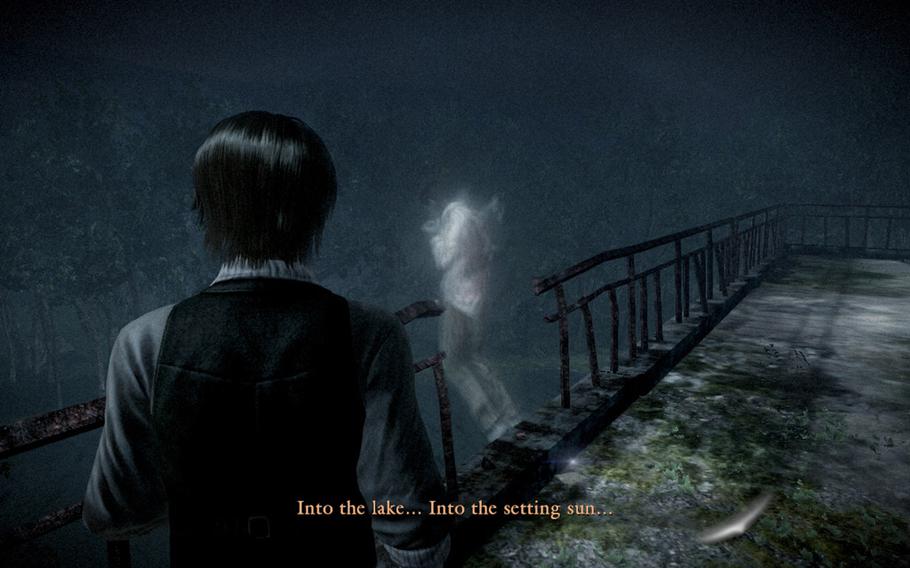 Not all of the ghosts in "Fatal Frame: Maiden of Black Water" are going to try to attack you. Some are just reliving the end of their life over and over again. (Michael S. Darnell/Stars and Stripes) 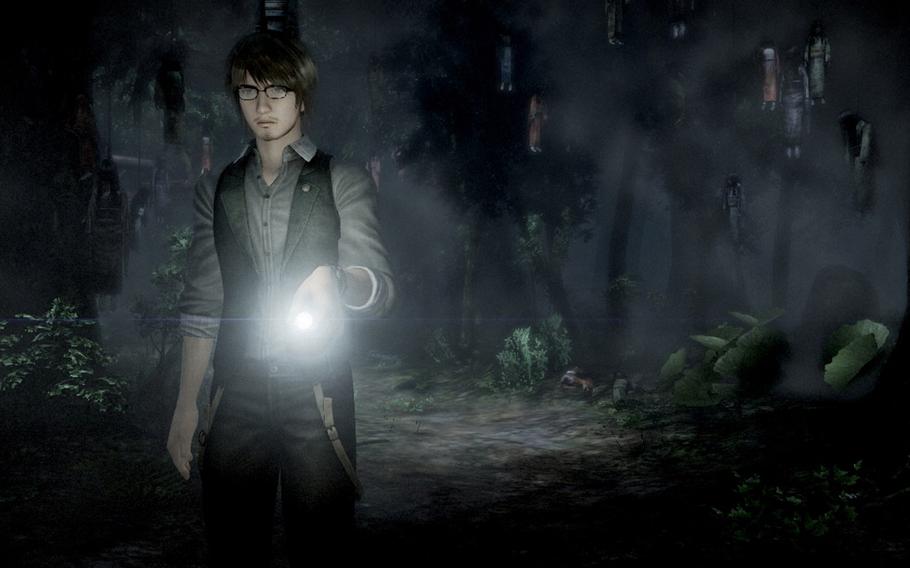 Repetitiveness in "Fatal Frame: Maiden of Black Water" becomes a real hindrance to the game's fun factor. The places that begin scary often end up being boring due to over-familiarity. (Michael S. Darnell/Stars and Stripes) 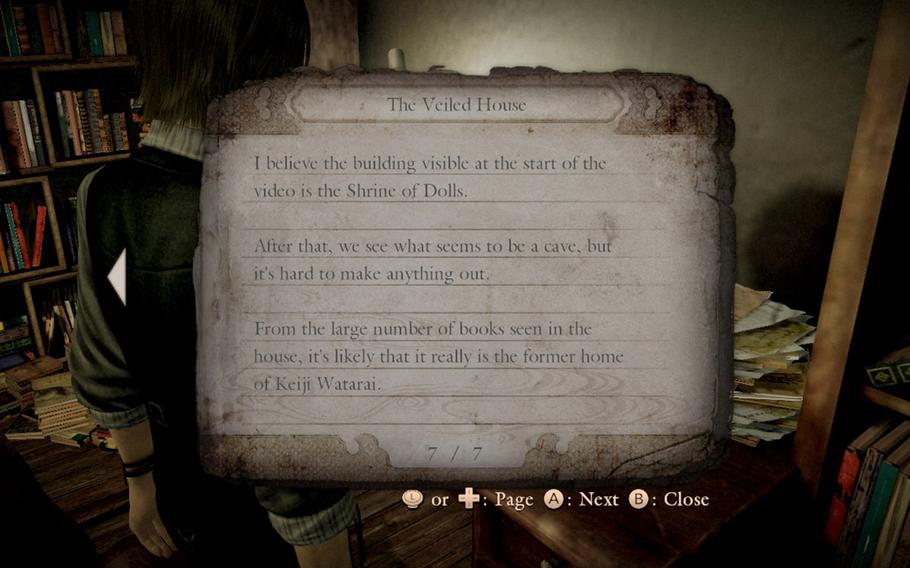 Much of the backstory of "Fatal Frame: Maiden of Black Water" is told through scraps of journals and other notes each of the three protagonists can pick up along their travels. () 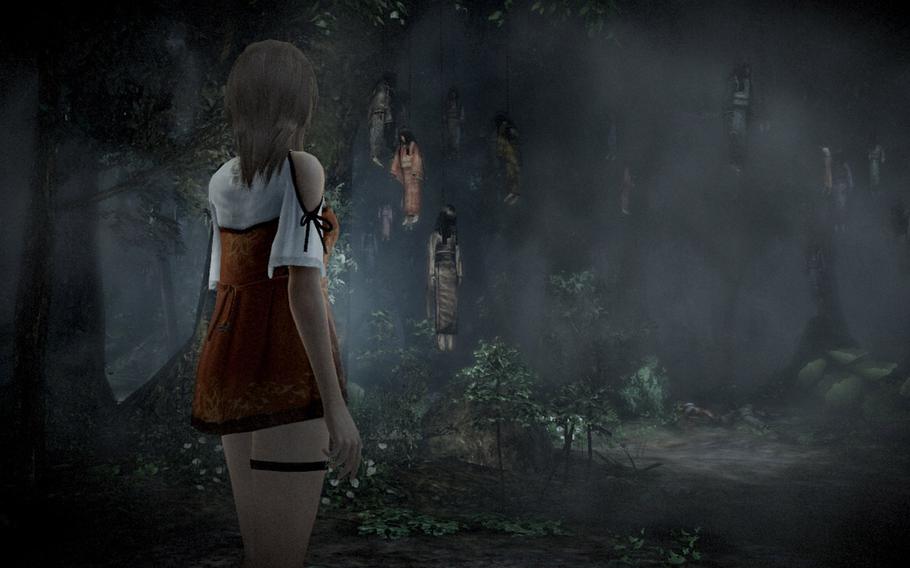 The creepiness of "Fatal Frame: Maiden of Black Water" is its main selling point. Of all the odd places you'll see, a haunted forest with dozens of hanging dolls is among the creepiest. (Michael S. Darnell/Stars and Stripes)

The “Fatal Frame” series was always just a little ahead of its time.

Back when the series debuted in North America in 2001, it did so during a time when other horror games were slowly ramping up the action elements. In a sea of “Resident Evil” clones, “Fatal Frame” took a slightly more divergent path, leaving behind the zombies and explosions and picking up a slower, more methodical pace.

Rather than battling enemies with a shotgun and a quip, the “Fatal Frame” protagonists tackled the supernatural with nothing more than a camera. In ditching what was the established formula at the time, “Fatal Frame” really set itself apart from its peers.

That’s likely the reason why the series cultivated a rabid fanbase that is clearly the target audience for the recent Wii U addition to the series, “Maiden of Black Water.”

For those new to the series — and that might be many of you, considering its previous North American release was a Nintendo DS-only title in 2012 — “Fatal Frame” continues along the path its predecessors forged.

“Maiden” follows the three different protagonists who live near the fictional haunted Hikami Mountain. Famed for its spiritual connections and ties to ritualistic suicides, the mountain had become popular among occultists and thrill seekers alike.

As events unfold, the three protagonists — Yuuri Kozukata, Ren Hojo and Miu Hinasaki — find themselves entangled in the dark history of the mountain and its resident spirits. Though the game does have some nominal nods toward the city at the base of the mountain, most of the game takes place at Hikami and its dilapidated buildings.

Hikami is appropriately spooky. A thick, oppressive fog drapes dark, creaking woods. The resort that was once filled with tourists is now broken down and abandoned. Ghosts pop up out of walls or hang from ethereal gibbets. As scary games go, if ghosts are what get your hairs to raise, “Maiden” nails the scares.

At least at first.

The problem with Hikami Mountain isn’t that it’s not scary. Ultimately, it’s just a mountain. Meaning it’s entirely avoidable. How many times would even the most stalwart investigator be grabbed by an unkillable ghost before saying “You know what? Maybe I won’t go to the haunted mountain today. I’ll go get some mochi instead.”

Of course, the game continues to find reasons why each protagonist has to return to the same, tired haunting ground. This usually involves one of the side characters going missing and being kidnapped by a malevolent spirit. This happens so much that it becomes almost comical.

What’s even worse is that when you switch up playable characters, you’ll more often than not be retreading the same areas you visited with a prior character. Repetitiveness, mixed with a silly premise, ends up toward the end killing what scares there were at the beginning.

That repetitiveness leaks into the basic gameplay mechanics, as well.

To combat the less than friendly ghosts, each hero has at his or her disposal a “camera obscura,” which I believe is Latin for “Camera that kills ghosts dead.” I might be wrong there. Regardless, in this game, the camera acts as each protagonist’s sole weapon.

When a malevolent spirit pops up, players will be locked into combat with the ghoulie. Using the Wii U gamepad as the camera, players will have to try to get five focal points within the camera’s view lens.

In essence, players will spend much of their time “ghost hunting” around their own living rooms. It’s a neat little addition that adds to the overall immersiveness of the title. It can be sidestepped by the more sedentary gamers by using the thumbsticks to move the camera around.

Outside of that, the combat is relatively simple. A good picture that has all focal points in it causes massive damage. Lesser photos do less damage. Different rolls of film can be picked along the way or purchased with experience points before each level begins, with each roll having unique balances of damage output and reload times.

Each protagonist has a slightly different camera obscura with lenses that have different game effects. Some deal extra damage, some regain health and so forth. Basically, the combat is really simple and easy to pick up.

Conversely, it also becomes repetitive very quickly, which isn’t as much of a big deal until the game begins to ramp up encounters toward the end. At that point, there is a seemingly endless parade of battles, each more drawn out than the last.

There is also a mechanic that doesn’t seem to work as advertised. As the protagonists get wet — by wading through water for instance — a “wetness meter” fills. As it does, you’re supposed to see more ghost attacks. A special item can be used to instantly dry off, but as I never really saw any difference in encounters, I never really had to use it.

The first few hours of “Maiden” make it seem almost like a game of the year contender. But as repetition sets in, with character motivations, locations and combat, the shine begins to dull. In the end, what we’re left with is a nice addition to a series that was the progenitor to the slower-paced horror games that we see more of today.

“Maiden of Black Water” holds true to that pedigree, for the most part. It’s still scary and atmospheric, and there is plenty of fun to be had ghost hunting with the Wii U pad. It’s just a shame that repetition turns what could have been a fun monster-of-the-week episode into a rerun.

Nintendo provided a copy of this game for review.