'Ryse' is eye candy with a side of monotony 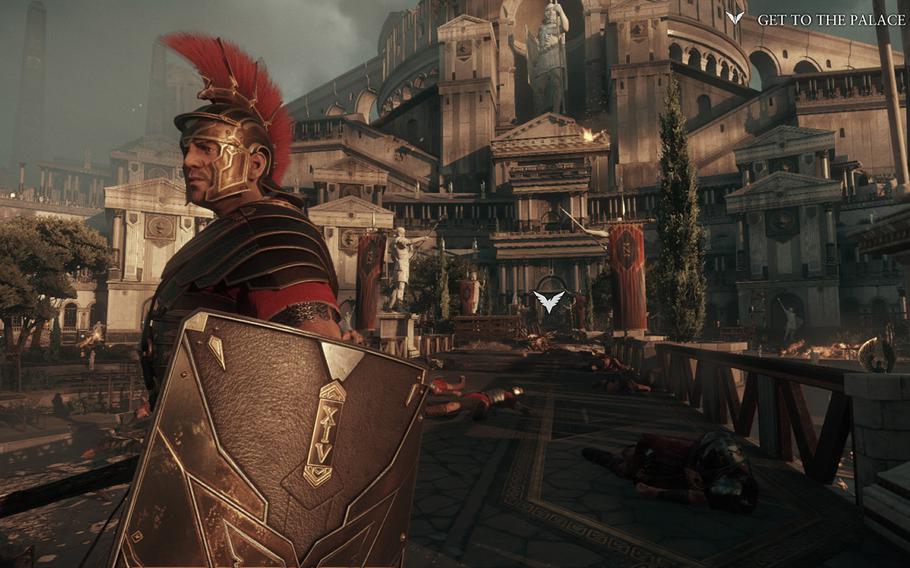 “Ryse: Son of Rome” delivers stellar graphics and an interesting story, but can get bogged down by repetitive gameplay. (Courtesy of Crytek)

“Ryse: Son of Rome” delivers stellar graphics and an interesting story, but can get bogged down by repetitive gameplay. (Courtesy of Crytek) 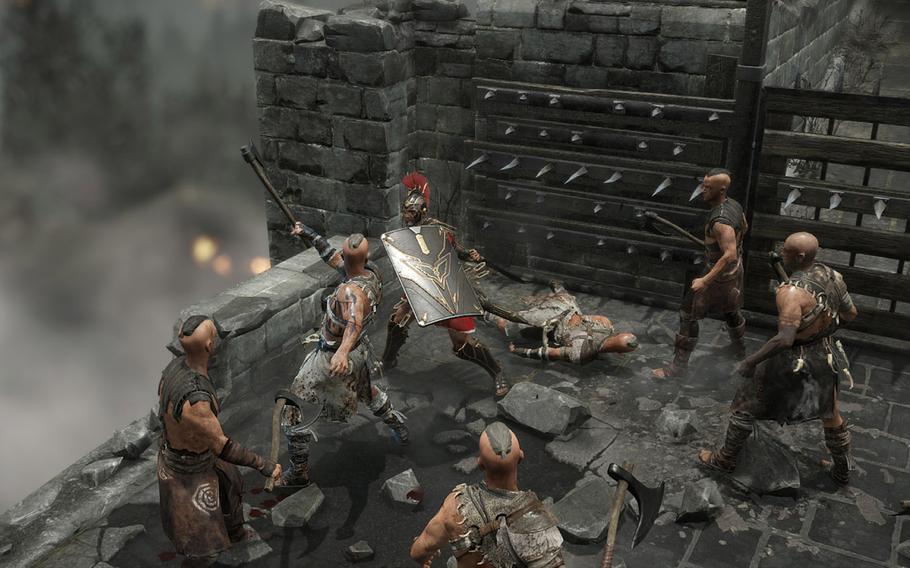 Marius marches into battle amid a formation of legionaries, each equipped with a rectangular shield, javelin-like pila and sword. If enemy archers launch a volley, Marius and his companions can link their shields to ward off the attack. Between volleys, Marius and crew throw their pila and advance on their foes. (Courtesy of Crytek) 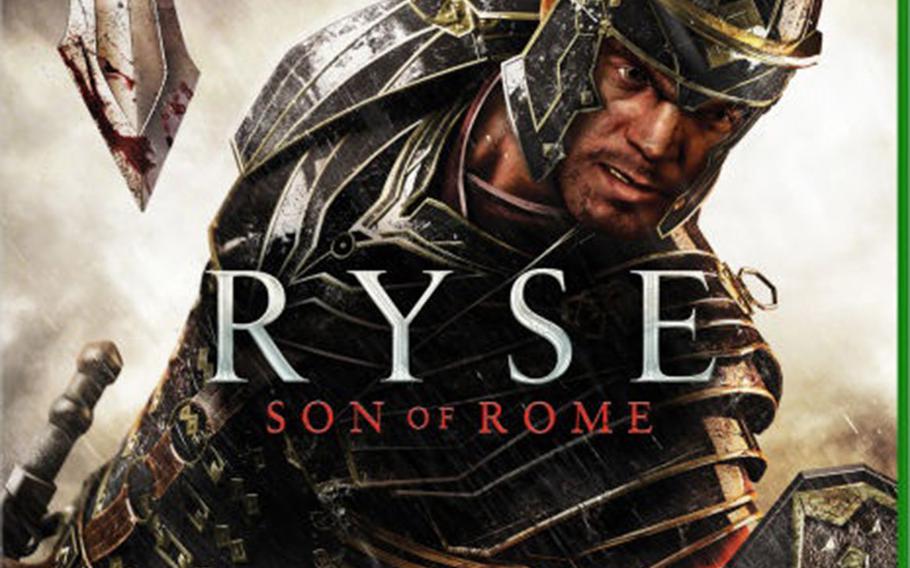 Ever since taking Professor Harvey’s ancient history class in college, I’ve been fascinated with Rome. Books, movies, visits to the Eternal City and a handful of ancient coins sparked my imagination further.

But it wasn’t until playing “Ryse: Son of Rome” that I finally got the chance to become a legionary and face the barbarian hordes.

In the game developed by Crytek for Microsoft Studios, you play as Marius Titus, a Roman soldier during the time of Nero. After his family is slaughtered by British barbarians, Marius begins a quest for vengeance.

The adventure unfolds in one of the most visually impressive games ever to appear on a console. Characters’ faces are incredibly lifelike, and the animations are fluid and realistic. The settings — especially in Rome — can be breathtaking. And everything from dinner tables to barbarian warriors is covered in detail. At times, I thought, “This is surely how Rome looked in 60 A.D.”

However, much like the Roman Empire itself, “Ryse” looks better than it really is.

The game immediately brings to mind PlayStation’s “God of War” franchise, which features Kratos, a mythological Spartan who battles all sorts of fanciful creatures. That game is best known for a combat system that relies heavily on quick videos launched by hitting a sequence of buttons. It offers some good puzzles to solve but focuses primarily on the fighting — and that can get pretty tedious.

On the other hand, “Ryse” is based on reality — though it contains enough anachronisms and historical errors to fill the Roman Forum. And its fighting mechanics are pretty good.

At times, Marius’ tactics are a reasonable facsimile of those described by good old Professor Harvey. Marius marches into battle amid a formation of legionaries, each equipped with a rectangular shield, javelin-like pila and sword. If enemy archers launch a volley, Marius and his companions can link their shields to ward off the attack. Between volleys, Marius and crew throw their pila and advance on their foes.

However, in most cases, Marius is forced into action without his comrades by his side. And even when fighting starts with a formation of legionaries, Marius and his companions soon break off to face their foes in single combat. While historically implausible, it is much more interesting.

In most cases, Marius has just three weapons at his disposal: sword, shield and pila. He can also dodge and block enemy blows. These weapons and evasive maneuvers can get Marius through many situations, but his foes will eventually connect with a few swings and reduce Marius’ health. The only way to regain health is the perform execution moves.

An execution move becomes available after you hack at an enemy a few times. A skull will appear over his head, giving you the queue to hit the execution button. The enemy will then flash blue or yellow, indicating which button to hit next. Generally, you have to hit two buttons to initiate the full move. The quicker you respond, the more points you earn — and the more extravagant the resulting video clip. The videos last about two seconds but can be pretty gory — arms or legs lopped off or throats slit — so it’s not a game for the squeamish.

After a sufficient number of kills, you build up the energy to unleash a special attack that knocks your enemies back and opens them up to a devastating flurry of blows.

In addition to hurling pila and swinging swords, Marius gets a few chances to fire ballistas to take down barbarians. And amid the swordplay, he can also call for a volley of arrows from friendly archers. This can be accomplished through pressing a button or by issuing a voice command using the Xbox’s Kinect. The Kinect sensor is surprisingly responsive.

This all seems pretty good until you realize: This is all there is to the fighting mechanics.

Marius might be placed in a wide variety of circumstances, in many interesting locations — all beautifully rendered — but there’s not much new for Marius to do after you’ve played the game for about an hour. While you can unlock new execution videos, the basic tactics and moves are pretty much the same from beginning to end. As a result, the game can feel somewhat monotonous at points. Throwing in a few puzzles, some stealth missions or unusual activities also would have helped to break things up.

Another big problem is that there’s very little diversity among the enemy characters. It’s pretty common to fight identical triplets who look exactly like the identical twins you fought a minute earlier.

In addition, Marius isn’t a particularly deep or interesting guy. He comes across as the quintessential cog in the Roman war machine. Many of the surrounding characters are much more interesting, especially the aging Emperor Nero and his loathsome sons. While Professor Harvey would point out that Nero actually died at age 30 — and quite sonless — it’s the sort of embellishment that keeps the story interesting despite the grim Marius.

At this point, I should note that some of my gaming companions were very impressed with “Ryse.” One said he’d give it a 9.5 out of 10. Another said it’s one of the top three console games he’s ever played — but he’s a fan of “League of Legends,” so he’s used to repetitive gameplay.

While they thoroughly enjoyed the single-player campaign, they especially liked the online mode. This allows you to join another gamer in the arena as a gladiator, cooperatively fighting off wave after wave of barbarians.

The fighting mechanics are the same as those in the campaign. However, developers mix things up a bit in many matches by offering different challenges. For example, you’ll need to defend key areas, chase down messengers or destroy catapults by knocking over vats of flaming oil. In many areas, you also have the ability to knock foes into wooden spikes or into pits.

But even here, I think developers missed an opportunity to provide some satisfying diversity. The Romans employed several different kinds of gladiators, each with different armor, weapons and tactics. For example, the “retiarius” fought with a trident and a net, which would have offered very different options for taking down your foes.

If I asked Professor Harvey what he thought of all of this, he’d probably laugh. He was always forgiving of Rome’s depiction in pop culture. But he also would point out that the game developers were a wee bit wrong to have the British leading a pack of rampaging pachyderms through the streets of Rome.

Bottom line: “Ryse: Son of Rome” delivers stellar graphics and an interesting story, but can get bogged down by repetitive gameplay.