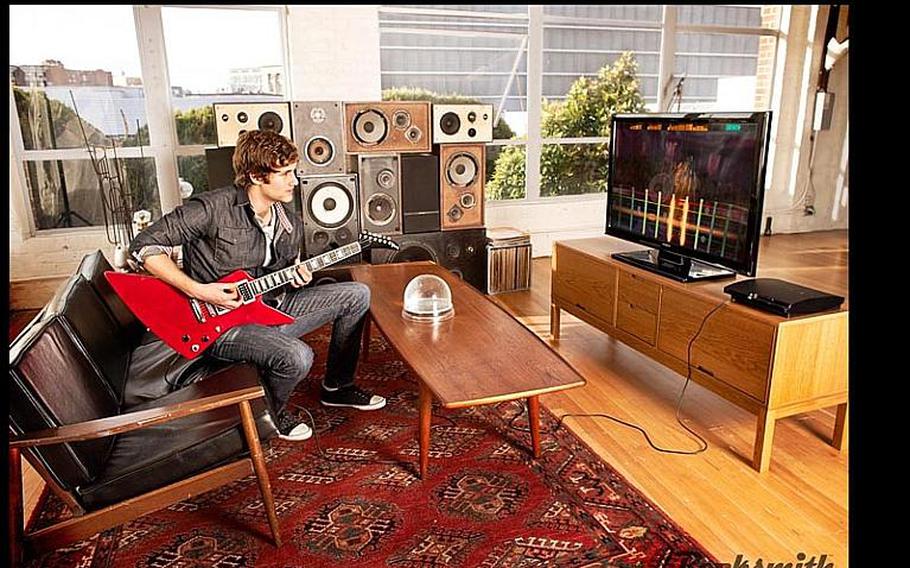 'Rocksmith' lets you plug a genuine guitar into your console and rock out. (Elfi Chester/Ubisoft)

“Guitar Hero” just doesn’t seem very heroic these days. However, there’s hope for those who want to move beyond the plastic instruments and colorful buttons.

Ubisoft’s “Rocksmith” lets you plug a genuine guitar into your console and strum away. The console acts as your guitar’s amplifier. It’s an awesome step forward — but only if you have your own guitar or are interested in investing in one.

At first glance, the game bears a resemblance to previous rhythm games. Notes represented by colored rectangles or lines flow from the top to the bottom of the TV screen. Each color corresponds to one of the guitar’s six strings. Each note also follows a channel that corresponds with one of the frets on a guitar. You strike the string when it hits the bottom of the screen. Overall, it does a great job of conveying the proper string, fret and timing.

If you mess up, the game gently corrects you with flashing arrows pointing in the direction of the correct fret or string.

Of course it’s a system that draws more from the world of games than the world of music, so it will be a bit unfamiliar to those used to reading music or guitar tabs. Also, the display might seem “upside down” to experienced players who are used to looking at guitar strings from above. The “Rocksmith” display shows the strings from the rear as if the guitar neck were invisible. It’s not a big deal but takes a few songs to get used to.

One of the nicest aspects of the game is how it gauges your skill level on the fly and adjusts its difficulty to match your ability. Beginners will face a slow, steady flow of single notes. Advanced players will be confronted with a veritable torrent of varying notes and chords.

“Rocksmith” offers a sort of campaign that introduces new songs, skills and techniques as it progresses. You can also jump right into a song and pluck, strum or shred to your heart’s content. After completing a song, you can listen to your performance, a pretty scary proposition in many cases.

This all seemed great as far as I could take it. Unfortunately, anything beyond the early stages was beyond my ability because of a torn finger tendon that ended my guitar “career” about three years ago. For help in completing the review, I turned to Keith Owens, the guitar teacher at West Springfield High School in Fairfax County, Va.

Owens spent more than an hour testing the game’s various features. Although he detected a few issues with lag and sensitivity, he had a lot of fun.

And while “Rocksmith” doesn’t cover all of the instruction needed to master the instrument, Owens said the game should be very good for encouraging practice and skill development.

“It won’t make any guitar teachers lose their jobs,” Owens said, “but it might do what they were hoping it would do: Turn some ‘Guitar Hero’ players into guitar players.”

His bottom line: He’s going to buy a copy.

The game comes with a cable to connect your guitar to your console and a set of stickers to help newcomers quickly identify which fret is which. Because of the cable, the game costs $80. It’s also available bundled with an electric guitar for $200.

The game’s biggest flaw lies in its initial song catalog. It ranges from the 1964 hit “House of the Rising Sun” by the Animals to the RapScallions’ “California Brain” from earlier this year. In the future, you will be able to download additional material, but it’s hard to believe Ubisoft will offer a catalog as impressive as that of “Rock Band” anytime soon.

Bottom line: A- Whether you’re serious about brushing up your guitar skills or just want to rock out with some friends, it’s time to plug a real guitar into your console.