Rock survivor Alice in Chains surges back to success 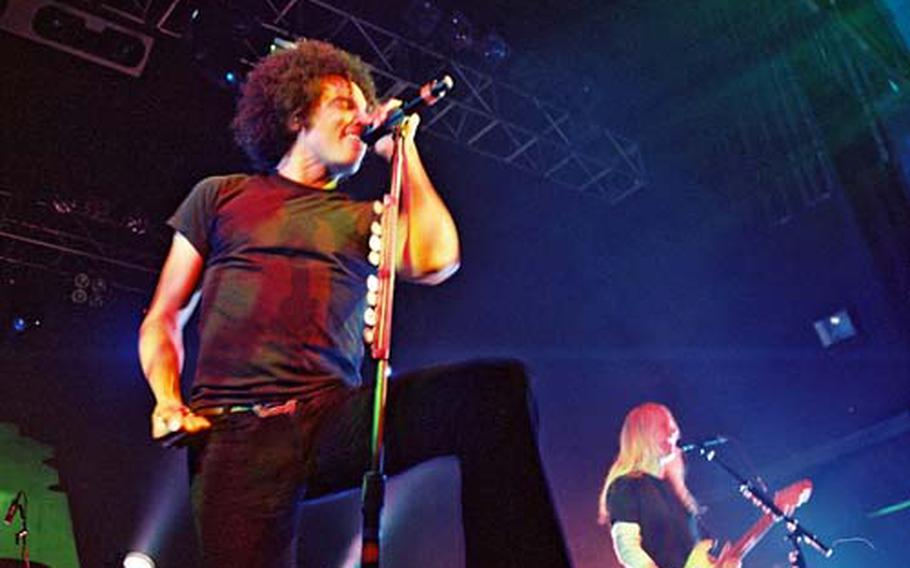 Newcomer William DuVall, left, takes on the lead vocals formerly sung by Layne Staley in Alice in Chains. Guitarist Jerry Cantrell, right, plays during the group’s recent performance at the Forum in London. (DeeDee Doke/special to Stars and Stripes)

Along with Alice in Chains, the catalog of so-called grunge bands included collectives as musically diverse as Nirvana, Mudhoney, the Melvins, Pearl Jam and Screaming Trees.

Today, rock &#8217;n&#8217; roll survivors is a more apt description of Cantrell and his longtime bandmates: bassist Mike Ines and drummer Sean Kinney. This year, joined by new vocalist/rhythm guitarist William DuVall, the original three have found their way back to sold-out concerts, a No. 1 single (&#8220;Check My Brain&#8221;) and an album, &#8220;Black Gives Way to Blue,&#8221; that reached No. 5 seven years after the death of lead singer Layne Staley from a heroin overdose.

Cantrell is speaking backstage at the Forum music venue in north London, where the band played two consecutive nights in mid-November following gigs in Glasgow, Scotland, and Manchester and Birmingham, England, and before dates in Italy, Switzerland and France. Drummer Kinney is suffering from a bad case of flu. Cantrell has had to see a doctor for a painful back. But true to the Alice in Chains spirit, the shows go on.

Lyrically, the new album hints at a lightening of the band&#8217;s mental load. However, Alice in Chains&#8217; signature moodiness remains intact, along with the sublime aural warning created by discordant, dissonant harmonies and guitar work that something is about to go very wrong.

&#8220;I think that there are plenty of the darker elements &#8212; that&#8217;s just collectively how we are,&#8221; Cantrell says. &#8220;It&#8217;s about the whole enchilada, you know what I mean? It was never all negative, although maybe we touched on things that were a little deeper, a little more unspoken on a human level, or the things that maybe are a little uglier about humanity, or maybe just personal stuff inside you that you are challenged by. That always appealed to us. We always dug deeper.

&#8220;Maybe the balance has shifted a little bit, but I also feel that a lot of the music before kind of got tagged with that negativity, and that they were all drug songs. That&#8217;s unfortunate, because there were a lot of positive aspects to a lot of the darker things we wrote about, and there was always a real survivor element.

military connectionAlice in Chains guitarist-composer-singer Jerry Cantrell opted for a career in music instead of following his soldier father (the inspiration for &#8220;Rooster,&#8221; one of the band&#8217;s signature songs) into the military, but he finds a few similarities between the two professions.

All members of the current lineup &#8212; vocalist/rhythm guitarist William DuVall, bassist Mike Ines and drummer Sean Kinney, along with Cantrell &#8212; come from military families. Born in Tacoma, Wash., Cantrell spent many childhood and teen years in suburban Tacoma near Fort Lewis. His father&#8217;s military career also had the family living in Alabama, Alaska and Pennsylvania.