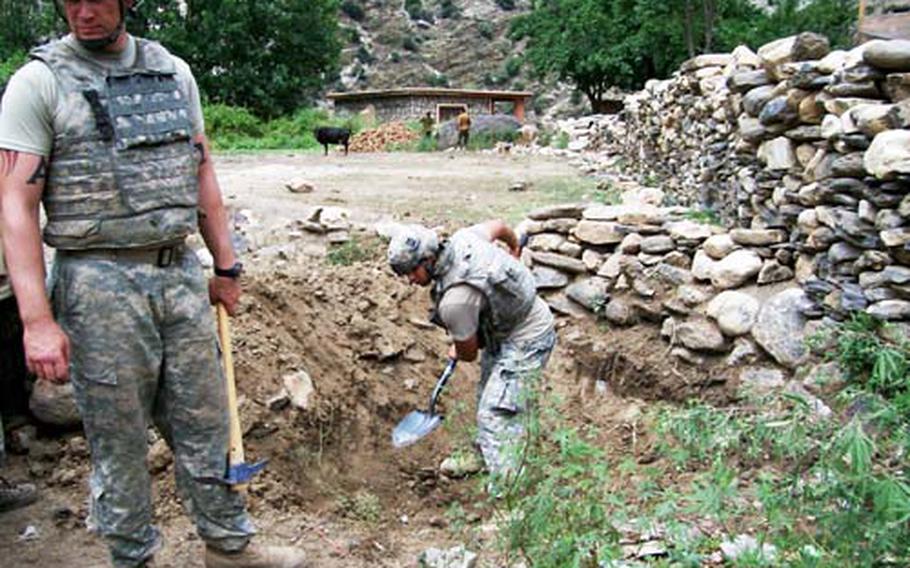 Members of the 2nd Battalion, 503rd Infantry Regiment dig a fighting position in Wanat, Afghanistan. In July 2008, nine members of the unit were killed in an intense firefight when some 200 insurgents attacked their vehicle patrol base. (Courtesy of the U.S. Army)

The 2nd Battalion, 503rd Infantry Regiment has a storied history, with long entries dedicated to World War II and Vietnam.

Formed in 1941, the battalion is credited with the first combat jump in U.S. Army history, according to its own historical records. Paratroops touched the ground in Algeria on Nov. 8, 1942. It went on to make three more jumps during World War II, including on Corregidor island in the Phillipines. That battle earned the battalion its nickname, "The Rock."

The 2-503rd was part of the 173rd Airborne Brigade in Vietnam and was among the first Army units deployed to the country. It conducted the sole large-scale airborne drop in Vietnam on Feb. 22, 1967.

Soldiers continue to receive valor awards for their actions during the tour, with at least a handful of nominations for the highest honors still pending decisions at the Pentagon. To date, soldiers who served in the battalion during the rotation have received:

One Distinguished Service Cross25 Silver Stars90 Bronze Stars with "V" device for valor308 Army Commendation Medals with valorLt. Col. Nathan Banks, an Army spokesman at the Pentagon, called that "very, very impressive." But the military doesn&#8217;t track which units have been the most decorated in battle, he said.

Not that then-Lt. Col. Bill Ostlund, the battalion commander in Afghanistan, or Lt. Col. Bill Butler, the current commander, are counting. Ostlund, who has since been promoted to colonel, was too busy with other duties in Afghanistan. His soldiers were involved in more than 900 battles &#8212; an average of more than two a day &#8212; and he said in an interview that fighting was only about 10 percent of what his troops did in country. And Butler is busy getting a battalion full of new personnel ready for its next deployment.

Part of the battalion&#8217;s situation was due to its location. Kunar province in eastern Afghanistan had seen a battalion-size element of U.S. forces only for a few months before 2-503 arrived. So they were tested &#8212; constantly. Fighting was especially intense in the summer months near the beginning of the deployment, with an average of five contacts a day in one stretch.

A month before leaving Afghanistan, the battalion already had six Silver Star recipients &#8212; one more than it received during its rotation in 2005 to 2006 in Zabul province in southern Afghanistan. And that rotation had stood out for the high number of valorous actions. One of those valor medal recipients, Sgt. 1st Class Matthew Blaskowski, died Sept. 23, 2007, during the latest deployment. He wouldn&#8217;t be the last valor medal recipient to die during the tour.

Ostlund, who is currently deputy commander of the 75th Ranger Regiment at Fort Benning, Ga., had some sense of history during an interview at his headquarters in Afghanistan near the end of the tour.

The interview took place a few weeks before the deadliest battle of the tour. Nine members of Chosen Company lost their lives while defending a vehicle patrol base in Wanat in eastern Afghanistan &#8212; only about four and a half miles from the battalion headquarters at Camp Blessing.

Before then, though, the battalion had already lost 15 soldiers and Ostlund had plenty of other engagements to talk about.

He recalled a fight on July 5, 2007, near Tsangar. Troops had flown at night into an area held by insurgents and were attacked the next morning. Two soldiers were killed and five were wounded. Staff Sgts. Matthew Coulter and Robert Smith were awarded Silver Stars.

Staff Sgts. Christopher Charo and Christopher Upp received Silver Stars for their actions on an attack on Vehicle Patrol Base Seray on July 31, 2007.

A platoon-size element fought off an attempt to overrun their compound &#8212; which they dubbed the Ranch House &#8212; on Aug. 22, 2007. Sgt. 1st Class Erich Phillips, then a staff sergeant, earned the Distinguished Service Cross and Spc. Jason Baldwin and Capt. Matthew Ferrara received Silver Stars.

Ferrara would be one of five men killed in an ambush Nov. 9, 2007, after they had met with village leaders in Aranus and agreed to fund a local improvement project.

It&#8217;s not easy to get a soldier from the battalion to talk about himself, though.

Phillips earned a Silver Star for his actions in Wanat. Combined with the DSC he had earned earlier, it makes him one of most decorated soldiers in today&#8217;s Army.

After receiving his DSC at a ceremony in Vicenza, Italy, Phillips wanted to shift the conversation.

"Those guys fought really hard that day," he said of his comrades.

"I would definitely like to thank them for allowing me to fight alongside them and being in the presence of those great men."