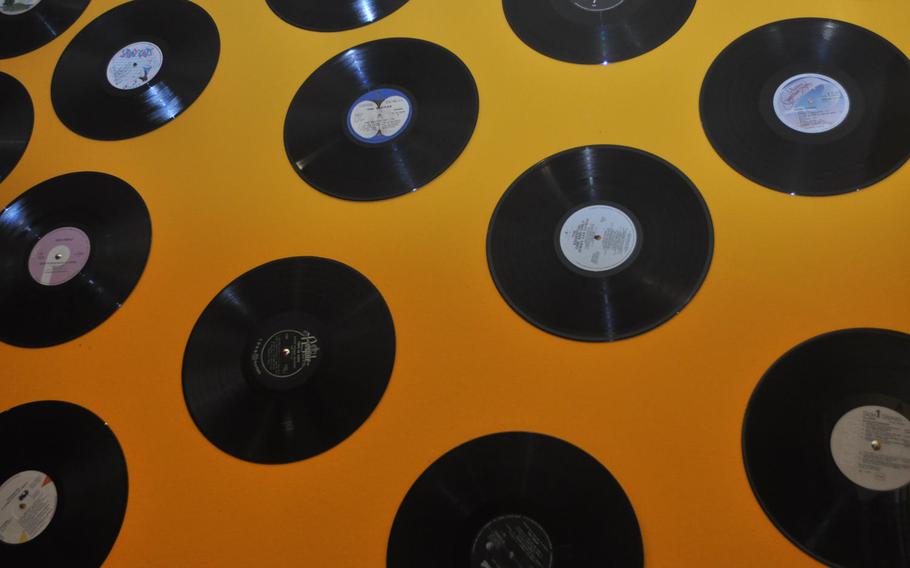 Buy Photo
Copies of records, many of them from American or British artists from the 1950s or 1960s, line a wall at Rico's. (Kent Harris/Stars and Stripes)

Buy Photo
Copies of records, many of them from American or British artists from the 1950s or 1960s, line a wall at Rico's. (Kent Harris/Stars and Stripes) 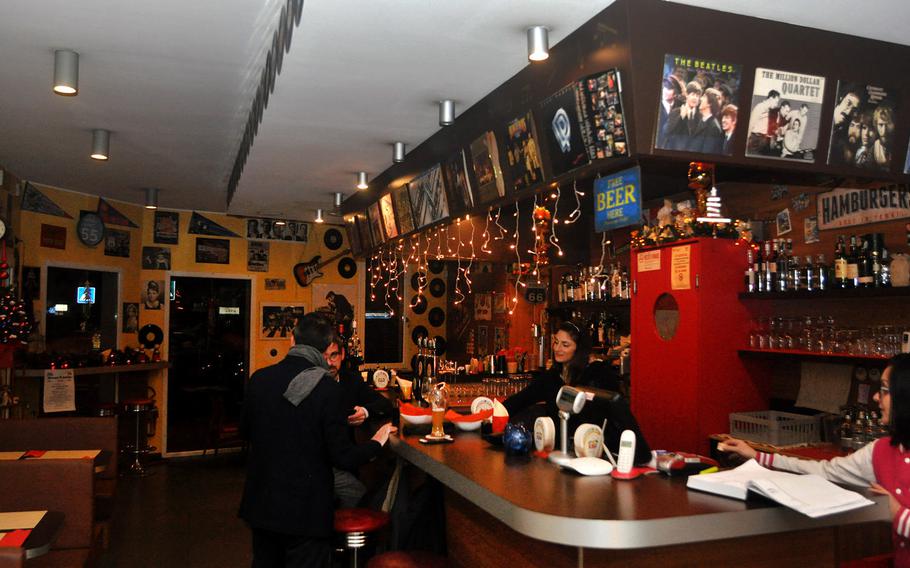 Buy Photo
The front room at Rico's has a bar and some seating. As with many Italian dining establishments, if you show up just after 7 p.m., you largely have the place to yourself. It gets busier as the night goes along. (Kent Harris/Stars and Stripes) 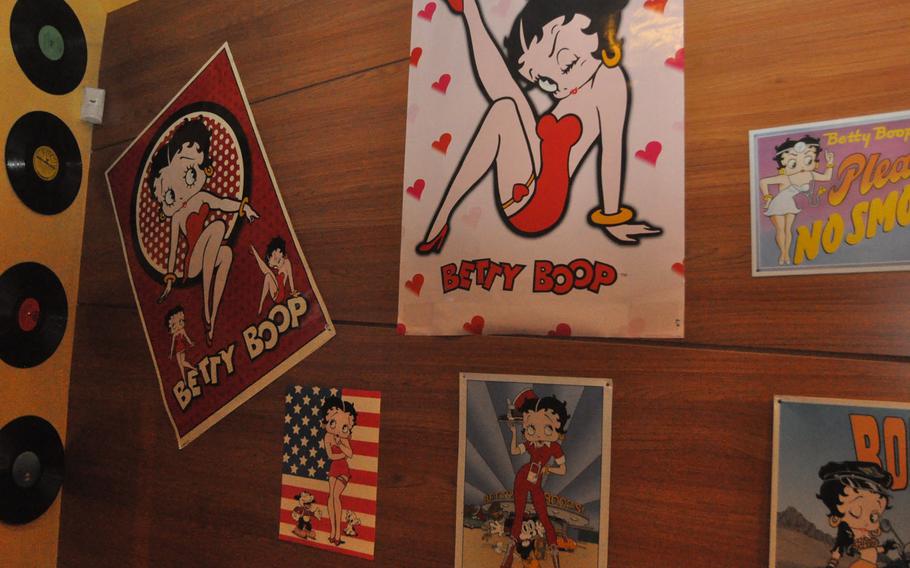 Buy Photo
Rico's, in Pordenone, Italy, features an array of memorabilia on the walls from the United States or Great Britain. With its main focus on the 1950s and 1960s, a lot of it could predate the customers who might choose to dine there. (Kent Harris/Stars and Stripes) 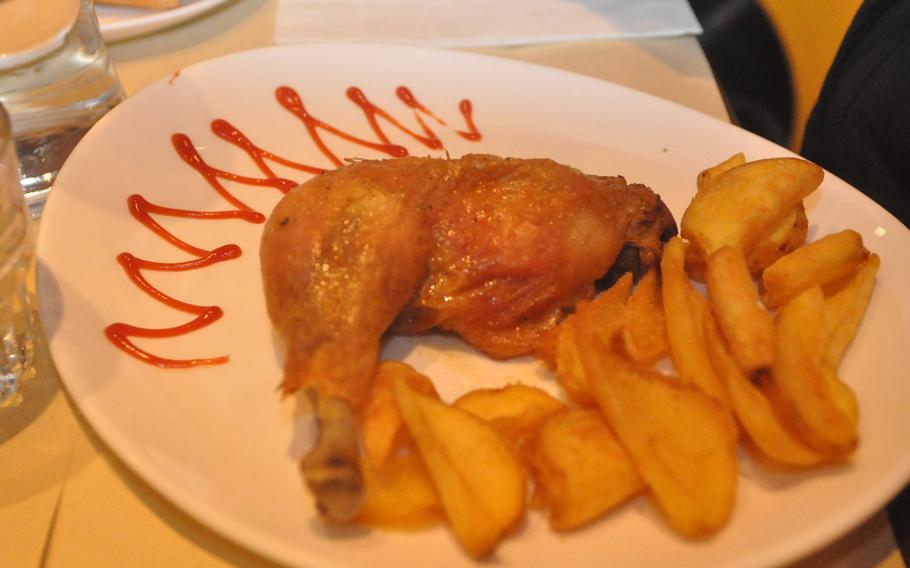 Buy Photo
There's a small menu for cihildren at Rico's featuring items such as this leg of chicken with French fries. (Kent Harris/Stars and Stripes) 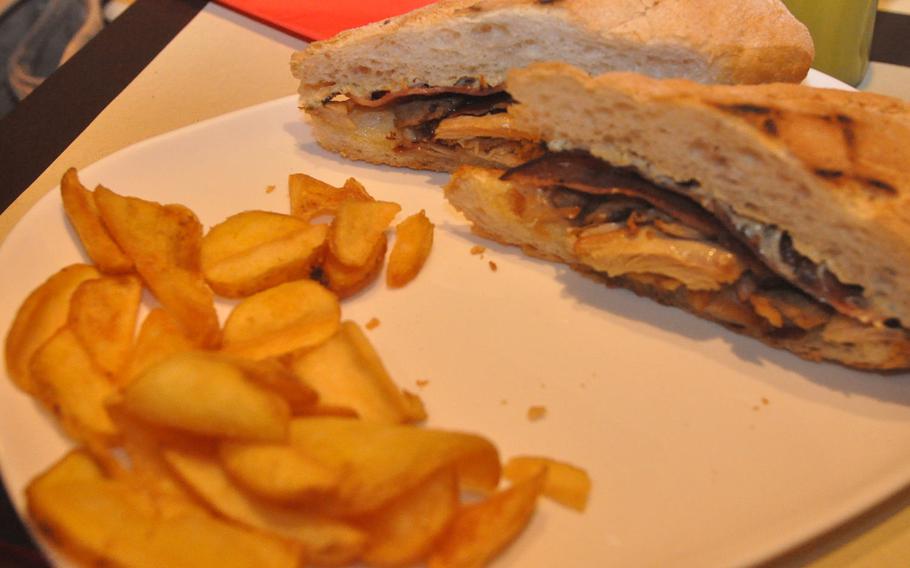 Buy Photo
The ''Indian,'' which features shredded grilled chicken, bacon, Montasio cheese and a house sauce, is the most popular sandwich on the menu at Rico's. But there are about 75 others to choose from as well. (Kent Harris/Stars and Stripes)

One doesn’t have to live in Italy for long to realize that Italians have a particular fascination with the United States and England circa the 1950s or 1960s. Elvis, James Dean, Marilyn Monroe and the Beatles seem to be more iconic than many modern-day celebrities.

So although many of its customers weren’t alive in those decades, Rico’s in Pordenone offers plenty of photos, posters and memorabilia to make those who look back with fondness on the not-so-distant past — whether Italian or American — feel at home.

The restaurant, owned by Enrico Focone and Silvia Bortoluzzi, has been open for about six years, and the sandwich is king here. More than 70 — grouped by theme — are featured on a menu that’s fun to explore even if your Italian isn’t that great.

The themes themselves are a bit easier to recognize than the reason they’re grouped (presumably it’s the ingredients).

Ingredients range from the usual meats and cheeses, mostly Italian, to the not-so-common on Italian or American sandwiches: Egg? Artichoke? Mushrooms? Shrimp? All are featured in various combinations, and the result is somewhere between an Italian panini and a traditional sandwich for most Americans.

The most popular sandwich, according to Andre Poiana, who prepares much of the food, is “The Indian”: grilled, shredded chicken, bacon, Montasio cheese and a house sauce on a large, freshly baked bun. Why it’s called “The Indian” is unclear, but it tastes good regardless.

Each sandwich is served with a smattering of french fries that look like they’ve been overcooked. But looks are deceiving. They’re very tasty. Though the amount of grease and salt means it’s probably a good idea to get in some extra PT.

Rico’s in Pordenone Directions: Address: Via Piave 26, Pordenone, Italy. Coming from Aviano, take the SS-13 south through Pordenone. Turn right on the small, one-way road halfway up the first overpass. Turn left at the stop sign. The restaurant is on the right after a few blocks. The best parking options are on the sides of the road in this area as well.

Food/drink: Sandwiches range from 7.50 euros (about $8) to 15 euros; international label beer on tap or by the bottle.

Menu: In Italian, but staff speaks English. English menu is under construction.