Regensburg Museum of History houses a trove of art, arms and artifacts 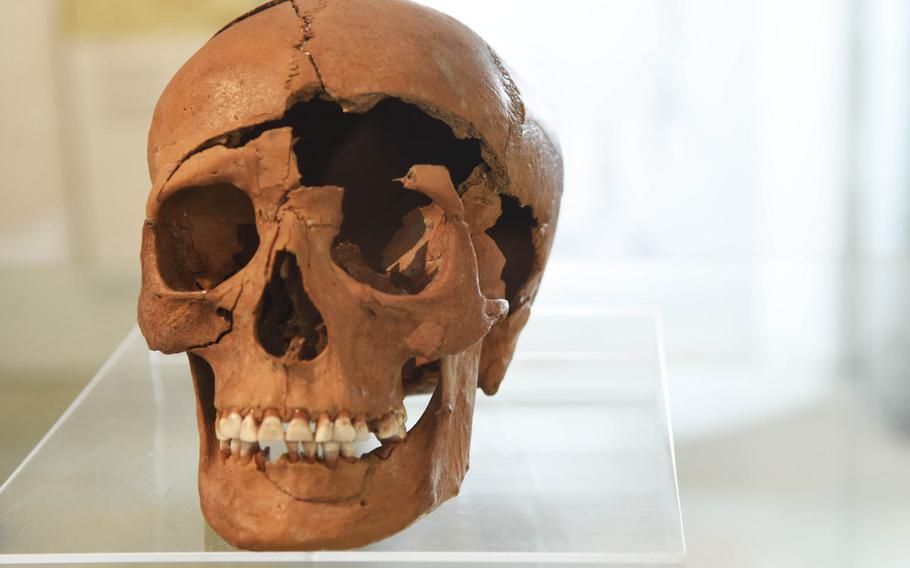 Buy Photo
The skull of a man from the Roman era found near Regensburg, Germany. Regensburg was a Roman fort on the edge of the Roman Empire called Castra Regina. (Martin Egnash/Stars and Stripes) 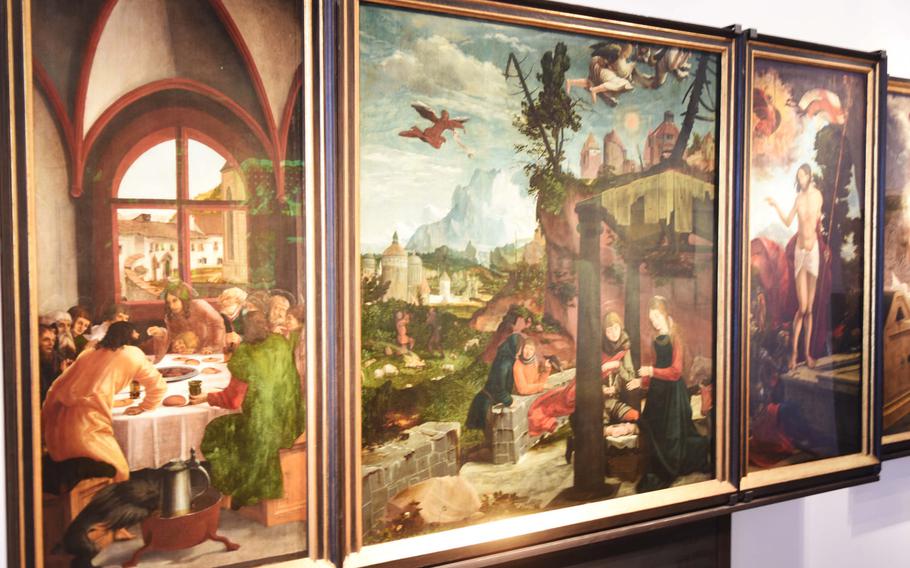 Buy Photo
Several religious paintings from the Middle Ages on the second floor of the Regensburg Museum of History, Germany. (Martin Egnash/Stars and Stripes) Buy Photo
Coins from the Roman Empire and Germanic tribes at the Regensburg Museum of History, Germany. (Martin Egnash/Stars and Stripes)

If you’re a history buff stationed in the Grafenwoehr Training Area in Germany and you’re used to thinking 1776 was long ago, you might want to reconsider your definition of “old.” Bavaria is an ancient land, loaded with history at every turn.

The Regensburg Museum of History, a one-hour drive from Grafenwoehr, is a treasure trove of eastern Bavarian culture, stretching from the Stone Age through the late Renaissance. The museum highlights Regensburg’s important position throughout history, with a wide variety of authentic arms, art and artifacts.

The museum is housed in a medieval monastery built in 1221, located in Regensburg’s old town, just a stone’s throw from the famous Gothic cathedral dedicated to St. Peter.

The museum is split into sections devoted to ancient history and the Middle Ages. The ancient section makes up most of the ground floor and is dominated by extensive artifacts from the Roman era.

In ancient times, Regensburg was a fort and trading post known as Castra Regina, located at the northernmost edge of the Roman Empire. For centuries, it stood as the bulwark against the untamed barbarian north, and it was one of the few places where Romans and Germanic tribes lived next to one another. This proximity accounts for why the museum has so many objects of Roman and ancient Germanic origin.

The Roman section includes artifacts from the Temple of Mercury, located nearby, and coins, pottery and weapons.

The Stone Age section features prehistoric tools and skeletons of the earliest inhabitants of eastern Bavaria, such as a giant cave bear and the remains of the oldest human found near the city, known as the “First Regensburger.”

The Middle Ages section takes up the next two floors of the museum. This brings you through the rise of Regensburg as an independent duchy, ruled by the very first Bavarian tribe, until it was captured by Charlemagne and incorporated into the Kingdom of the Franks.

The city then served for some time as the de facto capitol of Bavaria as a free imperial city of the Holy Roman Empire. The museum has an extensive collection of objects from this period, including numerous religious paintings and carvings. The medieval weapons collection contains several of the renowned German two-handed swords and a 16th-century bronze cannon.

“Regensburg had special status in the (Holy Roman) Empire and has a lot of history,” Andrew Snyder, an American tourist visiting the museum, said. “I really like all of the content here. I haven’t even been halfway through the Middle Ages yet, and I think it’s spectacular.”

The Regensburg Museum of History

Located 65 miles south of Grafenwoehr. It can be reached in an hour via A93. Don’t confuse the city with Regensberg, a small village in the same region.

5 euros ($5.30) entry per person. The exhibits are entirely in German, but audio guides are available for 2 euros ($2.11), which give detailed explanations in English.

There is a cafe serving coffee, baked goods and sandwiches on the ground floor.