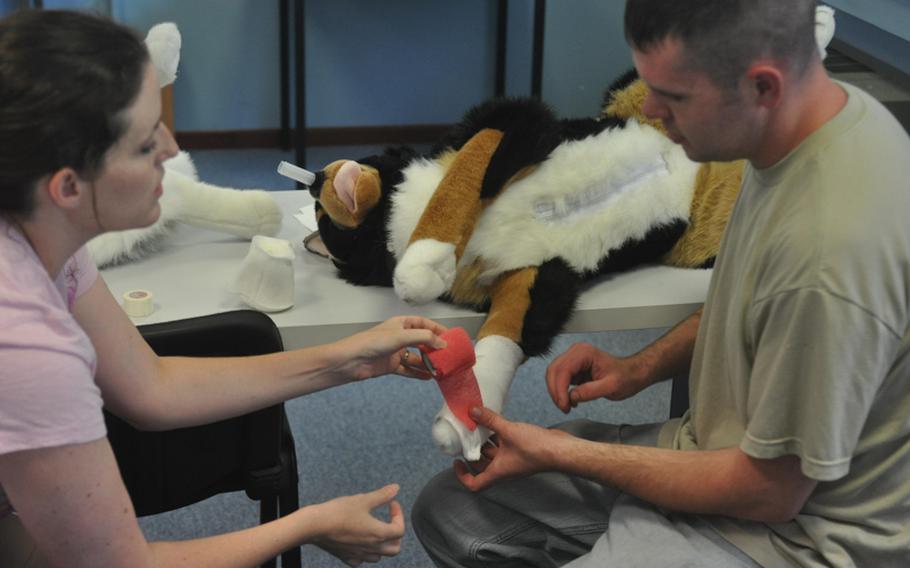 Nicole Robarge, a civilian veterinarian at Aviano Air Base in Italy, helps Philip Brown, a staff sergeant stationed at Aviano, apply a bandage to a dummy dog during a class on applying first aid to dogs sponsored by the American Red Cross. (Kent Harris/Stars and Stripes)

Nicole Robarge, a civilian veterinarian at Aviano Air Base in Italy, helps Philip Brown, a staff sergeant stationed at Aviano, apply a bandage to a dummy dog during a class on applying first aid to dogs sponsored by the American Red Cross. (Kent Harris/Stars and Stripes) Philip Brown, a staff sergeant stationed at Aviano Air Base, Italy, practices CPR on Shadow, one of two dummy dogs used in an American Red Cross class on first aid to dogs. (Kent Harris/Stars and Stripes) 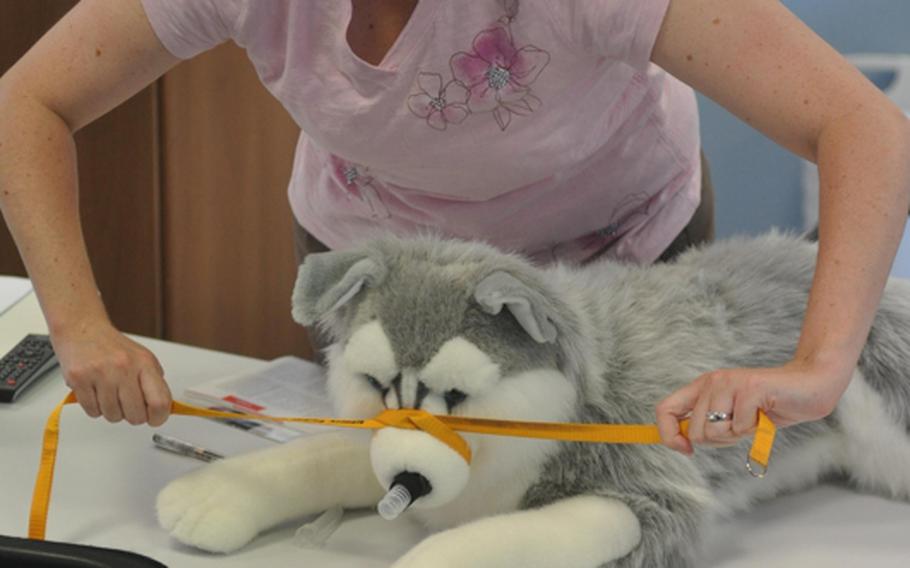 Nicole Robarge, a civilian veterinarian who works at Aviano Air Base, demonstrates how to use a leash as a muzzle during a class on applying first aid to dogs. The class, offered by the American Red Cross, provided tips on taking care of man's best friend. (Kent Harris/Stars and Stripes) 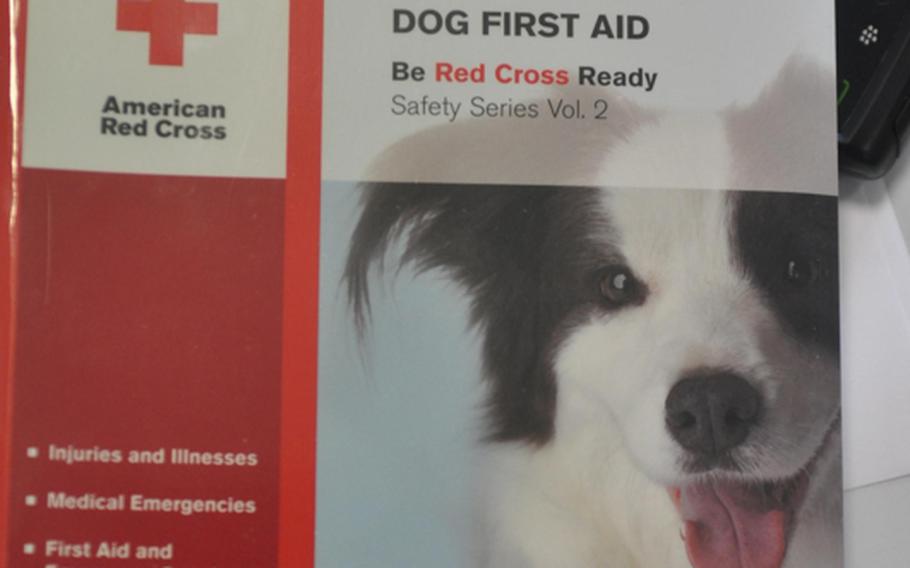 First aid classes for humans on taking care of dogs? Some might think it a funny idea, but there's enough interest for the American Red Cross to come up with a curriculum for the subject. Those attending classes at Aviano Air Base, Italy, get a book, a DVD and four hours of instruction from the base veterinarian. (Kent Harris/Stars and Stripes)

If 8-month-old Bianca or 2-year-old Max is hurt or in a jam, they can always count on a dog&rsquo;s best friend to help them out &mdash; especially if that best friend is Phillip Brown.

Brown, an Air Force staff sergeant, made sure that he would be more than capable of helping out his canine companions if and when they needed it by attending a class at Aviano Air Base in Italy sponsored by the American Red Cross.

Labeled in a base publication as &ldquo;Dog CPR,&rdquo; the class turned out to be a lot more. While instructor Nicole Robarge, a civilian veterinarian on base, covered a wide range of first-aid topics and techniques, she also touched on enough side issues that the class could be called &ldquo;Dog Care 101.&rdquo;

What&rsquo;s the best way to approach a dog without getting bitten?

When do you need to visit the vet?

How much food and water should you have on hand in case of an emergency?

Why should owners keep a first-aid kit around the house for their pets?

Robarge provided all the answers, with help from a publication put out by the Red Cross: &ldquo;Dog First Aid.&rdquo; Brown got a copy &mdash; DVD included &mdash; for attending the class.

Christine Splattstoesser, a field office assistant in Aviano, said it&rsquo;s up to each Red Cross chapter on U.S. military bases around the globe on whether they want to offer such classes. Phyllis Marvin, who runs the Aviano office, said she had seen a lot of interest in such classes in Okinawa, Japan, before she moved to Italy, so she decided to give it a try here.

&ldquo;It was very popular there,&rdquo; she said. &ldquo;It&rsquo;s taking a while to get started here.&rdquo;

Brown &mdash; the only student on this day &mdash; had a lot of interaction with the instructor. With the help of a pair of dummy dogs named Shadow and Snowflake, Robarge went through potential problems that dogs could encounter, and methods to at least stabilize them until further care could be sought.

Brown proved an apt student. He said he&rsquo;s had (human) first-aid training and some practice getting Bianca, a husky, out of trouble already. His red-and-white bandage on Shadow was impressive enough that Robarge and Splattstoesser joked about not taking it off.

CPR &mdash; cardiopulmonary resuscitation &mdash; took up only a small part of the class. That&rsquo;s partly because there was so much other stuff to go over, Robarge said. But also because &ldquo;most of the time when you do CPR with a dog, it will not work,&rdquo; she said. &ldquo;If you&rsquo;ve gotten to the point where you&rsquo;re doing CPR, there&rsquo;s a good chance the dog isn&rsquo;t going to make it.&rdquo;

That doesn&rsquo;t mean an owner shouldn&rsquo;t try, however, she said. Especially if they know how.

The technique varies somewhat from the version used on humans. For larger dogs, the mouth-to-mouth part is instead mouth to nose, with the human holding the dogs&rsquo; jaws shut (tongue extended) so the air doesn&rsquo;t escape. Mouth to mouth wouldn&rsquo;t be effective since human and dog mouths are shaped differently, Robarge said.

Many first aid techniques are similar to ones used on humans, though. Responders are urged to use the ABCs in case of emergency: airways, breathing and circulation.

Dogs that are hurt often don&rsquo;t make good patients, Robarge warned. So she demonstrated how to create a muzzle from a leash to keep the dog from biting and how to immobilize the animal before providing aid.

Snowflake and Shadow didn&rsquo;t provide much resistance. Bianca and Max, an Italian mutt, would likely be harder to treat. But Brown, married with no children, indicated he was willing to try. Attending a four-hour class on a three-day weekend was one sign of his commitment.

&ldquo;We treat our dogs like they are our children,&rdquo; he said.

Robarge said most American pet owners feel the same way. &ldquo;Ninety-five percent of the people who come into the clinic want to do the right thing,&rdquo; she said. &ldquo;They want to do right by their animals.&rdquo;

Dogs aren&rsquo;t the only ones to receive special book treatment from the Red Cross. There&rsquo;s also one geared for cat owners. Aviano has a cat dummy similar to Snowflake and Shadow, though it doesn&rsquo;t have a name yet. It&rsquo;ll get one, though, Splattstoesser said, if the chapter decides to start offering classes for friends of felines.

Taking a classPet owners interested in taking classes on caring for their dogs or cats can contact their local American Red Cross chapters to see if they&rsquo;re offered locally.Aviano&rsquo;s four-hour class on dog first aid costs $35 per person or $50 per family. The fee includes a Red Cross book and DVD titled &ldquo;Dog First Aid,&rdquo; which participants can keep.